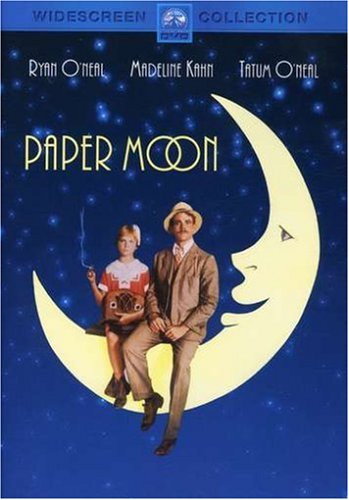 The more depressing something is, the harder we need to laugh, and “Paper Moon” (1973, rated PG) offers just the right combination of anguish and glee. Check it out at 6:30 p.m., Thursday in Mesa Public Library’s upstairs meeting room theater.

Director Peter Bogdanovich’s Depression-era comedy begins in a Kansas cemetery. Nine-year-old Addie Loggins (Tatum O’Neal) has just lost her mother. When traveling salesman Moses Pray (Ryan O’Neal) arrives to pay his respects, Addie’s neighbors talk him into driving Addie to the home of her only living relative, an aunt in St. Joseph, MO.

Pray has the parenting skills of a popped balloon, but off they go, and he immediately uses her tragic situation to the profitable tune of $200. It’s the start of a propitious partnership for both Addie and “Moze,” as long as you don’t think for a second about Addie’s future.

Are 9-year-olds smoking cigarettes funny? No, but “Paper Moon” never takes itself too seriously, and that’s its beauty.

As the two drive from town to town, they pick up the inimitable Trixie Delight (Madeline Kahn), who has to “winky tinky” every few miles and who would, according to her maid Imogene (P.J. Johnson), “drop her pants down in the middle of the road” for $25. She and Addie don’t exactly mesh, and at one point Addie refuses to get back in the car.

In one of the film’s many moments of simply amazing screenwriting, Delight tells her, “I’m gonna level with you, okay? Now, you see with me it’s just a matter of time. I don’t know why, but, somehow I just don’t manage to hold on real long. So, if you wait it out a little, it’ll be over, you know. I mean, even if I want a fella, somehow I manage to get it screwed up. Maybe I’ll get a new pair of shoes, a nice dress, a few laughs. Times are hard. No, if you fool around on the hill, up here, then you don’t get nothin’. I don’t get nothin’. You don’t get nothin’. So, how ‘bout it, honey?”

It’s good fun, but it’s not “Matchstick Men”; don’t expect anyone to grow up.

With “Paper Moon,” based on the novel, “Addie Pray” (1971) by Joe David Brown, Tatum O’Neal became the youngest-ever winner of an Oscar for Best Actress in a Supporting Role (1974) at 10 years old. Kahn was also nominated for the award, and the film was nominated for Best Writing, Screenplay Based on Material from Another Medium and Best Sound. In addition, it was nominated for six Golden Globes (including a win for O’Neal as Most Promising Newcomer – Female) and won several other awards around the world.

All screenings in the Mesa Public Library Free Film Series are free of charge, thanks to the Friends of Los Alamos County Libraries. The library shows movies on the first Thursday of nearly every month.