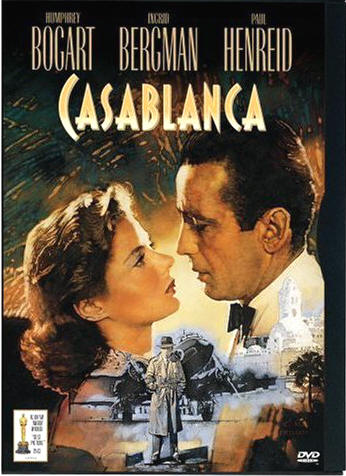 “Here’s looking at you, kid.” “We’ll always have Paris.” “Round up the usual suspects.” “Of all the gin joints in all the towns, in all the world, she walks into mine.” “Louie, I think this is the beginning of a beautiful friendship.”

Regardless of whether you have actually seen “Casablanca,” you have probably heard a few of these quotes before. But nothing compares to hearing them in their original context.

Moviegoers will have a chance to see “Casablanca” again or for the first time at 6:30 p.m. Thursday, May 1, at Mesa Public Library as part of the library’s Free Film Series.

Since its release in 1942, three-time Oscar winner has been quoted, awarded, touted, referenced and generally adored around the world. It would seem Humphrey Bogart and Ingrid Bergman still have everyone convinced: This is love. This is war. This is the definition of bittersweet.

Specifically, this is World War II, in the bustling Moroccan town of Casablanca, where European refugees come and often stay for quite a while, hoping to find passage to the United States. Bogart plays Rick Blaine, a dark, brooding entrepreneur who becomes slightly less enigmatic once Bergman, as Ilsa Lund, walks into his gin joint.

Her husband (played beautifully by Paul Henreid) walks in, too, but who cares? This is Hollywood ─ old Hollywood, where every line is loaded with wit, allure, mystique, fantasy, and the promise that the world onscreen will never be ordinary. It is silver, all the way through.

“Casablanca” is not just good, it’s fun. It’s serious and important, sure, but mostly, it’s 102 minutes where you can forget about yourself completely and inhabit another, dreamier life.

The Free Film Series presents a movie the first Thursday of nearly every month, thanks to the Friends of Los Alamos County Libraries. On June 5, the library brings “City Island” back to the big screen, followed July 10 by “Vicky, Christina, Barcelona.”