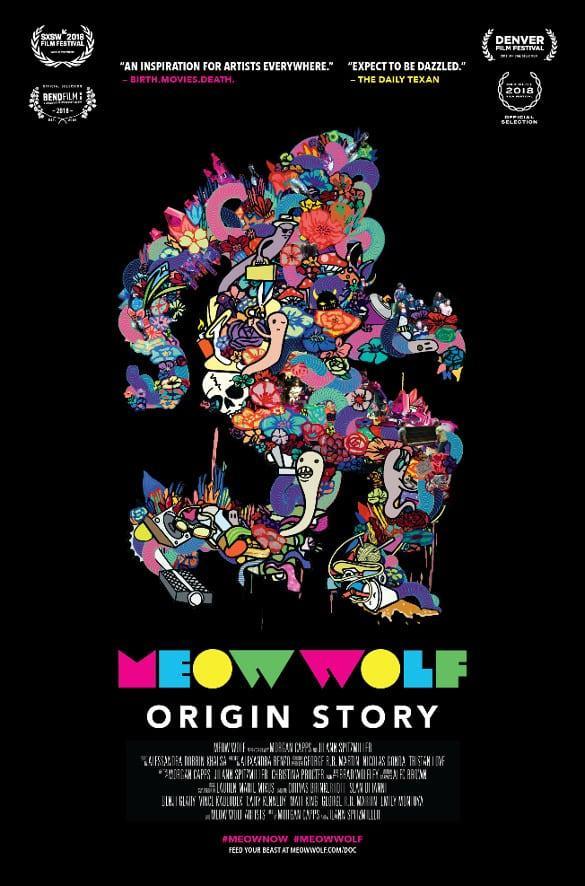 MEOW WOLF News:
SANTA FE ― When artists dumpster dive to survive, they aren’t looking to change the world—but once in generation: it happens.
Meow Wolf: Origin Story is a fascinating and uncommonly inspiring feature-length documentary that presents the heartfelt drama of a ragtag gang of artists on the fringe of society in a small town who change the art world on the way to international acclaim.
In just two years, over a million visitors have thrilled to the group’s stunningly unique, mind-bending ways at the award-winning House Of Eternal Return where the infinitely unfolding “multiverse” reveals portals between mundane, everyday normalcy and dazzlingly interactive worlds previously only thought possible in dreams. Now many millions more will discover this new way of perceiving space and time with the film set to premier on over 600 screens in over 150 cities in all 50 states on November 29 and through digital streaming and home video later this fall.
Origin Story, however, is not just a documentary. The film is a distinct expression of Meow Wolf creative force, produced to provoke fresh conversations with audiences of all ages and initiate new possibilities for creators and especially creative communities.
Meow Wolf will donate a portion of each ticket sold to the company’s annual DIY Fund that supports up-and-coming art and music spaces nationwide. The film will also be available for events in schools, art spaces, businesses, and community centers starting December 1 and Meow Wolf will provide a discussion guide and “Feed Your Beast” toolkit to help spark creativity. For details, visit MeowWolf.com/Doc.
“The Meow Wolf story is the story of DIY, creatives and entrepreneurs everywhere,” CEO Vince Kadlubek said. “Origin Story is the enduring power of the underdog who overcomes all obstacles through community, heart and hard work. The American Dream has taken a beating for decades by those who refuse to value artists and creativity, but the message today is the same as ever: never give in and never give up.”
From Dumpster Dive To Name In Lights
Directors Morgan Capps and Jilann Spitzmiller reveal one of the most high-adrenaline and unlikely success stories you’ll ever see. Meow Wolf: Origin Story takes us through the meteoric rise of a penniless, anarchic art collective as it attracts the support of Game of Thrones creator George R.R. Martin and morphs into a multi-million dollar corporation in just a few short years.
When House Of Eternal Return opens to instant success, the group sets its sights on new exhibits around the world. How does a chaotic team of free-spirited artists become one of the most compelling new startups of this generation—and what will they do next? Meow Wolf: Origin Story follows the seven eclectic founding members and hundreds of volunteers as they struggle with fracture, loss, success, and failure over a decade while constantly redefining themselves and what art can be. The film is an artistic explosion in and of itself as it throws down a kaleidoscope of color, sound and music that brings this crazy, highly inspiring ride to life.
“Meow Wolf was a fringe Santa Fe collective that asked me to buy an old, long-empty bowling alley in an industrial part of town for a big, wild vision they had of a new way to tell stories while presenting art to people of all backgrounds and tastes,” George R.R. Martin said. “They were bold, visionary, committed to community and determined not to give up on their dream. They baited the hook well with the fantastic nature of the story and went on to exceed everyone’s highest hopes including my own. Meow Wolf: Origin Story is another fantastic Meow Wolf tale—and it’s all true. If you want to know what’s happening in art and storytelling now, I encourage you to see it.”
Keeping It Real
Meow Wolf has elevated the possibilities for experiential art and the experience economy beyond trend and into a generational movement. The group has also reset the trajectory of arts and economy by paying artists at levels commensurate with other high-demand professions and by donating generously to community.
Now Meow Wolf wants to engage artists, students, fans of art, cultural enthusiasts, documentary aficionados, entrepreneurs, dreamers and change agents directly through this release. The group invites everyone into a sensorium that transforms our norms and inherited expectations of space and creativity into exhilarating new realities that awaken spirit and conjure great joy and inspiration.
One Big Night In America: Over 600 Theaters From Coast To Coast
Fathom Events will present Meow Wolf: Origin Story in more than 600 select movie theaters nationwide at 7:30 p.m., Nov. 29 local time. At the end of the film, there will be a special bonus screening of a twenty-minute Q&A featuring George R.R. Martin, the filmmakers, and Meow Wolf founders at the historic Lensic Performing Arts Center in Santa Fe. You can purchase tickets at MeowWolf.com/Doc and participating theater box offices. A complete list of locations is available at the site.
“We are pleased to bring Meow Wolf: Origin Story to audiences across the nation,” Fathom Events CEO Ray Nutt said. “We are always seeking to provide our viewers with new cinematic experiences and Meow Wolf is a one-of-a-kind inspiring and creative experience we cannot wait to share.”
Portal To Roll Your Own
Beyond the big screen, later this fall audiences can stream a high-definition personal copy or purchase a Blu-ray or DVD. Special features include deleted scenes, incredible archival footage, a filmmaker commentary, and an interview with George R.R. Martin discussing art and science fiction. If you have someone in your life—artist, entrepreneur, or anyone with a dream—the film is a powerful and affordable holiday gift that uplifts the soul as it reminds us all that nothing is impossible when you stand by your vision with imagination, community, and good old American ingenuity.
For more on Meow Wolf: Origin Story, visit meowwolf.com/doc.
Menu
Los Alamos
88°
Fair
5:49am8:25pm MDT
Feels like: 88°F
Wind: 13mph WSW
Humidity: 7%
Pressure: 30.16"Hg
UV index: 3
WedThuFri
90/63°F
82/61°F
84/61°F
Weather forecast Los Alamos, New Mexico ▸