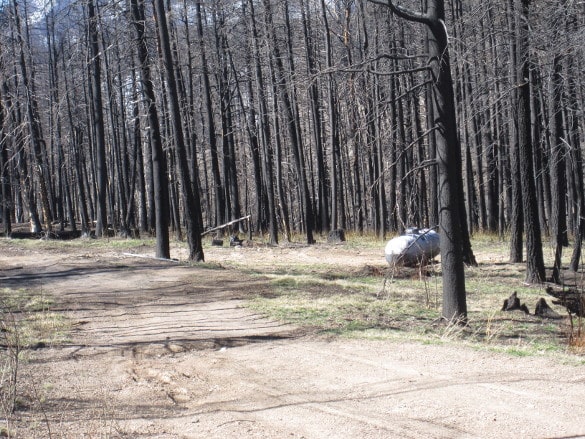 Where a beautiful cabin stood prior to the Las Conchas Fire in 2011, one of the many that burned in the area of Dave Menicucci’s ranch just south of the Valles Caldera National Preserve. Courtesy photo
By DAVE MENICUCCI
Jemez landowner and retired national lab researcher
“Look, I am from Nebraska and I bought this vacation place for the trees. If it burns down, I will take my insurance money and buy another place in the trees.” This is what a homeowner in La Cueva said about the dog-haired tinderbox where his well-oiled, all-wood cabin rests.
Next to him live full-time residents, Ben, a recent retiree, his wife Sharon, and their dog. Their attitude is the exact opposite. They enthusiastically thin trees around their home, protect firewood in a shed, store fuels such as gasoline well away from the house, prepare evacuation plans, and sign up for the county’s Code Red alert system. Everything they own is in their property and insurance money cannot replace it. One of their biggest worries is their part-time Nebraskan neighbor, who does nothing but let fuels accumulate.
These people exemplify one of the intractable dichotomies facing those of us who work to mitigate wildfire danger: The wildfire-risk tolerance varies tremendously depending on whether a property is a vacation cabin or a full-time abode. Of course, not all property owners can be classified into these two extreme positions, but the correlations are evident to any observer.
What the Nebraskan does not understand is that the risk is not only to his property, but his ignorance imperils others, including his grandchildren who frequently visit, as well as neighbors. He is a community nuisance who selfishly impacts the value of neighboring properties with irresponsible behavior.
Nothing can be done by law to force him to act reasonably. There are no wildfire risk mitigation codes or standards in which local building authorities might condemn the property or issue a notice of forced vacancy, as would be the case if severe structural damage imperiled the safety of the occupants. Virtually no public official or politician muses about codifying wildfire-risk-mitigation standards, so nothing is in the offing at government level.
Property-insurance underwriters have begun to address the problem, and Jemez is one of their areas of interest. In an increasing number of cases, clearing trees in a specified distance around structures is required to qualify for insurance. In spite of the trend, many insurers still require nothing but regular premium payments.
So, what can a thoughtful property owner do? Most importantly, learn everything possible about wildfire risk mitigation and do anything reasonable to protect property and lives.
One of the most important actions is to prepare a clear area around the home so that in the worst case where evacuation is not possible, it can be used to shelter-in- place. The home will then also have a good chance of surviving a surrounding wildfire. The second action is to prepare for evacuation.
In April, the Greater Eastern Jemez Wildland/Urban Interface Corporation will sponsor a series of Firewise weekend events that will focus on helping property owners prepare for the upcoming fire season. The events will occur mostly in Jemez Springs and local newspapers will contain notices of times and venue.
At the events, information will be provided that describe steps to mitigate risk. Experts will be available to consult with residents, such as Ben and Sharon, who face difficult problems.
The Firewise events will provide opportunities for everyone to learn what to do to save our beautiful, forested community from destruction. Most of the Jemez Mountain communities are at extreme risk, according to Sandoval County’s Community Wildfire Protection Plan.
Now is the time for productive action to avoid the unproductive action of running from a wildfire that can consume all that is left behind.
Menu
Los Alamos
28°
Mostly Cloudy
7:12am5:19pm MST
Feels like: 18°F
Wind: 11mph S
Humidity: 74%
Pressure: 30.21"Hg
UV index: 0
ThuFriSat
37/23°F
39/27°F
37/23°F
Weather forecast Los Alamos, New Mexico ▸