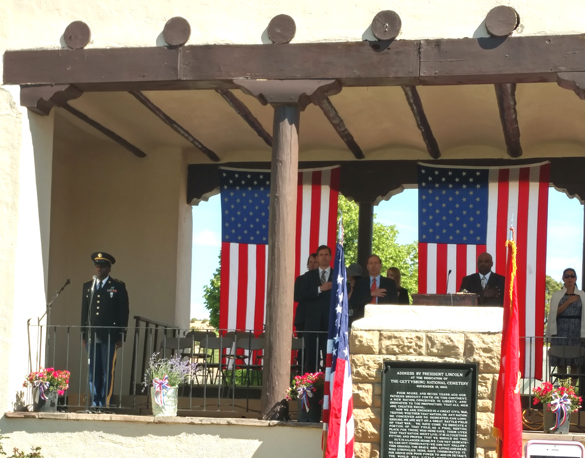 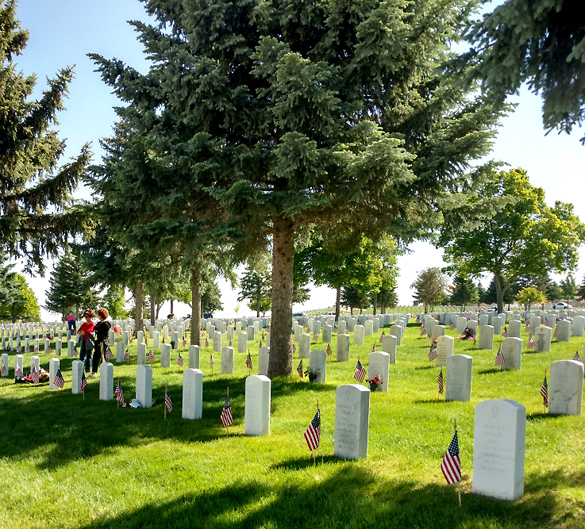 Volunteers put a flag on every grave for Memorial Day at Santa Fe National Cemetery. Photo by Roger Snodgrass/ladailypost.com

Northern New Mexico remembered its loved ones this Memorial Day at the Santa Fe National Cemetery, with patriotic music military ceremonies and traditional meditations on historyharking back to Abraham Lincoln.

“This day is a different day from other occasions,” said Sen. Tom Udall, New Mexico’s senior Democratic Senator. “First and foremost it is a day of mourning when we remember those who have been taken from us by the horrors of war, those who gave the last full measure of devotion for a country and a cause.”

Expressing the state’s pride in military service, Udall thanked the veterans present and the families of those who gave their lives in World War II, Korea, Vietnam, Iraq, Afghanistan, and “everywhere they were called to serve.”He recalled that the cemetery had its origin shortly after the Civil War, when a burial place was needed for soldiers who fought with the Union against the Confederates of the south.

Then too, remembrances were also required for the Americans who continue to be engaged in conflicts overseas.‘Today we celebrate their memory. We do not forget them. Thank you so much for being here and honoring our best. Thank you,” Udall said.

Speaking next, Sen. Martin Heinrich elaborated on the Battle Of GlorietaPass, recalling the volunteers from Colorado, California and New Mexico who met Confederate soldiers from Texas at a high mountain passage where the Santa Fe Trail emerges from the Sangre de Cristo mountains.

“The leader of the NM volunteers, Lt.-Col Manuel Chavez from Atrisco, led the battle’s decisive attack, destroying the confederate supply train and forcing their eventual retreat out of New Mexico and the Southwest for the remainder of the war, “said Heinrich.”Those may have been the first military heroes from New Mexico, but they were far from the last. New Mexico’s spirit of service and sacrifice continue to this day – from Navajo Code talker and Bataan Death Marchers, to women who served in the Navy and as supplypilots in WWII; to Korean and Vietnam war GIs to men and women serving in Iraq and Afghanistan.”

Just last January, people all over the country paid homage to Staff Sargent Matthew McClintock, a tragic home-town hero from Albuquerque who died in a firefight in Afghanistan, leaving his wife and infant son.

Director of the Santa Fe National Cemetery James P. Sanders was Master of Ceremony for the celebration. He pointed out that there were 133 national cemeteries, of which Santa Fe is the 25th busiest, accommodating about 800 burials each year. There are presently about 50,000 burials altogether.

“During a time of armed conflict, America’s military has been made up mostly of civilian, ordinary people who respond with to their nation’s call with two to four years of service; farmers and factory workers, dairy men and doctors, teachers and technicians; ranchers and roughnecks, dads and daughters who surrendered some of the best years of their lives to preserve our nation’s security to preserve the values we hold so dear and protect freedom-loving people  around the world,” he said.

The benediction by Chaplain Jose Villegas, was a version of the traditional Navajo “Walk in Beauty” prayer:

Creator, I ask that you bless all living creatures

the two-legged, the four-legged,

the winged ones of the air, creatures of the water,

and us humans who are living and all those who have gone before us especially those who are honored today.

Creator, fill our entire being with love to walk in beauty, beauty before us, behind us, above us, below us. May all around us be beauty.