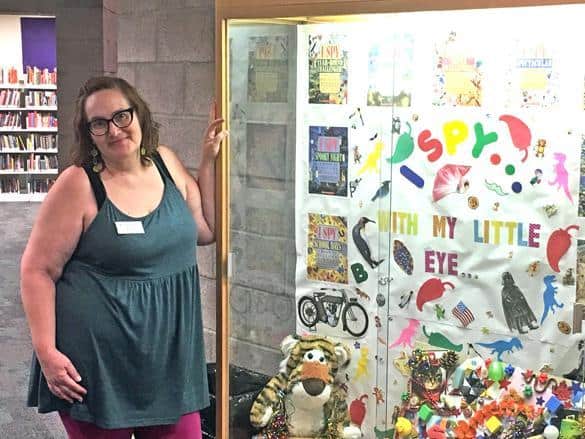 Melissa Mackey started out as a part-time employee at the Los Alamos County Library; 16 years later she rose through the ranks to become the Youth Services Director.

Mackey officially began her new position June 2 although she had served as the acting director since January. Previously, the position was held by Angie Manfredi and prior to Manfredi, Liz Laemmle.

Before earning her new title, Mackey was second in command in the Youth Services department as the Senior Library Specialist. Even though Mackey just stepped into her new job, she has big plans for the future.

“Because I have been here so long I have a lot of ties to the community,” Mackey said. “I really want to plan community partnerships and collaborations. We have so many wonderful programs, businesses and nonprofits. I think we can do better if we communicate more.”

Partnerships are already in the works. Mackey said this summer, the library is partnering with the Pajarito Environmental Education Center, the Los Alamos High School library and the Teen Center.

For instance, “I have an idea that I would like to collaborate with Rec., PEEC and the Duck Buddies and do fundraisers to get feeders at (Ashley) Pond,” Mackey said.

She added she hopes to provide books about ducks and educate people about not feeding bread to the ducks.

Another objective is to do story walks throughout town. Mackey said the idea is to print stories on large posters and read the aloud the story while walking to different places in town such as the Los Alamos Nature Center. She added she would love to do Music and Movement programs at the senior centers.

Collaborations are beneficial, Mackey said, because “I just think that rather than everyone trying to do everything we can work together (and) we can do more quality programming.”

Speaking of programming, the library kicked off its summer reading program June 3 and Mackey listed a few of the program’s highlights.

A summer solstice event is scheduled 4-6 p.m. June 21 at the White Rock Branch Library. Mackey said participants will welcome in summer by planting seeds, playing drums and face painting. Then, July 20, the library will celebrate the 50th anniversary of man walking on the moon with a moon landing party. Mackey said the library will offer an Escape Room. She encourages families to call 505.662.8258 to make reservations for the Escape Room.

This is in addition to the library’s regularly scheduled programs, which include a weekly gamming program for teens. Mackey said video games, board games and everything else is pulled out for teens. She added the staff are always open to suggestions for the new activities.

For the younger crowd, those 4-8 years old, the library offers Ready, Set, Read. Mackey explained it helps combat the “summer slide,” which is when some students’ reading and writing skills start to slip during summer vacation.

It’s a lot of work but Mackey said she is really enjoying her new position.

A career in library science was not her first choice growing up, Mackey said, but she always had a passion for people, books and organization.

Plus, she likes hanging out with kids.

She got introduced to Los Alamos County Library through her husband and her mother-in-law, who both worked at the library.

“We’re really fortunate in Los Alamos to have such a stunning building with room for all generations … with a great collection,” Mackey said.

She added that the Friends of the Library provide incredible support to the Youth Services.

Mackey said the entire community supports the library; adding that it is a gathering place for many people.

“The community nature of it really resonates with me,” she said.

To be able to work at the library is a dream, Mackey added.

“I’m elated,” Mackey said. “I have had the privileged to work with Liz Laemmle and Angie Manfredi. I’ve also taken lots of program classes. I just hope I can carry on the legacy, the community connectivity … and put my own stamp on it.”