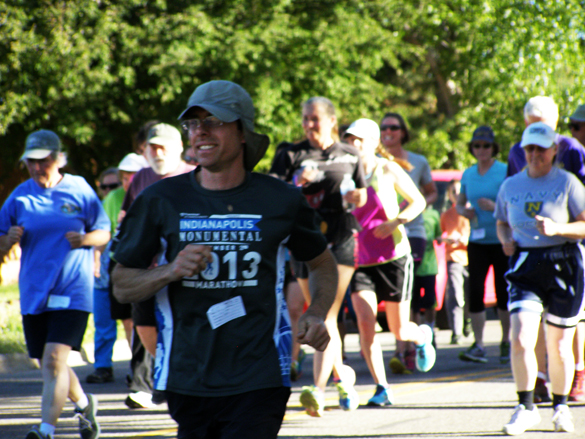 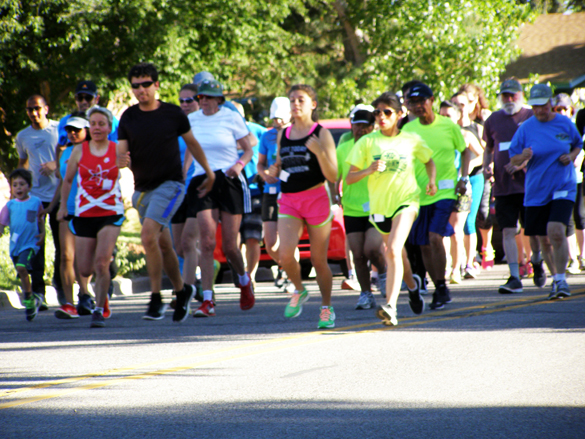 In a great turnout, 48 runners and walkers enjoyed a warm dry evening for the one, two, three and four mile pace race courses on Barranca Mesa. All finishers were treated to cool watermelon.

In the one mile course around Navajo, Los Pueblos and Barranca Roads, Melina Burnside had the best prediction, only .45 seconds off her prediction for an adjusted delta of 1.35 seconds off.

In the three mile road course around Navajo, down almost to the end of Los Pueblos and back around Barranca Road, Nikol Strother had the best prediction of 71 seconds off followed by Sam Crooks at 118 seconds off of his prediction.

The two mile trail course went out on to the Deer Trap Mesa trail, taking the south folk for an out and back run (or hike). Predictions were hard make on the trail runs. Jeanette Trujillo Rondeau was the best predictor at 130 seconds off her prediction. Inez Ross did two loops of the 1 mile paved course, in preparation for doing a 5K at the Senior Olympics, and was 94 seconds off of her prediction.

Twenty runners took on the challenge of the 4.12 mile Deer Trap Mesa loop trail that Craig Martin and the Youth Conservation Corps recently established. The tips of three mesas were reached for some great views. Numerous blooming yucca plants encouraged the runners along the trail as did some cactus and Indian paintbrush. Eric Anderson was the best predictor at 46 seconds off his prediction, followed by Ryan Smeltzer at 88 seconds off and Sanna Sevanto at 118 seconds off.

Next Tuesday night’s pace race begins at 6 p.m. at Burn Mesa Trail on N.M. 4, a few miles after turning left at the back gate. Call 505.672.1639 or visit the Club’s website at: http://www.atomicrunners.com for more information.