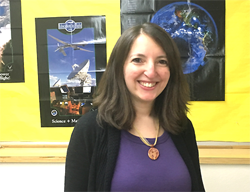 Her path to landing the job started with a walk around Ashley Pond. Renner was hanging out with her kids and a friend. Her friend introduced her to Carter Payne, Topper Freshman Academy Principal.

She told him that she used to be a physics teacher. That got his attention. They exchanged emails and right before winter break, he emailed her saying one of the physics teachers was moving. Would she be interested in the job?

“I had always thought that when my children when to school, I would start subbing and see how it goes. But this came up, and I said, ‘Wow! It seems too good to be true. I feel really lucky.’”

How did she become a teacher?

Renner got her Bachelor’s degree in Physics, with a minor in Math, at the University of Cincinnati. She went on to Boston University where she started work on her Ph.D. While at Boston University, she was required to teach the freshmen Physics course. While other grad students seemed to think it was a drag to teach the freshmen, Ali loved it.  “It was fun, and I realized that I looked forward to my teaching more than my own classes and the research that I was doing.”

That was the moment she realized that she loved teaching.

Up until that point she had never considered teaching as a career. Once she realized that she was, indeed, a teacher, she decided to finish her Master’s degree and teach. She said, “Rather than a physicist who left to go into teaching, I feel like I’m a teacher who happened to have gone into physics.”

She finished her Master’s in January 2001. Then an unexpected opportunity opened up at Boston University.

They needed someone to teach the 8 a.m. lecture section of the class that Renner had been a teaching assistant for during the past year and a half. Someone suggested that she do it. She said, “There was a big controversy because I only had a Master’s, I was only 23, and it was Boston University. It was a real course at a real university. People went to bat for me. They said, ‘Look, she knows her stuff.’”

She started her teaching career as a lecturer at Boston University for that semester and the summer course.

In the fall, she taught math and physics at a private school outside Boston that was implementing the Physics First program.

She said, “It felt right. It felt like I was home. I really enjoyed the high school age. They were old enough to start being responsible but still interested in listening to an adult who cared about how they were learning and how they were doing. I really enjoyed being sort of another trusted adult in some of these kids’ lives, and I also really loved getting to teach them early enough . . . when they didn’t hate physics yet.”

After teaching outside Boston, she taught for three years in Tucson. Then her family lived in Berlin for three years where she taught English. She has been out of the classroom for 10 years to be a stay-at-home mom for her two boys.

Conceptual Physics at the Freshman Academy

Renner will be teaching Conceptual Physics at the Freshmen Academy, which uses the Physics First program that she used in her first high school teaching job. What is Physics First?

With the Physic First curriculum, students take physics in 9th grade. Parents are sometimes surprised and concerned to hear that their 9th grader will be taking physics.

Renner said, “Most adults, when they think of high school physics, think of what I taught at the university level. It’s very math heavy. It might not be calculus-based but there’s lots of algebra and trigonometry, and a general understanding of math is required.”

Renner explains that there is no need to worry. “This course is called Conceptual Physics. The idea is that if you can understand physics as the basis of all sciences, and that chemistry builds on top of the physics, and that the biology builds on top of the chemistry. It makes sort of a more logical framework for science learning. It shows kids physics concepts without bogging them down with too much math and hopefully gives them a chance to see why it’s fun and interesting.”

All the 9th graders are required to take it. Renner has about 80 students across four classes.

“My goal is for them to gain some understanding, interest, or appreciation for it,” said Renner. “One of the best compliments I ever got as a teacher was when one of my students said, ‘I really don’t like physics, but now I understand why people do.’”

Renner is willing to talk to anybody who has concerns about the Physics First program. She can be reached at a.renner@laschools.net.

“It feels great to be back in the classroom. I’m really, really happy, and everybody at the high school has been so supportive. All the teachers that have really helped me with this transition.”