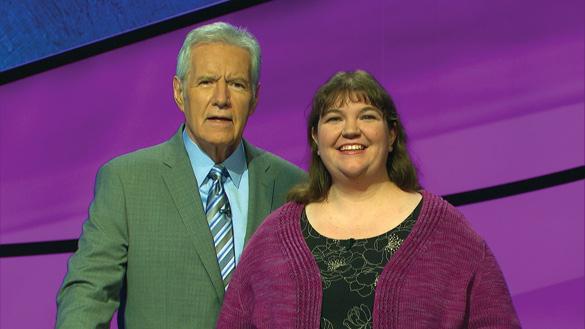 When Los Alamos Jeopardy! fans tuned in Monday, June 10, they got a surprise to find Los Alamos resident Mary Fellman, who manages Close Knit Yarn Co-op on Central Avenue, manning one of the buzzers!

It started when Fellman and her husband Pat Harding took the online test Jeopardy! runs every six months on its website.

“They emailed me in December with the audition dates,” Fellman said. “I auditioned in Los Angeles (contestants pay their own expenses). There was another writen test and a mock Jeopardy! game to make sure you can function in a live setting.”

She got the call in February that she had been chosen to be on the show. Fellman speculates that diversity played a role in her selection.

“More men than women audition, so I had an advantage there, and I was the only New Mexican in my audition group,” she said.
Jeopardy! chooses 10 out of town contestants and two local alternates for two days of taping. Fellman’s episode was taped in March. Five episodes a day are taped on Tuesday and Wednesday, Fellman said.

Fellman was in the Wednesday group, so she got to watch all the episodes being taped, including the one where Emma Boettcher toppled 32-time champion James Holzhauer.

Fellman got to eat lunch with Boettcher, who admired her hand knit sweater.

“She may be the smartest person I ever met,” Fellman said.

Contestants give the producers five interesting facts about themselves.

It turns out Trebek had knitted as a child!

“If any knitter comes to Los Alamos, they not only know about the store, they know when knitting group happens,” Fellman said.

Fellman’s hand knit sweater has garnered a lot of questions about where to get the pattern from Jeopardy!-watching knitters, she said.

Although Fellman didn’t win, being on Jeopardy! was lots of fun, Fellman said.

“I wasn’t as fast on the buzzer as my two opponents,” she said.

How do you prepare to be a Jeopardy! contestant?

Fellman comes from a trivia-loving family, so that helped. She and her husband are fans of the online trivia game Learned League (fans are known as Llamas) and other trivia games.

“Reading a lot helps,” Fellman said. “We watched the tournament of champions episodes. They show you how good players play.”

Fellman had another unique way of practicing for the show.

“I put together a map of the world puzzle a couple of times,” she said. “A lot of places have changed their capitols since I studied geography.”

One last piece of advice from Fellman?