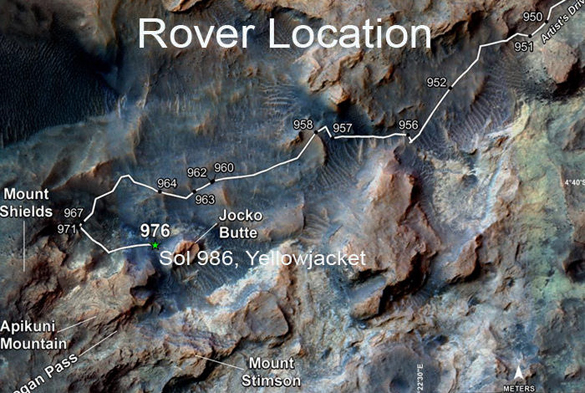 Yellowjacket is the first rock targeted by the NASA Mars Rover’s ChemCam device after checkout of the auto-focus repair. It is a layered sedimentary rock. The laser analysis yielded a composition very close to that of Mars soil and unlike the lakebed sedimentary compositions observed at lower elevations and earlier in the mission. The soil-like composition may indicate that these rocks formed from sediment transported by wind, rather than by water. The ChemCam image also shows millimeter-size spherules of unknown origin, not seen in most earlier sedimentary rocks. Yellowjacket was analyzed on a relatively steep part of the traverse near a site named Logan Pass on Martian day 986 of the Curiosity rover mission. Courtesy/LANL 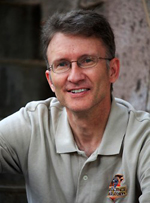 “Last November we discovered that a small laser used to focus the ChemCam telescope on its targets had failed,” said Roger Wiens, instrument lead at Los Alamos. “Without this laser rangefinder, the ChemCam instrument was somewhat blind. The main laser that creates flashes of plasma when it analyzes rocks and soils up to 25 feet from the rover was not affected,” he said, “but the laser analyses only work when the telescope projecting the laser light to the target is in focus.”

The team knows approximate distances to each target, but this information is not accurate enough to provide an in-focus image. So since November the team had limped along by taking nine images, each at a different focus, for every target. The data that was returned contained eight blurry images and one in focus, “a rather poor return for the effort and time, but better than nothing,” Wiens said.

Likewise, the laser analyses were done at nine different focus settings to obtain one good set of data. In the meantime, the team went back to the drawing board. They figured out that if they discarded a lot of the old code on board their distant subject, they could make room for software that could command the instrument to take the nine images on its own and analyze them on-board to find the best focus.

After working on the software in December and January, the team started running tests on a ChemCam clone held captive in the laboratory at Los Alamos. After additional tests in France and on a rover testbed at Jet Propulsion Laboratory, NASA gave the green light last week to install the new software on Mars.

“We think we will actually have better quality images and analyses with this new software than the original,” Wiens said.

The program to run the whole instrument is only 40 kilobytes. The first tests on Mars were completed earlier this week.

Prior to the component failure, the ChemCam team had been looking forward to the installation of rover software to robotically select targets in its images based on parameters such as rock size, shape, and color, as pre-programmed by the scientists. After a delay for the ChemCam repair, the robotic target selection software will likely be uplinked later this summer.

ChemCam has been the chemical scout for the Curiosity rover, providing long-range images and chemical analyses of targets. The device’s discoveries have included:

The Curiosity rover has driven more than 10 kilometers since its landing in August of 2012. It is now ascending the lower portions of 3-mile-high Mount Sharp in Gale crater.