Mars Comes Into Focus At NMMNHS 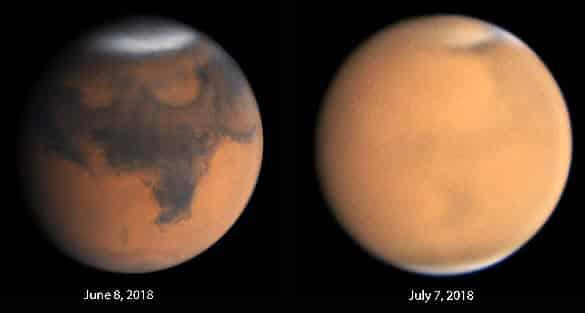 These two images show Mars through a telescope before and after the dust storm. Courtesy/Christophe Pellier
NMMNHS News:
ALBUQUERQUE ― In the coming weeks, the planet Mars will be closer to the Earth than it will be again for decades.
For its First Friday evening event Aug. 3, the New Mexico Museum of Natural History & Science (NMMNHS) will offer information about the Red Planet and a possibility to see it through telescopes. With the extension of Da Vinci — The Genius through Aug. 29, this also will be the final First Friday offering reduced admission prices before the exhibition ends.
Aug. 3, 5:30-9 p.m., admission to Da Vinci — The Genius is discounted by $5, making the final admission charge: Adults $17, Seniors $15 & Children $10. Admission to the museum’s permanent exhibits (excluding Da Vinci — The Genius), is $5 per person, a $3 savings off the usual adult price.
Da Vinci – The Genius demonstrates the full scope of Leonardo da Vinci’s remarkable genius as an inventor, artist, anatomist, sculptor, engineer, musician and architect. Guests will enjoy many unique pieces including life-size machine inventions, entertaining animations of da Vinci’s most notable Renaissance works, and an eye-opening, in-depth analysis of his most famous piece, “Mona Lisa.” Visitors will be able to push, pull, crank, and interact with many of these exhibits for a hands-on understanding of the scientific principles behind them. The exhibition has been extended until Aug. 29.
“The orbits of Earth and Mars are not perfect circles, so the distance between the two planets is not the same when they reach their closest positions,” explains NMMNHS space science director Jim Greenhouse. “At 35,785,000 miles July 30, this is the closest Mars has been since 2003 or will be until 2050, although it will be almost as close a few times before then.”
Astronomers were looking forward to this close separation of the planets as an opportunity to see Mars’ surface in greater detail through telescopes. However, an unprecedented dust storm is currently blocking most of the surface from view, making the planet look like a featureless orange orb. It remains to be seen if the storm will clear in time for the close approach.
In case Mars’ atmosphere does clear, several telescopes will be available in front of the museum. Representatives from the Albuquerque Astronomical Society and Rio Rancho Astronomical Society will offer telescopic views of the Red Planet if the sky is clear. Both clubs will also have table displays inside the museum telling about their programs. Additionally, those who purchase admission to the da Vinci exhibition will be able to look through the observatory telescope.
Because the planets move so slowly relative to each other, the view of Mars between July 30 and Aug. 3 will be the same. The observing part of this event will be canceled if the sky is cloudy.
Even if the planet’s surface can’t be seen through telescopes, several table displays in the museum atrium will offer timely information about Mars August 3 only:
The DynaTheater will be showing America’s Musical Journey. In America’s musical cities, every chord, every riff, every bang of a drum tells a story. These stories come together to create a soundtrack for the American experience — a soundtrack that showcases the nation’s diversity and its collision of cultures, culminating in a unique blend of sound, music and innovation unlike anywhere else in the world. During First Friday, admission to this program is $5 per person.
The show begins at 6:30 p.m. and lasts one hour. The DynaTheater concession stand will be open before the showing and close when the video begins.
The Planetarium will present Fractal Friday at the usual times 6 p.m., 7 p.m., 8 p.m. and 9 p.m. with the normal admission of: Adults $10, Seniors $7 & Children (3-12) $5.
Shows typically sell out in advance, so get your tickets early on the Fractal Foundation’s website: fractalfoundation.org
The Nature Works store will be selling fascinating da Vinci merchandise and other unique gifts 5:30-8 p.m. The Hope Café will be open continuously 9 a.m. to 6 p.m. that day, so you can enjoy dinner while waiting for the museum to reopen (only the café entrance will be open 5-5:30 p.m.).
Crack the da Vinci code and get a special discount! A word based upon a da Vinci invention will unlock a 10 percent discount on a da Vinci audio tour when deliberately said at the tour rental kiosk. The code word for August is “Scafandro.”
Menu
Los Alamos
77°
Fair
6:55am6:58pm MDT
Feels like: 77°F
Wind: 6mph NE
Humidity: 18%
Pressure: 30.26"Hg
UV index: 6
ThuFriSat
79/57°F
82/57°F
81/55°F
Weather forecast Los Alamos, New Mexico ▸
Previous
Next