Marion Loope To Remain In Custody Until Trial 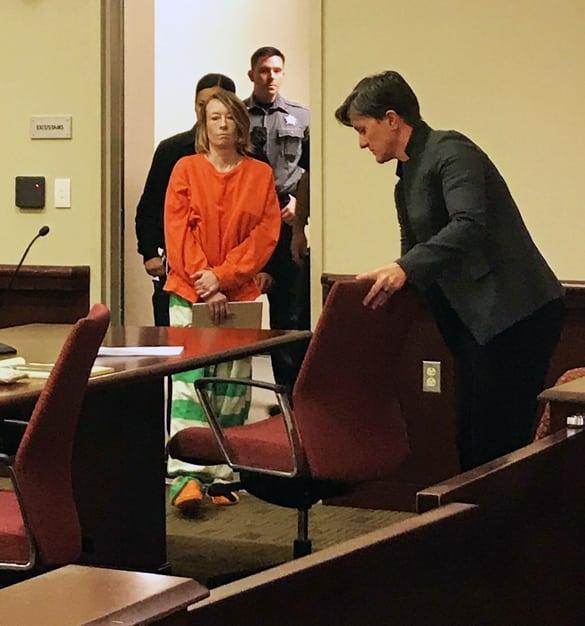 In a dangerousness hearing Wednesday afternoon in First Judicial District Court, Judge T. Glenn Ellington said he found by clear and convincing evidence that based on Loope’s history as well as the current allegations there were no conditions upon which the Court could release her pretrial.

“She poses a threat to the community, particularly first responders and healthcare workers and also to her immediate family members, her mother. Given her history, the violations that she has had previously on conditions of probation, given the current situation that she also has nowhere to live for the Court to be even able to consider putting her on electronic monitoring or some other less restrictive means,” he said, adding that the Court would entertain release in the future to an inpatient bed if that could be secured.

Assistant District Attorney Kalin Cogar, standing in for Deputy District Attorney Kent Wahlquist, said officers from the Los Alamos Police Department were dispatched April 15 to Loope’s residence in reference to a domestic disturbance in which Loope attacked her mother with a knife. She said the officers made contact with the victim at an intersection by the residence where she was trying to get away from Loope.

“The officers noticed that there was a cut on the victim’s hand, which the victim said had happened when she tried to grab the knife and take it away from her throat during the altercation,” Cogar said.

She said Loope was then arrested and though the knife was not found, Loope made a statement to the officers that she has a knife, she has it for self defense and knows how to defend herself.

“The defendant lives with the victim. At this point in time she has nowhere else to live. She has a history of violence against her mother and her now-deceased father and for now this is the only place she claims she’s able to stay,” Cogar said.

She said Loope has an extensive history of violent convictions and listed multiple charges filed since 2009 involving battery, criminal damage to property, disorderly conduct, battery and assault against police officers and medical workers, adding that Loope is facing at least one habitual offense with the current case.

“The state is asking that she be held with no bond due to the fact that she has a very violent nature towards her family and any healthcare worker or police officer that comes to aid her mother. Apparently she takes medicine for that but has stopped and there’s no way to keep her consistent with her medication unless she is being supervised in custody,” Cogar said.

Loope’s attorney Mary Carmack-Altwies said she would not be raising the question of competency at this time. She said she needed to look a little further into Loope’s background and gather some information. She said with regard to Loope’s history she could not see that a lot of the cases were actual convictions, that almost all of them were dismissed or went no further except for the attempted battery on a police officer.

“With regard to her living situation, it’s true that she has nowhere else to go besides with the victim in this case, her mother, and so what I’m proposing or what I’d like to work on is perhaps finding her alternate housing and then I think she could be monitored perhaps by GPS, perhaps by pre-trial services at some point, but I do not think she has anywhere to go at this point,” Carmack-Altwies said.