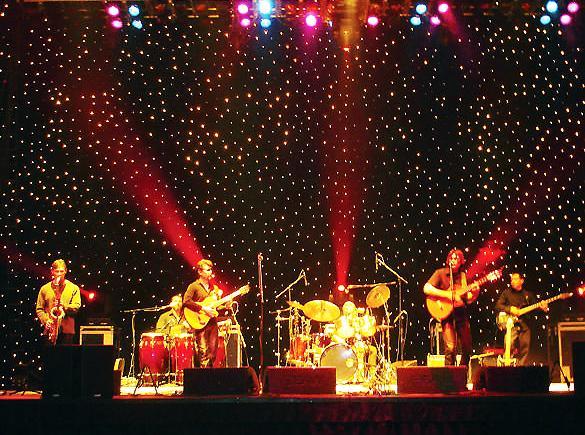 Led by brothers David and Michael Manzanares and accompanied by some of the best musicians in the industry, Manzanares has been labeled one of the hottest Latin acts to hit the music scene gaining both national and international attention. Manzanares performs Friday at the Ashley Pond Park Pavilion. Courtesy photo

Manzanares has been labeled one of the hottest Latin acts to hit the musical scene. They will be performing live for the fifth concert in the Los Alamos Summer Concert Series Friday, June 21 at Ashley Pond Park.

The Concert is sponsored by Enterprise Bank & Trust. Manzanares is hot Spanish guitar, sizzling Latin percussion, and soulful vocals combined to create their own high-energy and fiery sound that has been labeled Nuevo Latino. The group is led by brothers, David and Michael Manzanares and features the virtuosic rhythms of their Latin/Worldbeat band.

Born with a passion for music, they grew up the youngest two of six children on a century-old Spanish ranch in Abiquiu. Steeped in strong family traditions, they were raised with a deep respect for their culture, their land and their family. Their Nuevo Latino style delivers an aggressive approach to the very danceable Rumba Flamenca style mixed with exotic, progressive blends of Latin and Afro-Cuban rhythms. Manzanares has been likened to a combination of the styles of the Gipsy Kings, Santana, Los Lobos and Ottmar Leibert with a touch of New Mexico 505!

This Friday’s opening act features The Max Pack. The Max Pack is led by Max Manzanares, the actor and entertainer son of Andie and David Manzanares, on summer break from Stanford University and making time to perform where it all began in New Mexico. The Max Pack performs Jazz classics from the Great American Songbook, as well as original songs and covers of favorite artists Frank Sinatra, Michael Bublé and Tony Bennett. The concert’s Youth Musical Performance will feature the Los Alamos Jazz Project.

“We are honored to have such a talented New Mexican family perform in the 2019 Los Alamos Summer Concert Series. To have multiple generations of Manzanares musicians on the same night is something special that Sancre Productions and Enterprise Bank & Trust were overjoyed to make happen” says Sancre Productions spokeswoman Monica Griego. As its fifth concert in the Series, the Sancre Productions team is working in tandem with various Los Alamos County Departments to ensure public safety, ADA accommodations, free parking and shuttle services and a diverse offering of Food Truck Vendors.

As usual, the Youth Performance starts at 6 p.m., the Max Pack will perform at 6:30 p.m. and Manzanares will perform at 8 p.m. Friday in the pavilion. The New Mexico Craft Distillery Garden will offer craft cocktails and beer from Rolling Still Distillery Bros., Bathtub Row Brewing Co-Op., and Santa Fe Brewing Company.

To learn more about The Max Pack, visit: www.TheMaxPack.com.

To participate in Nonprofit Row at this Friday’s concert, email Nonprofits@SecretCitySummerConcerts.com.