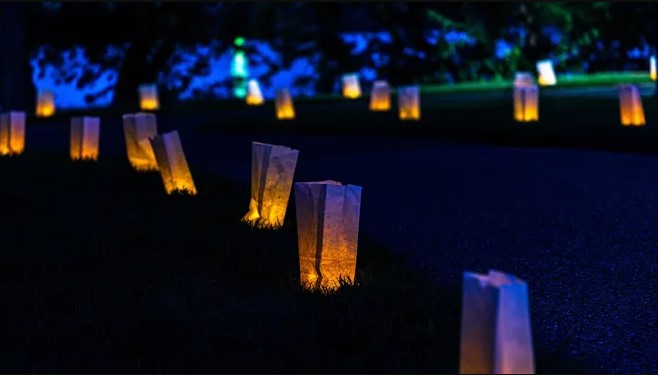 Luminarias will be lit in remembrance and acknowledgement of the atomic bombings of Japan in August of 1945. This year, luminarias will feature messages of peace written by the public ahead of the August events. Courtesy/Manhattan Project National Historical Park/NPS

DENVER — Manhattan Project National Historical Park will partner with Pearl Harbor National Memorial to mark the 77th anniversary of the atomic bombings of Japan, which occurred in August 1945 in the waning days of World War II.

The commemoration will include luminaria ceremonies hosted at each of the Manhattan Project National Historical Park locations and Pearl Harbor National Memorial. Following is a schedule of events.

Aug. 6, 1945, the US Army Air Force dropped the uranium-fueled Little Boy atomic bomb over Hiroshima in the first of only two nuclear bombings of a population in history. The Manhattan Project facility at Oak Ridge produced the uranium used in the Little Boy bomb.

The Park will host a sunrise (6:47 a.m. EDT) Aug. 6 ceremony to commemorate the 77th anniversary of the atomic bombing of Hiroshima, Japan. The event will take place at the International Friendship Bell in Bissell Park and will feature music from an Oak Ridge Civic Music Association quartet. The ceremony will allow for somber, quiet reflection and members of the public are invited to ring the bell for any reason that speaks to them. One hour before dawn park rangers will light luminarias that have been decorated with messages of peace by community members. The luminarias will remain lit throughout the event.

Aug. 6 and Aug. 7, visitors can participate in the event by recording messages of inspiration and peace on paper bags that will be used for the luminaria event. The commemoration will culminate in an event beginning at 6:30 p.m. (HST) Aug. 7. Visitors will be able to help place luminaries along the shoreline of Pearl Harbor and engage with National Park Service staff who will share stories of the peace and reconciliation that grew out of the harrowing reality of World War II. Visitors are welcome to come early and record their own messages of peace, reconciliation, and hope leading up to the evening program, which will end at 7:30 p.m. (HST). For additional questions about this program, please email PERL_Info@nps.gov.

7:30-8:30 p.m. (MDT) Aug. 8, the park will host a Lights for Peace ceremony at Ashley Pond Park where luminarias with public messages of peace and reflection will be lit along a path. The event is designed to be a quiet, introspective experience, focused on giving visitors the opportunity to walk the lighted path in silence and have their own reflective experience based on their personal reasons for participating.

Please note this event is weather dependent due to the chance of thunderstorms in Los Alamos Aug. 8 and visitors are advised to check the park’s Facebook page on the day of the event.

Aug. 9, 1945, the US Army Air Force dropped the plutonium-fueled Fat Man atomic bomb over Nagasaki in the second and so far, the last, nuclear bombing of a population. The Manhattan Project facility at Hanford produced the plutonium used in the Fat Man bomb.

8 p.m. (PDT) Aug. 9, the park will host Lights for Peace to commemorate the 77th anniversary of the atomic bombing of Nagasaki. The event will take place at the Fingernail Stage in Howard Amon Park in Richland, Washington, and will feature music from the Mid-Columbia Mastersingers. Visitors will have an opportunity to walk a path lit with luminarias for a quiet, contemplative experience based on their own personal reasons for participating.

The public can also follow these events on the park’s social media channels:

Formally established in November 2015 via a Memorandum of Agreement between the Department of Energy and the National Park Service to preserve portions of three World War II sites (Oak Ridge, Tennessee; Los Alamos, New Mexico; and Hanford, Washington) where the United States developed the first atomic weapons, the park marks the history of the people, science, events, and controversy associated with the creation of the atomic bomb in the top-secret effort known as the Manhattan Project. Under the agreement, the National Park Service and the Department of Energy jointly manage and administer the park.

About the National Park Service:

More than 20,000 National Park Service employees care for America’s 419 national parks and work with communities across the nation to help preserve local history and create close-to-home recreational opportunities. Learn more at www.nps.gov and on Facebook, Instagram, Twitter, and YouTube.