Mambo to Los Pinguos Friday at the Pond 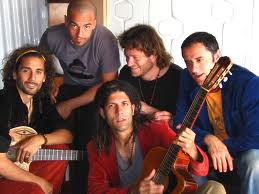 The band is from Buenos Aires, Argentina and they play a mix of Latin rhythms, reggae, rumba, tango, flamenco and rock. The music is very energetic, fun, sexy, fiery and passionate. All right! It’s the third Friday night party of the Series!

I looked up Los Pinguos in the Spanish-English dictionary. Nada. On the computer, I only found an outstanding band from Buenos Aires. The Spanish word for “penguins” is “pinguinos”. I looked up los pinguinos de Patagonia and there are a lot of really cool pictures. One of Los Pinguos’ favorite bands and early influences were the Beatles so …  it’s a good name!

Los Pinguos formed in 1999 in Buenos Aires and became very popular. In 2001 they moved to Los Angeles looking to find international success. They’ve played all the major clubs and world music festivals in the LA area plus all over the U.S. and the world.

They’ve played the Third Street Promenade in Santa Monica many times. It’s the same street festival where the Red Elvises first caught on in Los Angeles.

They played the new Ed McMahon TV show called the “Next Big Star” and won their Grand Prize. The Red Elvises won the grand prize on McMahon’s “Star Search”, an earlier TV series. The Red Elvises recommend that we all catch the show. They are one of the Red Elvises favorite bands and have asked us to say “hello.”

Last week we belly danced. This week it’s mambo time. The show will be a fabulous evening of dance, great entertainment and joy.

You can read about and listen to Los Pinguos at http://www.lospinguos.com/, www.myspace.com/lospinguos, and at YouTube. You can get more info on the Concert Series at http://www.gordonssummerconcerts.com/.

On June 6 and 7 there’s the LA ChamberFest and the Summer Concert Series presents the music. On Friday night we present the Warren Hood Band from Austin, Texas. Hood is one of the best fiddlers in the world.

His music is Americana, roots-rock, Texas country, bluegrass and blues. He is the most wanted of today’s great Texas fiddlers. There’s a lot of great stuff at http://www.warrenhood.com/ and on YouTube and MySpace. Friday night will be CB FOX, Dixie Girl, and LA Chamber of Commerce Night. They are three very generous and long-time sponsors of the Series.

At 11 a.m. Saturday, June 6, ChamberFest presents Eddy & the Nomads playing classic rock of the 50s and 60s. There’ll be lots of booths, games, a car show and more.

Thank you to the Los Alamos business members of the Chamber of Commerce and to LA MainStreet. The Friday night and Saturday morning concerts will be downtown at the corner of Central and Main.