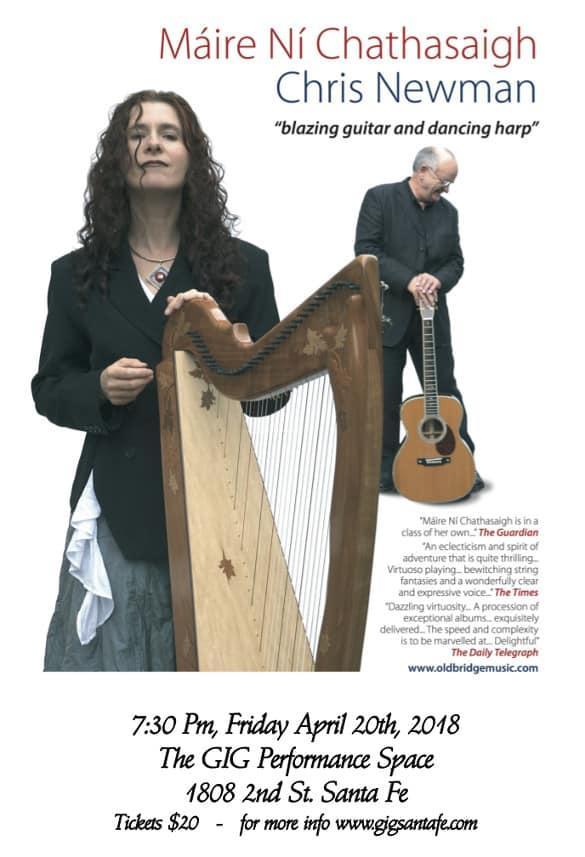 MUSIC News:
Chris Newman and Máire Ní Chathasaigh will be presented in concert at 7:30 p.m. Friday, April 20 at GIG Performance Space in Santa Fe. Admission tickets are $20, and available at the door the evening of show, Go to www.gigsantafe.com for more information.
The celebrated partnership of Chris Newman, “one of the UK’s most staggering and influential acoustic guitarists” (fROOTS), with Máire Ní Chathasaigh, “the doyenne of Irish harpers” (Scotland on Sunday), is a breathtaking blend of traditional Irish music, hot jazz, bluegrass and baroque, spiced with striking new compositions and what The West Australian calls “Chris’s delightfully subversive wit.”
They have presented their unique musical vision in 22 countries on five continents to venues ranging from the tiniest of village halls to palaces in Kyoto and Istanbul, the Barbican in London, Sydney Town Hall and the Philharmonie in Cologne. Now they are making a three city tour of New Mexico, with performances in Albuquerque April 14, Santa Fe April 20 and Taos April 21.
Máire Ní Chathasaigh is one of Ireland’s most important and influential traditional musicians. She began to play the harp at the age of eleven. A West Cork background steeped in the oral tradition led her, while still a teenager, to develop new techniques that made it possible for the first time to play traditional music on the harp in a stylistically accurate way. She won the All-Ireland and the Pan-Celtic Harp Competition several times and in 1985 recorded the first harp album to concentrate on traditional Irish dance music. She was awarded Live Ireland’s 2016 Female Musician of the Year and in 2001 received Irish music’s most prestigious award, the Gradam Ceoil TG4 Traditional Musician of the Year “for the excellence and pioneering force of her music…and the positive influence she has had on the young generation of harpers.”
Chris Newman has been called a “brilliant English master of the acoustic guitar” (The Daily Telegraph) and a “dazzling player” (Acoustic Guitar), whose work is “nothing short of brilliant” (Dirty Linen). He began to play guitar at the age of four. A prolific composer, arranger and record producer, he’s played with luminaries of many musical worlds, such as the French jazz violinist Stéphane Grappelli, and received a sliver disc for producing Fred Wedlock’s international hit “The Oldest Swinger in Town,” for which Newman also composed the tune and which reached number two on the charts in the UK. He was named Live Ireland’s Male Musician of the Year in 2009.
“This celebrated harp/guitar duo took the place by storm. Stately Carolan tunes, jazzy Django-ish numbers, dazzling Doc Watson style flat-picking fliers, driving Irish dance tunes—this pair can nonchalantly do the lot. Guitar players applauded and went sadly home to burn their instruments!”—The Belfast Telegraph
“This harp player has reinvented the traditional harp. She and her S/O, Chris Newman, are indescribable, as his guitar virtuosity joins her musical genius. How often to you get to hear someone reinvent an instrument, like Miles Davis on trumpet, Ray Charles on piano, along with Jelly Roll Morton, Fats Waller or Django Reinhardt on guitar. Jerry Mulligan on sax and Máire Ní Chathasaigh on harp. Really. Truly. Good Lord, this woman is a wonder!!”—Bill Margeson, The Chicago Irish American News
For more information about this duo, visit www.maireandchris.com.
Menu
LOS ALAMOS