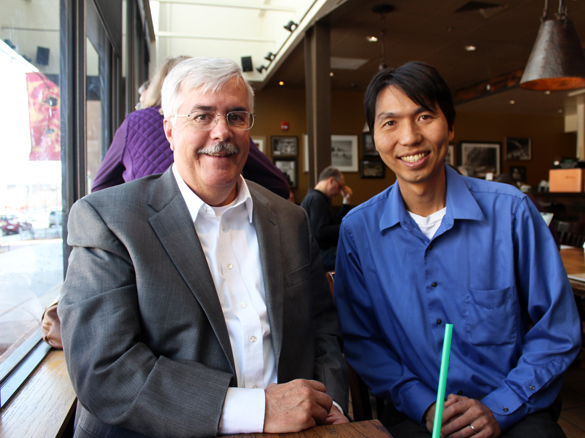 In 2011, Marshall Neel and his partner Anthony Edwards were looking for a way to help businesses grow without relying on help from the government. After deciding to build a funding portal, like Kickstarter, they attended a crowdfunding conference in Los Angeles to learn everything about what worked and what didn’t work when raising money by asking for small donations from a lot of people.

Two takeaways they gathered at that crowdfunding conference were that there was “wisdom in the crowd”, and people invest in who they know and what they know. With those two things in mind, it was clear that they didn’t want to build another Kickstarter or Indiegogo. With www.mainstreetcrowd.com, they wanted to create something more, and provide a richer experience.

What does Main Street Crowd do?

“We wanted to do economic development at the community level,” Neel said. “Crowdfunding wasn’t doing that. You end up following the crowd. We decided to engineer something where communities can have everything they need. You can invest, raise capital, advertise, and find loans and corporate sponsors. We realized that if we’re a trusted local organization, it changes the dynamic, and makes it possible to do things locally that you can’t do on kickstarter.”

Any chamber of commerce or non-profit can create a clowd for free on Main Street Crowd. The term “clowd” means the crowd in the cloud (cloud-computing).

“We’re signing a contract with InvestNextDoor and will be bringing in their investment offerings to clowdz in the very near future, hopefully in a couple weeks,” Neel said. “So in a clowd, you’ll have projects, but you’ll also see crowd lending offerings where people can invest in businesses at attractive rates of return.”

The Main Street Crowd website is organized into geographic “clowdz”. The Los Alamos Chamber of Commerce has a clowd, at https://los-alamos-chamber.mainstreetcrowd.com. There you can find crowdfunding projects and resources specific to the Los Alamos area.

Why do people give to crowdfunding campaigns?

“People give for a lot of reasons,” Neel said. “The reasons are as varied as the project. People like to tell story of how they helped. Sometimes they get something in return, like a prize or a membership, but it’s important to give people compelling reason other than reward. They want to be a part of the project.”

“I’m always surprised at who’s willing to do what for who and why,” Neel said. “Giving makes people feel good.”

Neel donated to the Legacy Now Lived project because he felt a personal connection to LeAnne Parsons, who is trying to create a video to raise awareness about adoption. He said, “LeAnne’s project touched me personally, because I adopted my son.”

Los Alamos benefits from having a collaborative place, so people in town can push traffic to one website. “Locally, you have a better chance,” Neel said, “because people in town care about you.”