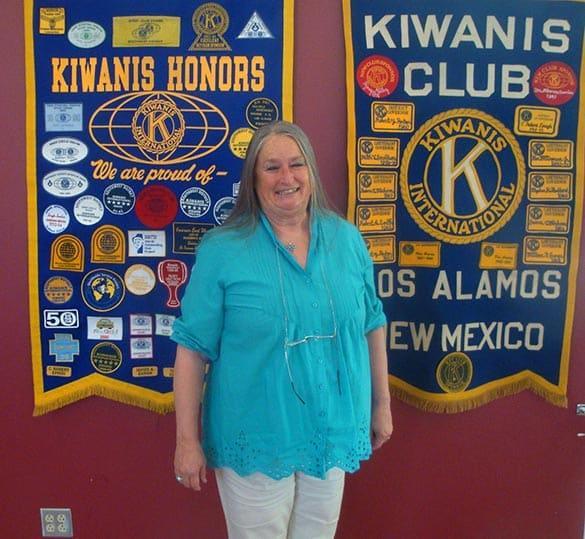 Magistrate Judge Pat A. Casados, a Democrat seeking re-election, was the only speaker at the final of the Los Alamos Kiwanis Club’s Primary Election forums. Courtesy/Kiwanis

Kiwanis invited three candidates to come to the club’s last Primary Election Forum, but Stephanie Garcia Richard, a White Rock Democrat running for commissioner of public lands, and James E. Rickman, a Libertarian running for magistrate judge, were unable to participate. Rickman, however, sent a written statement to be read at the meeting.

There is no Republican candidate for magistrate judge—but the Democratic incumbent attended.

Magistrate Judge Pat A. Casados, a Democrat seeking re-election, was the only speaker at the final of the Los Alamos Kiwanis Club’s Primary Election forums.

Casados—who is unopposed in Democratic Primary—has a long history in New Mexico. She told Kiwanis  that  she was born in Tucumcari and raised on a ranch outside San Jon. Her husband’s job brought her to Los Alamos. She and her husband, Jeff Casados, have now raised a family here, and she has  now been a magistrate judge for 16 years.

“I love the job,”  she said. “It’s rewarding and  it is frustrating—at the same time.”

She is certified in special jurisdiction trial skills by the National Judicial College in Reno, Nevada, where she has taken more than 80 hours of classes. “Judges from all over the United States” take classes there, she said.

The college ranks New Mexico high in driving-while-intoxicated (DWI) sentencing, she commented, because the state requires an interlock on the car of every person convicted of DWI.

She also takes the 15 credits of continuing education required every year by the Judicial Education Center associated with the University of New Mexico Law School, she said. She “often takes more.”

And she has heard cases elsewhere in the state, notably in Roswell. She may soon be traveling to Southern New Mexico to hear cases there because of the recent death of a judge in Alamogordo. She said the Administrator of the Courts and the New Mexico Supreme Court require that she travel because she has a small case load in Los Alamos.

“I’ve taught at the New Judge School given every four years after the election,” she said, explaining that it puts together the training for all judges in the state.

She has also served as president of the Magistrate Judges Association, which includes 67 registered judges in New Mexico.

She said, “I lobby at the Legislature for things that affect magistrates and the judicial system.”

She has been appointed by the New Mexico Supreme Court to serve on the Chief Judges Council and the Statewide Budget Council.

If she is re-elected, she said, she will be watching to see what the new governor will do for the judiciary. She would like to see some more services for the homeless in New Mexico—and especially in Los Alamos.

Her office is in the new court building in Los Alamos, and she said that she helped to make sure a district court clerk was here and that a district judge was here on a regular basis.

She is enthusiastic about the new building and offered to provide a tour to interested people.

James E. Rickman, who is unopposed in the Libertarian Primary, has lived in Los Alamos “for more than 40 years.”

His statement (in which he referred to himself in the third person) said, “He is in the process of retiring from Los Alamos National Laboratory after 24 years of service.”

He “believes that by serving as magistrate judge, he can help preserve the outstanding quality of life he has enjoyed in Los Alamos because courts can play a vital role in ensuring the continuing safety and livability of our community.”

He summarized his qualifications as follows:

“Although the magistrate judge position does not require a law degree or any other specific educational requirements, James believes he possesses an excellent mix of academic and work experience that will allow him to serve honorably and effectively as judge. His bachelor’s degree in philosophy from New Mexico State University provided him with a classic education that focused on philosophical disciplines such as logic, ethics, and the nature of reality; social sciences, including psychology and anthropology; and a working knowledge of chemistry and physics. After college, James Rickman worked extensively as a journalist, photographer, and science writer and public relations expert at the laboratory.

“This combined education and experience has made James adept at being able to understand and deal with complex topics across the spectrum of human experience, listen to and connect with people from extremely diverse walks of life, and to sift through the noise and complexity of everyday events to arrive at the underlying truths.

“Moreover, James and his partner of nearly 20 years have served as landlords as well as tenants in New Mexico, which provides him with valuable perspectives from both sides of landlord-tenant disputes. He also had the opportunity while in college to help tutor inmates at the Southern New Mexico Correctional Facility, which provided him with some insight into the mindset of the incarcerated.”

As a Libertarian, he said, he “believes that constitutional rights are sacrosanct.” He said crime victims should participate  in the judicial process and ”be made whole to the extent possible after a crime.” He added, “As a student of ethics and human nature, James Rickman believes that judges should be of the highest integrity, and that courts should provide all participants with the greatest amount of decency, dignity and respect.”

“When James says, ‘liberty and justice for all,’ you can have no doubt that he means it,” he concluded.

He said he was sad that he couldn’t attend the forum in person, and he added that if people would like to speak to him in person, they may call him to arrange an opportunity to do so.