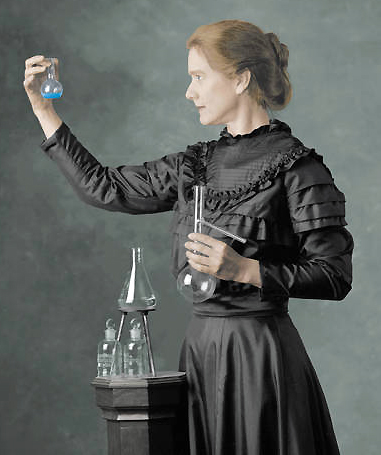 In a series of performances from Sep. 11 through 14, storyteller Susan Marie Frontczak will portray perhaps the most famous of women scientists, Madame Marie Curie (née Maria Skłodowska.)

Madame Curie changed the world in which we live through her discovery of radium and radioactivity. Through collaboration with the medical community, she and her husband Pierre discovered and established the first successful radiation treatments of cancer.

Simply through her own passion and perseverance, Marie Curie opened the doors of science to women worldwide. The morning of Sept. 11, Susan Frontczak will visit Pojoaque High School science classes, telling Marie Curie’s story and encouraging students in science and math.

The same evening at 7:30 p.m., she will present a “Conversation with Marie Curie” at Fuller Lodge, sponsored by the Los Alamos Historical Society.

Wednesday, Sept. 12, Frontczak will lead a workshop about how to develop a presentation of a living history. Her repertoire includes not only Marie Curie but also Eleanor Roosevelt, Mary Shelley and Irene Castle.

In addition, she has programs for grade school students in math and science. She will give participants guidance on how to make a historical character come to life. Her workshops are filled with encouragement, exploration, and laughter.

The workshop is 9:30 a.m. to 2:30 p.m. at the Bradbury Science Museum. Sign up at www.PajaritoEEC.org. Space is limited.

As part of the community weekend celebration of “The Next Big Idea,” Frontczak will present a one-woman performance of Madame Curie at the Los Alamos Little Theater titled Manya, September 14.

The one-hour performance will begin at 4 p.m. for middle school and high school students who participate in STEM Student Day and have previously registered at www.nextbigideala.com/STEMday.

Class size is limited to the first 100 registrants. This performance is not open to the public.

Audiences will witness the origins of scientific discoveries we now take for granted. They will re-live the remarkable collaboration between husband and wife, Pierre and Marie, companion scientists.

The program also honors the wife and mother, who felt more daunted by the chemistry of the kitchen than of the laboratory. After the tragic death of her husband, Pierre, Marie became a single mother raising her two daughters from ages 16 months and 8 years. And the presentation honors her Polish heritage.

Frontczak brings to light many of Curie’s lesser-known contributions, both social and scientific — and the obstacles she faced along the way.

Within her lifetime Madame Curie saw the curative effects of radiation on cancer. Late in life she came to admit the dangers of working with radioactive materials.

She died before the new understanding of the atom — initiated by her discoveries — produced the atomic bomb. Whether looking at Curie within her historical context or through the lens of a new millennium, this is a life that challenges our assumptions about what one person can achieve.

Frontczak has traveled throughout the United States and Europe portraying Madame Curie. In dramatizing the life of Maria Skłodowska, Susan Marie Frontczak pays homage to their shared Polish heritage.

Marie Curie’s perseverance in purifying a grain of radium from a ton of pitchblende was part of the inspiration for Frontczak to major in engineering, where she worked for 14 years before pursuing full-time writing and acting.

She has always viewed both science and art as valid outlets for creativity. She believes that Marie Curie’s inner complexity is not recognized, but deserves to be. It is her aim to reveal the human behind the scientist, while placing Marie Curie’s life and accomplishments in a memorable historical context.

Frontczak’s portrayal of Marie Curie has been written up in Chemical and Engineering News and has been given rave reviews by other national laboratories, including Lawrence Livermore and Fermi National Accelerator Laboratory.

Mark Grayson of Northwestern University said of her performance: “Ms. Frontczak’s narrative style allows her to relive moments of Marie Curie’s life very vividly without being trite or theatrical. She builds the suspense of the story about Madame Curie’s life, with all its remarkable quirks as well as tragedies. It is one of the more remarkable pieces of theater I have seen. Frontczak’s presentation of Marie Curie is stunning.”