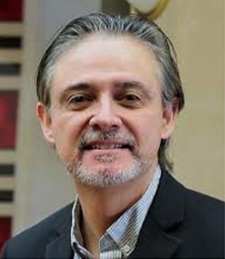 The speaker is State Historian Rob Martínez who is a native New Mexican born and raised in Albuquerque. A graduate of the University of New Mexico with a B.B.A. in International Business Management, he went on to pursue his interest in New Mexican culture and history at U.N.M.

Martínez earned an M.A. in Latin American history, with an emphasis on church, cultural and social practices of the Spanish Colonial period in New Mexico. He worked for 14 years as a research historian for the Sephardic Legacy Project, scouring civil and church archives analyzing documents for a research and publishing project about the Crypto-Jewish phenomenon in New Mexico and the Caribbean.

Martínez has performed musically in all parts of New Mexico, and on multiple occasions has presented music and New Mexican culture at the Smithsonian Folk Life Festival in Washington, D.C., the NEA’s National Heritage Fellowship Awards, and also the Kennedy Center for the Performing Arts.​ He will be describing his job as State Historian and discussing Nuestras Madrecitas: Women in Our History.

After registering, a confirmation email will be sent containing information about joining the meeting.