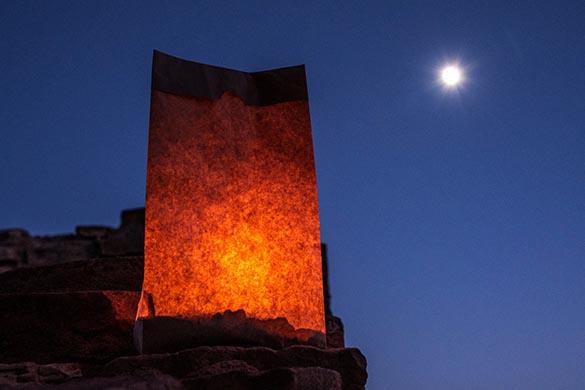 MOUNTAINAIR – The community is invited to a special night at Luminaria de Abo in the Salinas Pueblo Missions National Monument.

Against clear New Mexico skies, the luminaria event at Abo has to be experienced to be fully appreciated. Attendees are encouraged to bring a warm coat, some blankets and plan an outing to experience the magic at Abo, just nine miles west of Mountainair.

Friends of Salinas Pueblo Missions and Western National Parks Association are sponsoring this free event that is open to the public. Donations and membership applications to the Friends of Salinas are always welcome.

Luminaria de Abo begins with a Roman Catholic Mass 4-5 p.m. in the Abo ruins. The Mass will be celebrated by Father Malachy Obiejesi of St. Alice Catholic Church in Mountainair. A Posada reenactment follows the Mass.

The Mass and Posada are followed 5:30-8 p.m. by the luminaria even, which includes live music, Posada Piñatas for the kids and refreshments including tamales, biscochitos, coffee, cocoa, tea and cider.

More information about the event is available by calling the park headquarters at 505.847.2585.

The Abo Unit of Salinas Pueblo Missions National Monument sits west of the town of Mountainair and contains approximately 370 acres. The number and size of unexcavated pueblo mounds suggest that when the Spanish arrived in 1581 they would have found a thriving community. In 1622 Fray Francisco Fonte was assigned to the Abo Mission. Working with the Puebloan, Fonte established the use of rooms in one of the pueblos for an early convento. An early smaller Abo Church and Convento were built starting in 1623. Similar to Quarai, the convento for this church curiously contained a Circular Kiva. This Puebloan religious structure probably aided in early conversions. Construction on this earlier church and convento was completed by 1628. In 1629, a second missionary, Fray Francisco Acevedo, was assigned to Abo. In 1640 Acevedo began to renovate the Abo church and convento. This renovation increased the size of the church and included many improvements. This new, larger church was built around the smaller church, allowing services to continue until the smaller church needed to be dismantled and removed. Renovations to the church and convento were complete by 1658. Like Gran Quivira, a combination of disease, drought, famine, and Apache raiding led to the abandonment of Abo in 1673.

For more than 100 years Abo was quiet. In 1815 Spanish sheep herders attempted to return to the area, but were pushed out by Apaches in 1830. Settlers would permanently return in 1865. The remains of these Reoccupation Structures can be seen today south and east of the Abo Mission. https://www.nps.gov/sapu/learn/historyculture/abo.htm 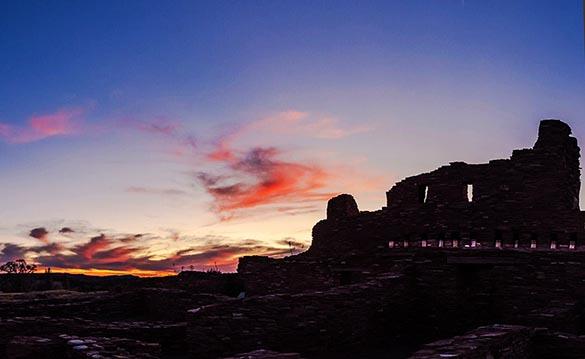