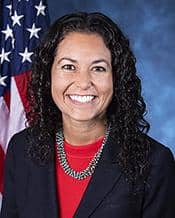 U.S. Rep. Xochitl Torres Small
This week, President Trump threatened to veto the National Defense Authorization Act – legislation that responsibly funds the nation’s defense systems – over the inclusion of language requiring the Air Force to replace or clean water found to be contaminated with PFAS.
In 2018, the U.S. Air Force confirmed that firefighting foam containing PFAS chemicals used around Cannon Air Force Base and Holloman Air Force Base in New Mexico contaminated nearby groundwater. The contamination has affected several agricultural wells near Cannon Air Force Base that feed New Mexican dairies, causing major disruptions for the local dairy industry. The extent of impacts near Holloman is still being determined.
PFAS contaminants have been linked to cancer and developmental issues in kids.
“We can protect both the nation’s security and the economic well-being of dairy farmers in New Mexico. That is exactly what the House bill does. The Department of Defense contaminated the groundwater around Cannon Air Force Base with PFAS chemicals. They need to clean it up. It is as simple as that. The President’s veto threat is incomprehensible and a slap in the face of our nation’s farming community,” Luján said.
“Our national defense is more important than party lines. But this year, the Administration is setting up a false choice. We don’t need to undermine the economic livelihood of farmers to support our military. We can ensure that the Department of Defense compensates farmers for contaminating their water supply while providing for the needs of the military without delay. Our national defense is too important to turn into a partisan issue,” Torres Small said.
“As District Four Curry County Commissioner, the issue of cleanup of the contaminants in our water aquifer is not of question of if it should happen, but how soon can it get started. The aquifer is the lifeblood of Curry County, both for agriculture and sustainable living. As this environmental disaster continues to spread, it changes the economics of the area as well. Prime farmland and high production diaries are now facing diminished property values, and markets that are unwilling to buy the commodities produced under the use of contaminated water. This in returns, forces producers to cut costs, and lay off workers. With no cleanup in place or even planned out, the area and people affected continues to grow. Subdivisions in the area sit unsure about their future, and they too are dependent on the aquifer for drinking water. Filters in homes are not a permanent fix to this issue. Slapping a bandage on a gushing wound just temporary slows down the inevitable demise to come,” Curry County Commissioner Seth Martin said. “There is only one question at hand, when will the DoD step in and clean up their environmental disaster that is spreading and devastating economics and livability in Curry County.”
“My community has been supportive of the Air Force’s presence in Eastern New Mexico for generations, and this action by the Administration stands in the way of the Air Force having the tools it needs to clean up the PFAS pollution on my dairy and in the country. Real families and businesses are seriously impacted, and so far, the Air Force and the Administration has been content to watch us lose income and shed good jobs. I’ve lost a multimillion-dollar dairy business through no fault of my own. The manufacturers of these chemicals are also to blame, but the Air Force disregarded the dangers PFAS would have and still continued to use them,” Highland Dairy farmer Art Schaap said. “Congressman Luján and the entire New Mexico delegation has been thoughtful and responsive. The White House should realize that this is not a partisan issue at all. It’s about American strength and resolve to right wrongs committed in the past and prevent them from continuing on the future.”
“Our family dairy farm has been working with our delegation to find a long-term solution giving the Air Force the authority they need to fix the PFAS contamination threat in Curry County. This threat is clouding the future of both our and our neighboring family’s future and way of life. It is unfortunate that the White House cannot appreciate the efforts by Congressman Luján and the rest of the New Mexico delegation to solve this problem,” Rajen Dairy farmer Randy Vander Dussen said.
Menu
Los Alamos
91°
Sunny
5:48am8:23pm MDT
Feels like: 91°F
Wind: 8mph ENE
Humidity: 6%
Pressure: 29.77"Hg
UV index: 7
TueWedThu
90/64°F
91/64°F
88/64°F
Weather forecast Los Alamos, New Mexico ▸