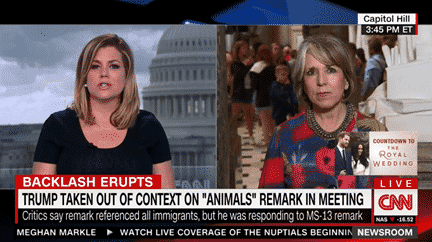 From the Office of U.S. Rep. Michelle Lujan Grisham:

Below are excerpts from the interview and a link to the video:

Click here to watch a video of her remarks.

On the bipartisan discharge petition:

“These are real processes. We’re serious about getting a vote and a debate, and we’re serious about winning this issue. I mean 80 percent of the American people want us to win on a permanent solution for DACA and to support and protect Dreamers and that’s exactly what we’re going to do.”

“I appreciate that you are making sure that the context of the President’s remarks are included in this conversation and debate but let’s also put into context what this President’s been doing since the campaign. Right, he’s worked diligently to criminalize every single immigrant and now he’s working diligently to dehumanize immigrants. And while you can’t argue that that was meant to be a statement that was dealing with the most nefarious actors, in fact his own Chief of Staff is now admitting that the vast majority of individuals that come across the border are not in fact nefarious actors or serious offenders or criminals. They’re men and women searching for a better life – asylum, just like the constitution says that they’re able to do. And they’re working to protect their children. And so when you take all of that into consideration, I also find his remarks to be incredibly insensitive, offensive, and they are intended to divide this country and to sow fear in places that it doesn’t need to exist.”

On the President’s Anti-Immigrant Agenda:

“Quite frankly [it] is just to build a wall and to get his based fired up that all immigrants somehow do not fit into the fabric of this country, when it’s the foundation of this country. It’s incredibly offensive.”

On Confidence About Reaching a Permanent Bipartisan Solution:

On Gifts to Speaker Ryan:

“This is because the Speaker made a commitment to me personally that he would spend time with me – we would talk about this issue, we would talk about the strategies and that never happened. And it’s really to raise awareness and attention that the minority [in the Republican conference] and the Speaker himself are preventing a debate on policies and ideas that would protect and find a permanent solution for Dreamers including the bills that they want to do.”

The Congressional Hispanic Caucus (CHC), founded in December 1976, is organized as a Congressional Member organization, governed under the Rules of the U.S. House of Representatives. The CHC is dedicated to voicing and advancing, through the legislative process, issues affecting Hispanics in the United States, Puerto Rico and U.S. Territories.