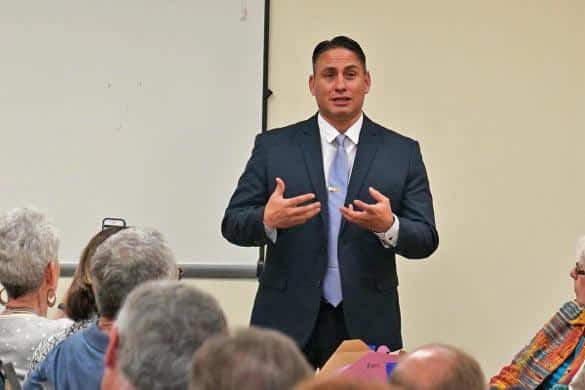 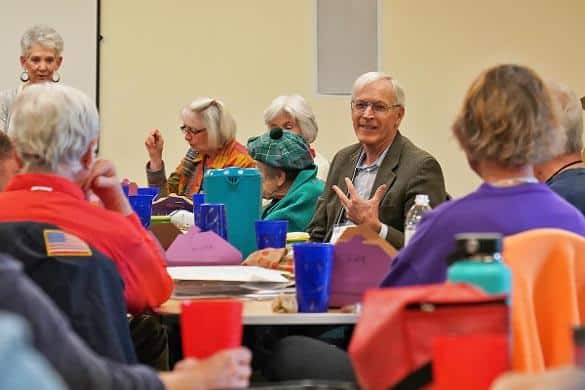 Los Alamos County Councilor Pete Sheehey was on hand to discuss County issues such as energy and infrastructure. Photo by John McHale/ladailypost.com

By REBECCA CHAIKEN
League of Women Voters
The League of Women Voters welcomed Lt. Gov. Howie Morales to its monthly Lunch with a Leader community event Tuesday at Mesa Public Library.
Lt. Gov. Morales is a former Democratic state senator from Silver City and a teacher with a doctorate in education from New Mexico State University. He was elected Lt. Governor in November 2018 with Govr Michelle Lujan Grisham.
In addition to the position of Lt. Governor, he was temporarily appointed to lead the Public Education Department until Dr. Karen Trujillo was appointed.
Lt. Gov. Morales told the large audience gathered for his talk that Gov. Lujan Grisham has made it clear that interagency collaboration is the key to improving the education system in New Mexico. All departments in the government are connected to education in one way or another and by recognizing this, the goal of the Lujan Grisham administration is to change the culture of education across the state.
In addition to signing an executive order eliminating inadequate and ineffective annual standardized testing and significantly changing the current teacher evaluation, Gov. Lujan Grisham increased the budget of the education department substantially, which provided a 6 percent salary increase to all New Mexico teachers and staff. Teacher salary tier starting amounts also have been increased. The balance of the remaining new funds will be used strategically to invest in schools to raise the bar for both teachers and students.
Bringing educators to the table and respecting both their values and creativity will rebuild the Public Education Department, he said. Lt. Gov. Morales has met directly with employees across the school system to share with them the exciting changes the educational system is undertaking and assure them that education in New Mexico is turning a corner.
By using best practices based on evidence, New Mexico will invest in its schools by providing essential services. Gov. Lujan Grisham has already signed groundbreaking legislation streamlining the government by combining all services for early childhood into one new division. Collaboration and cooperation will remain the focus, he said.
Lt. Gov. Morales answered a number of questions posed by members of the audience. He agreed that it is crucial to transform, not just reform, the curriculum to include climate change. Further, we need to lead by example by constructing any new buildings with climate change in mind, he said.
In order to reduce class size, he wants to bring in more licensed professionals, not just lower class size with substitutes teaching on a waiver; but  bring back experienced educators who have left; and urge educators to delay planned retirements.
He explained that New Mexico has a shortage of 740 teachers. With a substantial increase in funding to improve early childhood education, including supporting the First Born program, we can expect to see corresponding improvement in elementary, middle, and high school student achievement, he said. 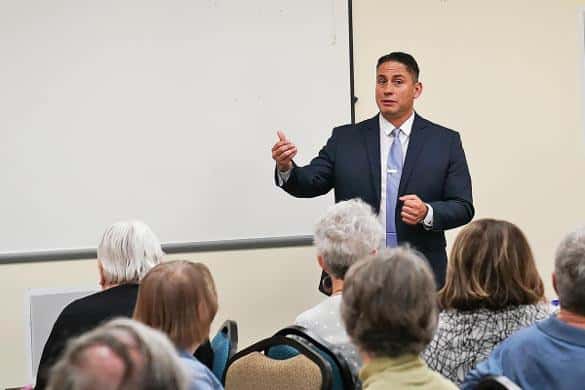