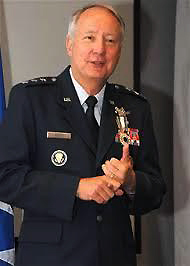 “Lt. Gen. Klotz’s confirmation comes at a critical point for the National Nuclear Security Administration,” Secretary of Energy Ernest Moniz said. “His breadth of military and national security leadership experience makes him uniquely suited to lead the NNSA, fulfilling its commitments to the management and security of the nation’s nuclear weapons, nuclear nonproliferation, naval reactor programs, and nuclear and radiological emergency preparedness efforts. I thank the Senate for their attention to Lieutenant General Klotz’s nomination, and I look forward to working with him. I also thank Acting Administrator Bruce Held for his outstanding leadership of NNSA as acting administrator.”

As Under Secretary for Nuclear Security, Klotz is responsible for the management and operation of the NNSA, as well as policy matters across the Department of Energy and NNSA enterprise in support of President Obama’s nuclear security agenda. Acting Administrator Held will return to his position as Associate Deputy Secretary.

Prior to his Senate confirmation, Klotz served in a variety of military and national security positions. As the former Commander of Air Force Global Strike Command, a position he held from 2009 to 2011, he established and then led a brand new 23,000-person organization that merged responsibility for all U.S. nuclear-capable bombers and land-based missiles under a single chain of command. From 2007 to 2009, Klotz was the Assistant Vice Chief of Staff and Director of the Air Staff.

Klotz served at the White House from 2001 to 2003 as the Director for Nuclear Policy and Arms Control on the National Security Council, where he represented the White House in the talks that led to the 2002 Moscow Treaty to reduce strategic nuclear weapons. Earlier in his career, he served as the defense attaché at U.S. Embassy Moscow during a particularly eventful period in U.S.-Russian relations.

A distinguished graduate of the U.S. Air Force Academy, Klotz attended Oxford University as a Rhodes Scholar, where he earned an MPhil in international relations and a DPhil in politics. He also is a graduate of the National War College in Washington, DC. Most recently, Klotz was a senior fellow for strategic studies and arms control at the Council on Foreign Relations.