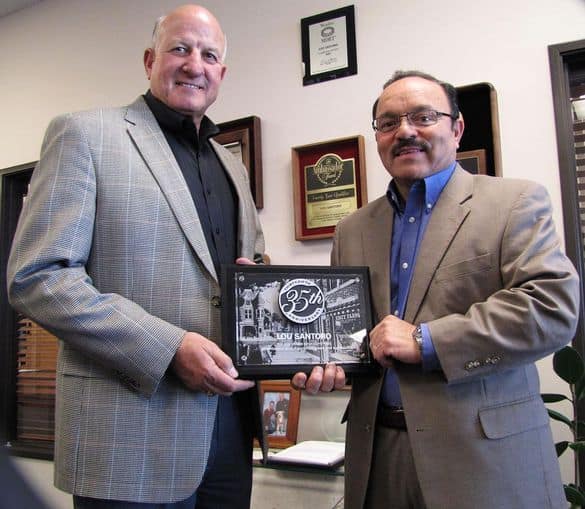 Lou Santoro, left, is honored by Agency Field Executive James Medina on behalf of State Farm for his 35 years of service and leadership. Photo by Carol A. Clark/ladailypost.com

Los Alamos businessman Lou Santoro was honored by State Farm Insurance recently for his years of leadership and service.

Agency Field Executive James Medina traveled to Santoro’s downtown Los Alamos office April 20 to personally thank him and present him with a special plaque for his 35 years of exemplary service with the worldwide organization.

“Lou is a leader within State Farm – he’s an agent but with his management experience, the other agents look up to him,” Medina said. “I’m extremely pleased Lou represents State Farm in Los Alamos. He is involved in his community and gives back a lot.”

Santoro has been with State Farm since March 1977. He has no plans to retire.

“As long as I’m blessed with good health and am effective and having fun, I’ll stay,” Santoro said.

The fun started in 1967 when he met his wife Pat while both were attending Chadron State College. The couple married in 1971.

Santoro went to work as a guidance counselor with the Chadron Job Corps from 1971 to 1976. He became a State Farm agent in Chadron in 1977.

In 1983, Santoro entered management with State Farm in Omaha, Nebr.

He was promoted to North Dakota state director in 1995 and in 1999, went to work in the State Farm Corporate Headquarters in Bloomington, Ill.

In 2000, Santoro was promoted to vice president, responsible for 420 agents in Minnesota.

“What led me to Los Alamos was I was looking to launch a business of my own,” Santoro said. “I was looking for three things in my new business – I wanted a key to the front door, I wanted to set my own calendar and I didn’t want to have to wear a suit.”

Fate stepped in later that year to grant Santoro his three wishes.

He and his wife traveled through the southwest on their way to visit their son Casey at Arizona State University. They stopped in Santa Fe, toured Bandelier and discovered that both State Farm agents in Los Alamos had retired and had not been replaced.

“Pat jokingly said, ‘Why do you become an agent, you started as an agent and loved it,’” Santoro said. “That was nine years ago and it’s been a great fit.”

Louis Santoro Insurance Agency Inc. has achieved Million Dollar Roundtable status, which less than 1 percent of all agents in all companies ever achieve, he said.

His agency also has finished in the top 50 agencies in the company and has sustained that ranking for five years.

“Along with auto and home owners insurance, we’ve introduced a financial piece that includes mutual funds, long term care, banking and life insurance,” Santoro said. “But the thing I’m most proud of is mentoring three agents including my son Casey, Michael Berry and Shelly Moeller.”

Santoro serves on The Family YMCA Board of Directors/Chairman’s Roundtable and the Los Alamos Commerce and Development Corporation Board. His agency is a five-time recipient of the community’s 1st Place Readers Choice Award. He is a Leadership Los Alamos graduate.

Santoro’s professional achievements include being a 24-year Ambassador Travelor, a member of the National Association of Insurance & Financial Advisors and a Lifetime Presidents Club member – the highest honor bestowed on an agent for sales performance.