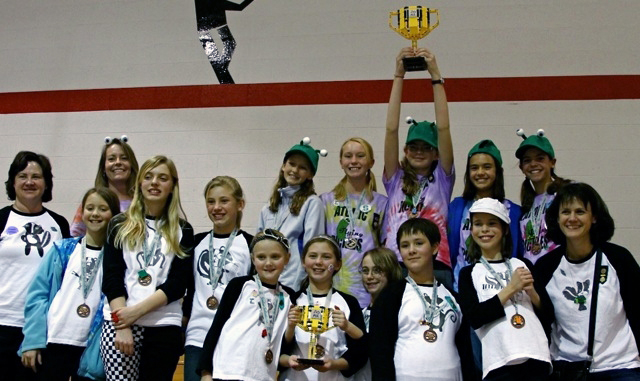 On Jan. 26, two Los Alamos FLL (FIRST LEGO League) teams competed in Albuquerque for the State  FLL Championship. Team one was the “Atomic Flying Pickles” comprised of 6th grade Girl Scouts, under the direction of Susannah Rousculp and Scott Doebling.

Team two was a mixed 5th and 6th grade girl team (also Girl Scouts), under the direction of Karen Doebling and Vicki Erikkila, called the “Banoona Skunk Band.” Their teams competed against 27 other mixed teams from across the state, and one from Durango, Colo.

At the end of the day, the “Atomic Flying Pickles” brought home the coveted “1st Place Champions” Award. According to the FLL website, this award recognizes a team that embodies the FLL experience, by fully embracing the FLL Core Values while achieving excellence and innovation in both the Robot Game and Project.

This highest standing award qualified their team to attend two prestigious competitions coming up in the near future. They will first attend the World’s FLL Competition in St. Louis in April and then the FLL North American Open Championship at Lego Land, Calif., in May. They will begin fundraising efforts soon to insure their team is able to attend these events.

The “Banoona Skunk Band” was honored with the “Inspiration” Award for outstanding team spirit and enthusiasm. Both teams shared a “Community Outreach” Award from the Girl Scout Council for FLL education and promotion in their Los Alamos community.

According to their website, FLL, or FIRST LEGO League is a robotics program for 9 to 14 year olds which is designed to get children excited about science and technology – and teach them valuable employment and life skills.

Teams, composed of up to 10 children with at least one adult coach, can come from a classroom setting, a pre-existing club or organization, homeschooled, or just be a group of friends who wish to do something awesome.

The idea is to program an autonomous robot (using the LEGO MINDSTORMS robot set) to score points on a thematic playing surface, creating an innovative solution to a problem as part of their project, all while being guided by the FLL Core Values.

These three elements – the Robot Game, Project, and FLL Core Values – make up a yearly challenge. This year’s challenge was “Senior Solutions.” Teams trouble shot ways to help seniors navigate physical and other challenges, advanced age may bring on.

Major tournament sponsors included Lockheed Martin, Northrop Grumman, Boeing, EvaluMation, and the New Mexico Museum of Natural History and Science. Both the “Atomic Flying Pickles” and the “Banoona Skunk Band” got additional, and much appreciated sponsorship from the Northern New Mexico Chapter of ASME (American Society of Mechanical Engineering.)

For additional information on FLL, you can go to their website under FIRST “LEGO” LEAGUE at http://firstlegoleague.org/.