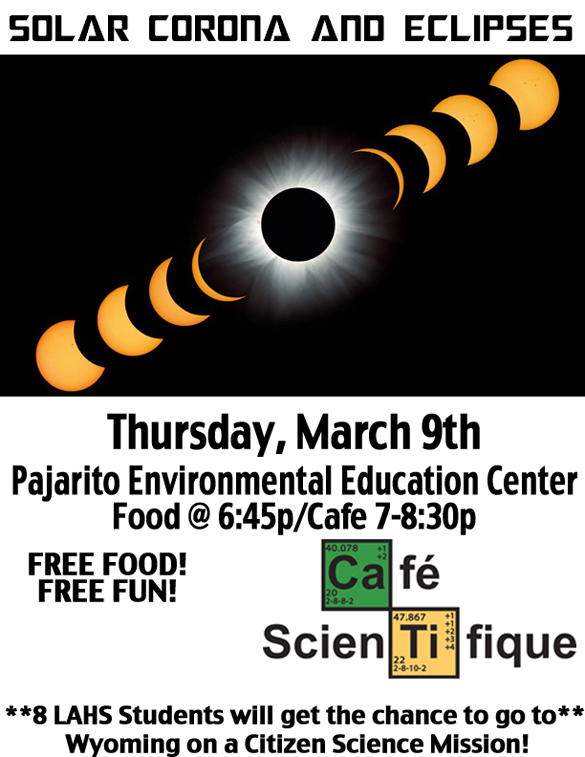 SCIENCE News:
Café Scientifique Los Alamos is hosting a Teen Science Café at 7 p.m., Thursday, March 9 in the Pajarito Environmental Education Center (PEEC).
The presentation will focus on the Sun’s Corona Observed During A Solar Eclipse.
Café Presenter, Dr. Galen Gisler of Los Alamos National Laboratory will present on sun’s corona, which is normally visible only during a total solar eclipse and why this is important. He also will talk about the upcoming solar eclipse Aug. 21 and the path it will be take to seen as a full solar eclipse across the US.
Eight Los Alamos High School students will get the chance to travel to Wyoming as part of the Citizen Continental-America Telescopic Eclipse Experiment with Dr. Gisler. They will cover the eclipse as a citizen science team where observers will be positioned at regular intervals, such that as the shadow of the Moon leaves one observer, it will fall on the next one to the east. In this way, Citizen CATE establishes a “relay race” of coronal observations, with one group of observers passing the baton to the next group every 2 minutes or so.
For more information and directions, visit www.Cafenm.org, and for questions, contact RJ Montaño at RJ@scieds.com.
About Dr. Galen Gisler:
Born on the high plains of Eastern New Mexico, flat country under a star-studded dome. Galen Gisler was fascinated by what he saw up there. He read books that gave him facts, but was driven to know what was behind those facts: “how can we figure out what those points of light are made of, how far away are they, and how do they shine?”
Clyde Tombaugh, the discoverer of Pluto, visited Galen’s high school. “It was exciting to meet the only person living at that time who had discovered a planet! More importantly, here was a man, who started out a country boy like me, who had become a distinguished astronomer, able to make his own discoveries. Nowadays planets are being discovered around other stars almost every day, and Pluto itself has been demoted – though not for me!”
Galen worked hard in school, and got a scholarship that sent him to Yale University. There he had his first chance to look through a real telescope. “In a darkening sky I pointed it at Saturn, and was transfixed. There it was, exposed to my own eyes, not a picture, but the real thing, so pretty, jewel-like, in the background of a velvety sky.”
He was enrolled in a course on observational astronomy, and could play with the coolest toys in the world. Not just the telescope, but the measuring engines, the darkrooms (they used photographic plates back then!), and the hand calculators.
Was it possible that science could be so much fun? “With these ‘toys’, and my hands and mind, I measured the distance to a star! The things that I had read about as a child were coming within my reach.”
On the 7th of March, 1970, his astronomy class took a field trip to Nantucket Island, where there was to be a total solar eclipse. Although the skies were cloudy during the ferry ride, they cleared as the class set up the instruments at the Maria Mitchell Observatory. It was an amazing, unforgettable experience. “The phenomenon was spectacular, much more real than any picture I had seen. We made careful observations of the times of entry into and exit from totality, experienced seeing the stars in the daytime, and recorded observations of shadow bands, animal behaviors, and so on. I also took photographs with my own camera, but they were disappointing.”
After Yale, Galen went to graduate school at the University of Cambridge, England. There, people at the pinnacle of the scientific world surrounded him. Martin Rees, who later became Sir (and then Lord) Martin Rees, Astronomer Royal. Stephen Hawking had an office opposite the group office for graduate students, and he could hear the music his specially fitted typewriter made as he derived his theories and wrote his books. Many luminaries came to visit while he was there, including Carl Sagan and Kip Thorne. Those were heady times for this country boy.
“I have studied big bang cosmology, the formation and evolution of galaxies, the structure of the sun and stars, gamma-ray bursts, tsunamis, and volcanoes. Right now I am mostly occupied with asteroid impacts and how to prevent them.” But the sun has long been a “hobby” of Galens, ever since that eclipse during his sophomore year at Yale. “This summer I will participate in another eclipse expedition as part of the great Continental American Telescopic Eclipse on August 21, 2017.”
About Café Scientifique New Mexico:
We started our journey with Café Scientifique in 2007. It’s a free, fun way for teens to explore the latest ideas in science and technology. Stimulating conversations with scientists, engineers, and inventors take place in an informal and relaxed setting.
Free food is served!
The program is run by teens for teens at central locations in Albuquerque, Española, Los Alamos, Rio Rancho and Taos. This program is made possible with funding from the National Science Foundation, Los Alamos National Lab, & Northern New Mexico College.
Menu
Los Alamos
37°
Fair
7:16am6:23pm MDT
Feels like: 34°F
Wind: 5mph SE
Humidity: 47%
Pressure: 30.25"Hg
UV index: 0
ThuFriSat
64/41°F
66/43°F
66/43°F
Weather forecast Los Alamos, New Mexico ▸