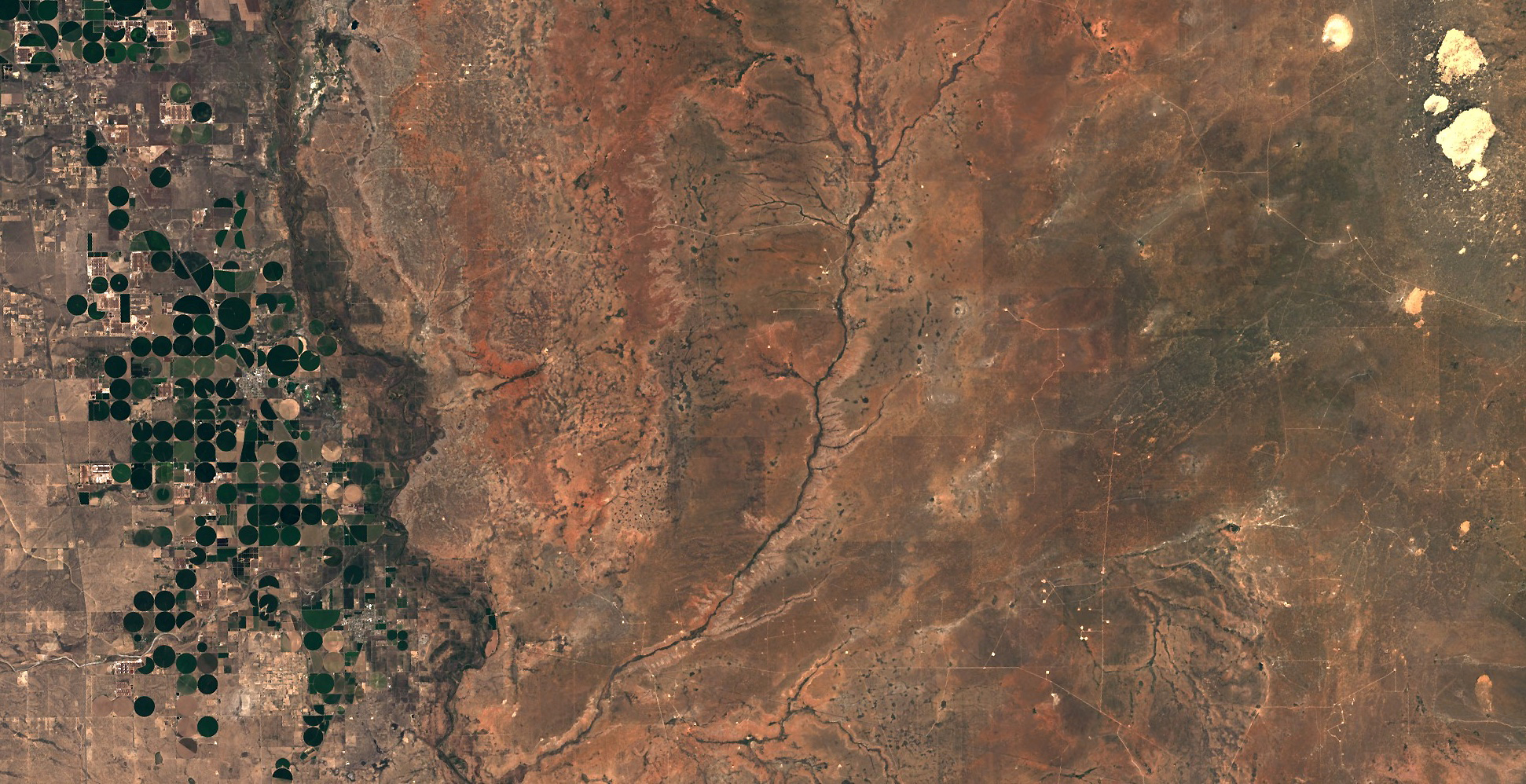 Descartes Labs artificial intelligence can race through mountains of data and read a landscape in seconds. An early emphasis for this technology is in evaluating and predicting agricultural output, like these irrigated fields near Roswell. Courtesy/2015 NASA/LANDSAT

Los Alamos pixels and Los Alamos dots were both riding high this week.

Descartes Labs, Inc., a one-year-old company specializing in satellite imagery recognition and analysis, announced Tuesday that it had raised $5 million in a venture capital round, thanks to a group of investors led by Cultivian Sandbox, a firm based in Chicago.

Descartes Labs uses a cloud-based supercomputer to convert massive amounts of satellite data produced by NASA into a continuously updated daily view of agriculture across the U.S.

At the same time, UbiQD, LLC, a quantum dot manufacturer that also got its start in 2014, reported that it had won a Northern New Mexico 20/20 Award as one of the most promising high growth companies in the region. UbiQD recently completed another round of seed funding, bringing their financing total up to more than $700,000.

The company CEO and founder Hunter McDaniel said he was inspired by Descartes Labs and the prospects for regional economic growth.

“I think it’s fantastic news that Descartes has been able to secure their venture capital financing round and remain in Los Alamos. It raises the status of our little mountain town in the startup community and it’s encouraging because we intend to raise a similar amount of funding next year, while remaining in town.”

Also Tuesday, U.S. Sen. Tom Udall announced that he was proposing a new piece of legislation, dubbed the ATTAIN Act, an acronym that stands for the Accelerating Technology Transfer to Advance Innovation for the Nation, a consolidated set of policy improvements for moving new technologies into the marketplace.

“I’m proud we’ve made some real strides on tech transfer, but that means we need to build on the momentum and keep pushing to make more progress.” Udall said.

Building on suggestions from a recent fact-finding visit to New Mexico and previous campaigns to commercialize New Mexico’s defense-related technological base, his bill would also provide a way to measure tech transfer progress at DOE and channel additional startup funding to neglected areas with unrealized potential.

UbiQD comes out of 20 years of research at LANL, where quantum dots (the QD in the company’s name) used to be called nanocrystals. The company name is a kind of pun on the word “ubiquity,” which means everywhere. Quantum dots have been described as a kind of all-purpose, artificial atom that can be tailored to solve many different kinds of material problems, from solar power efficiencies to luminescent paint, security features in bank notes and novel pigments for cosmetics. There are competitors, but McDaniel says UbiQD’s products have the advantage of lower cost and lower toxicity.

UbiQD has two full time employees with a support staff that includes another five or six people. “We plan to double our workforce next year,” McDaniel said. “We plan to keep doubling. Sales are growing pretty rapidly. While working to develop products, the company is selling related software to national labs, universities, research groups and companies, much of that out of state and out of the country.

“At some point, we’ll pick one market and focus most of our efforts on that,” he said. “For now we’re exploring possibilities, where the market is pulling us and what would be the biggest opportunity.”

Descartes Labs has a staff of 13 people, most of whom work in Los Alamos. The team that started the company worked for a number of years on developing a technology that analyzed satellite imagery to understand the effects and behaviors of hurricanes and wildfires and has now staked out a global territory of natural resources, starting with agriculture.

In an announcement Tuesday, Mark Johnson, CEO of Descartes Labs said the company released its first product in August, which analyzed corn production in the U.S. “We are more accurate than the USDA and moved the price of corn 3 percent in one day, thanks to some good press in Bloomberg News,” he said. The news about the investment was worthy of a story in the Wall Street Journal, Tuesday.

Co-Founder and Chief Technical Officer Steven Brumby said agricultural monitoring has been extremely out of date. “USDA does surveys during the year and a few field visits, but a report for each county only comes out the next year,” he said. “We’re able to watch it all changing.”

The value of the information goes well beyond commercialization, Brumby said, because it can also serve as an early warning for famine and for climate.