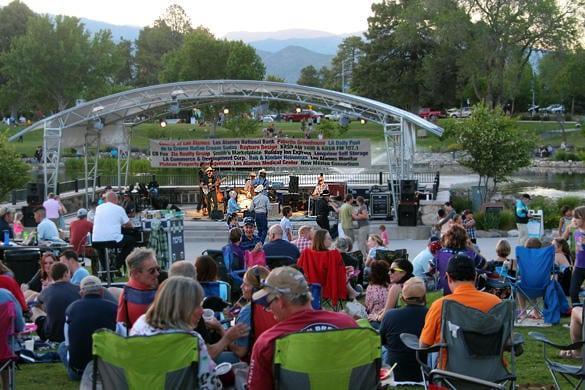 A crowd gathers to listen to music during the 2017 Summer Concert Series. Photo by Bonnie J. Gordon/ladailypost.com 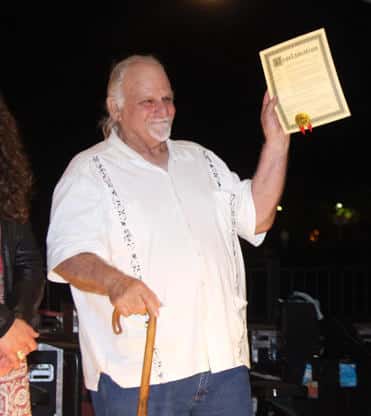 When Los Alamos patron saint of rock‘n roll, Russ Gordon, announced his retirement last year, fans feared 2017 would be the final season for the Los Alamos Summer Concert Series. Gordon coordinated and managed the Concert Series for 28 years. Who could possibly take over?

When Gordon went looking for someone to fill his shoes, he found the perfect fit very close to home. His son, Abe Gordon, and future daughter-in-law, Kara Robinson, agreed to take on the job of coordinating the Concert Series. They won’t even have to change the name of the company. Gordon’s Concerts lives!

“I’m just thrilled,” Russ said. “They’re doing great. I’m helping out of course. It was hard to step back, but now I get to be involved without doing the hard physical work. People don’t realize what’s involved in putting on a show.”

Russ plans to be on the scene, enjoying the show, during this year’s Summer Concerts. As always, the concerts are at 7 p.m. at Ashley Pond.

Gordon shared his excitement about this year’s line-up. The first concert will be a reggae show by Dre Z Melodi. Dre Z, aka Andres Estrada, grew up in Jemez Springs and has many connections to Los Alamos, he said. 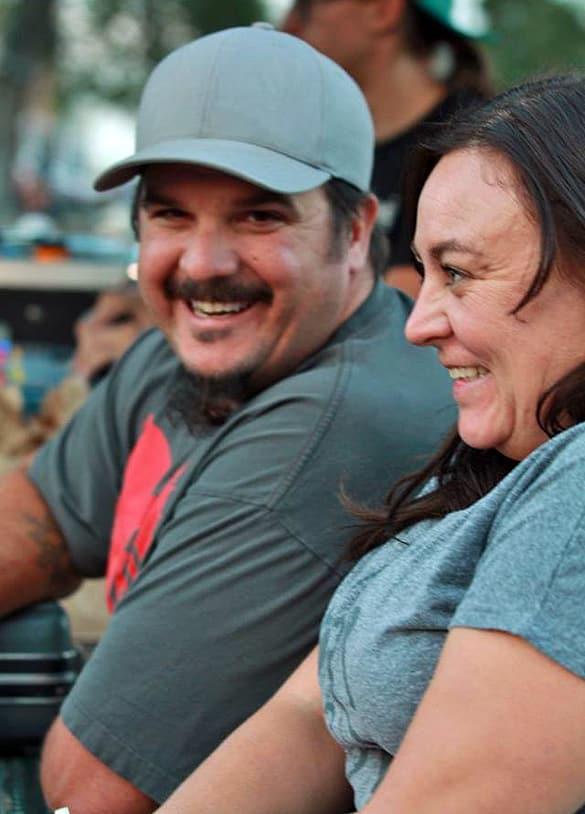 Abe Gordon and his fiancée, Kara Robinson, took time out from their busy lives, which encompass not only the Concert Series, but full-on planning for their September wedding and two full-time jobs, to speak with the Daily Post about the 2018 Concert Series and introduce themselves to the Los Alamos Community last week.

Gordon and Robertson met as teenagers in Los Alamos and dated, but then went their separate ways. Eighteen years later, they reconnected when Robertson moved back to New Mexico from Colorado. Four years after that, they were making marriage plans.

“Our first date was a concert and we’ve been going to concerts together ever since,” Gordon said.

“I love working at the Lab,” she said. “Everyone I knew as a kid was dying to get out of Los Alamos, but I couldn’t wait to come back!”

Gordon is a certified peer support worker at a wellness center in Taos that, among other things, works with people who are struggling with addiction issues free of charge. As part of his job, Gordon travels with a mobile wellness unit to far-flung rural communities like Questa and Mora to provide services to people who would otherwise be without support. Gordon has a strong personal connection to his work.

“I struggled with addiction through my teens and 20s,” Gordon said. “At the age of 31 I joined the Delancey Street program and I’ve been in recovery since then. I have found that being of service is what makes me happy.”

After being award the contract to do the Concert Series in late March, Gordon and Robinson scrambled to book acts. A wide variety of styles are represented, including country, Latin jazz, zydeco and much, much more.

“It was incredible that we had the whole Series booked in a month,” Robertson said. “One act cancelled yesterday, so now we’re looking to fill that spot.”

“The formula works, so there’s not a lot we’re going to change,” Robertson said. “It’s so awesome Los Alamos does this. We’re coordinating with community events and we want the community to be as involved as possible.”

Gordon and Robertson want the Concert Series to offer something for everyone, and this year, for the first time, the Series will include a hip-hop act. Carnage The Executioner,  MC, beatboxer, rapper, hip-hopper and storyteller, will present an all-ages show on LA Youth Night, Aug 17.

“He’s giving a workshop, so people can see what he does and how he does it and maybe even try it themselves,” Robertson said.

“We really want to get the youth involved with the Concert Series,” Robertson said. “We’re working with the Teen Center and the schools on Youth Night.”

Everyone one will be wondering what night the Red Elvises will return to Los Alamos for their annual show. The answer is June 15! That concert is Pride Night in conjunction with Los Alamos Pride Week.

Robertson said the hardest thing about running the Concert Series is fund raising. Community members can help by emailing gordonsconcerts@outlook.com or calling 505.423.3048 to receive a donation form or simply send a check to Gordon’s Concerts PO Box 2187 Espanola, NM 87532. Donors can also visit gordonssummerconcerts.com and contribute through PayPal. The website will soon be updated with all the latest concert information.

“I’ve been working on concerts since I was a kid,” Gordon said. “The Concert Series helped make me the person I am. I once asked my dad why he put on free concerts instead of charging money. He told me love and community are more important than money. I feel so proud that he’s pleased with what we’re doing.”