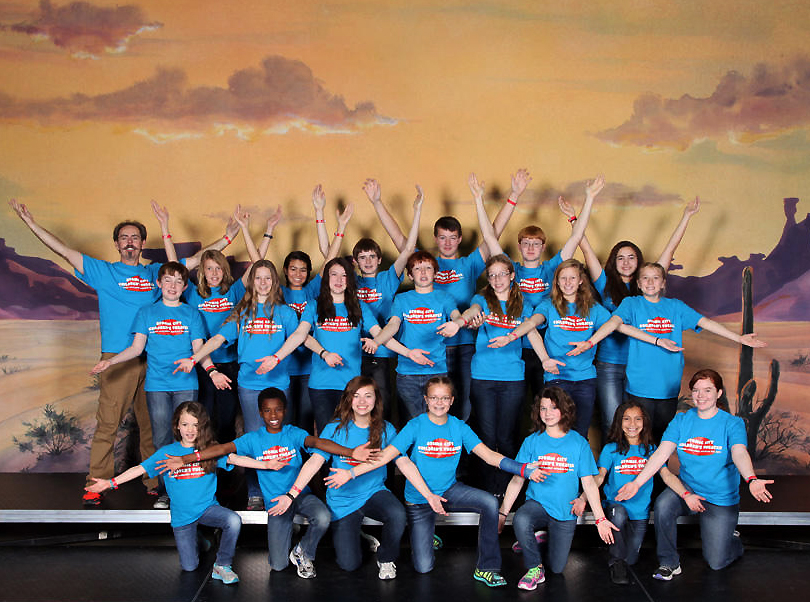 “Atomic Children’s Theater’s performance at the 2014 JTF was inspiring! This group truly shared their spirit through their performance,” Kennedy said.

Students Jospeh Sarrao and Maya Rogers were named to the Junior Theater Festival All-Stars, made up of two outstanding performers from each group attending the festival. The All-Stars performed a song during the closing ceremony for all 4,500 festival attendees.

Tony-nominated composers Benj Pasek and Justin Paul, Andy Jones (Rodgers and Hammerstein’s Cinderella), Heidi Blickenstaff (The Little Mermaid), Ashley Brown (the original Mary Poppins), Merle Dandridge (Tarzan,Aida), Josh Strickland (the original Tarzan), Andrew Keenan-Bolger (Newsies), and Alton Fitzgerald White (The Lion King), were some of the Broadway stars on hand to applaud the 4,500 students and teachers representing 93 groups from 26 states and the District of Columbia at the festival.

The Junior Theater Festival offered an enthusiastic environment for students and teachers to interact with thousands of others who share their passion for musical theater. In addition to presenting a 15-minute selection from a musical, both students and teachers participated in interactive workshops led by Broadway and West End professionals, gain from professional development and enjoy theatrical fellowship.

Atomic City Children’s Theater is an after-school theater program offered by the Los Alamos Public School system to encourage academic excellence in students through direct involvement in live theater. The directing staff is made up primarily of district faculty.

For the group’s Junior Theater Festival trip, Atomic City Children’s Theater employs a “multiple casting” strategy to allow students to maximize their growth and experience—performers switch parts for each scene.

Additionally, students Nora Cullinan and Daniel Sarrao were named to the Broadway JR. All-Stars, made up of two outstanding students from each group at the festival. Student Lauren Partin was one of 80 students selected for a final call-back for future Broadway Junior shoots for “how-to” choreography videos for soon-to-be released Broadway Junior musicals.

All festival attendees attended a professional production of Broadway and Beyond: An Evening with the Stars of Disney on Broadway! This special JTF exclusive event featured five Broadway performers (Heidi Blickenstaff, Ashley Brown, Merle Dandridge, Josh Strickland and Alton Fitzgerald White) singing songs from the award-winning musicals in which they starred on Broadway as well as other favorites from the Disney on Broadway catalogue.

There was also a tech track in which students interested in technical theater trained with professionals, a select group of these student technicians were invited to work side-by-side with festival staff in running the tech for main stage festival events.

The Junior Theater Festival was founded in 2003. In 2010 the Festival became an annual event.