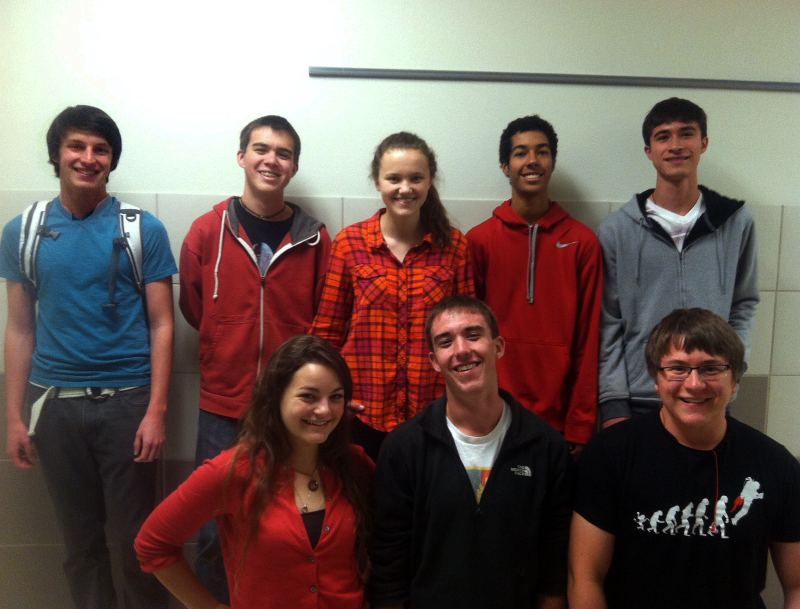 Emma Lathrop, top row center, with several students who have either supported her educational revolution movement or have actually “D”ed out. Courtesy photo

“This is the beginning of an educational revolution OF New Mexico students, BY New Mexico students, and for ALL New Mexicans,” says Lathrop. “We students are fed up with the State’s plethora of new standardized tests and their initiation of a punitive and ill-planned evaluation system and have decided to take a stand.”

Monday night she began the Facebook page, “New Mexico Students “D”mand Better,” which has grown to 403 likes as of this morning.

“In an attempt to force the State to finally listen to educators and students, I am encouraging kids to “D” out on their EoCs that do not affect their graduation status or their grade in a class,” Lathrop said. “What this means is that students will answer “D” to every multiple choice question and tell the State what else they “D”mand in their free response questions, while capitalizing every “D.” It is my hope that the voices of students, teachers, administrators, and school board members that have been silenced by PED will finally be heard. The infatuation with testing at the cost of instruction HAS to be stopped.”

Lathrop explained that her class was the first group of students to have to take the week long NMSBA standardized test as 3rd graders.

“We have taken MAPS tests throughout school, and we were the second class to have to pass the High School Graduation Assessment in order to graduate,” she said. “Now, if the State continues on their rampage, every student (K-12) will have to take an End of Course Exam in every class they take. Classes like Fine Arts, Robotics, Band, Orchestra, Student Aid periods, and elementary specials like P.E., art, music, and computers, all of which are meant to give students a break from the regular classroom and express themselves, will now be a part of the standardized testing process.”

The EoCs will be coupled with the final written test and given by a teacher. In the New Mexico History Courses offered at LAHS – that means students will answer 245 multiple choice questions in a 2 hour period. Lathrop said students are fed up with the testing. We are tired of being defined by a test score and having teachers punished through them as well.

Lathrop says that because PED is rolling its plan out with “no real thought or consideration,” the problems seen on the EoCs are many:

• A student from Taos High School posted on the Facebook page that last year after she took her EoC in English and her class was going over the questions, they found that one of the questions didn’t have a right answer.

•One of the questions on the Economics EoC had the same option for an answer repeated twice. If that was the right answer, there was only a 50 percent chance that students who knew it would get it right.

•Many teachers weren’t given the standards their students would be tested on until a few weeks before the actual test.

•The standards that the EoC will cover for the New Mexico History test are particularly flawed. One of them is repeated on the second page, another asks students to explain and analyze how water is a “scare” resource in New Mexico. The worst one requires students to know how “cooperation and conflict are involved in shaping the distribution of political, social and economic factors in New Mexico, Israel and the Middle East, the former Soviet Union, and Sub-Saharan Africa,” in New Mexico History.

•Students have also said that the test spelled the word “drought” wrong, one question was incomprehensible, and another was repeated on another page.

Students are not opposed to taking tests, she said.

“Testing is part of education and learning and we understand that. However, the EoCs are yet another test in every class, and their sole purpose is to provide a relatively arbitrary data point for the state to use against our teachers,” Lathrop said. “We are encouraging students who have “D”ed out to talk to their parents and explain to they why they did so, as well as let their parents know that the four EoCs given at LAHS this semester (Health, Economics, Government, and New Mexico History) are NOT going to affect their graduation status nor their final grade in a class (unless specified by the teacher) and are only going to be used to punish teachers.”

“They recognize that their voices and those of our administrators and education professionals have been ignored by the Public Education Department, and ONLY students and parents are left to end the testing madness,” Lathrop said.