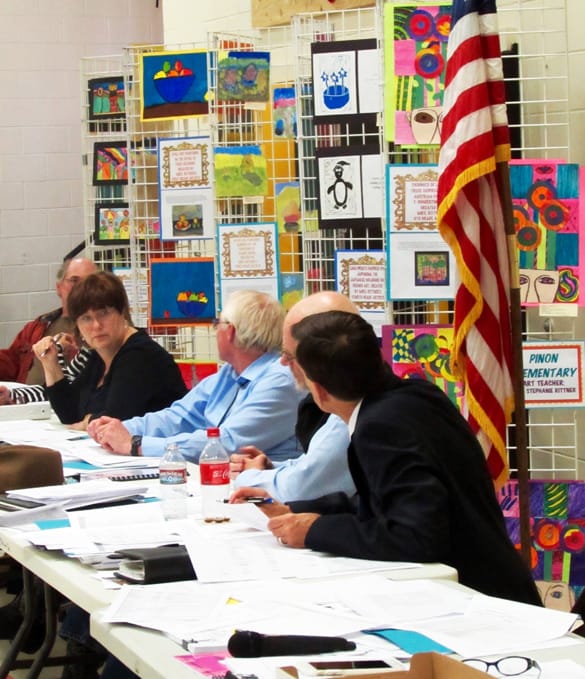 After a long deliberation, the Los Alamos Public Schools (LAPS) Board of Education approved the budget for the 2015-2016 school year, during a special board meeting Thursday evening at Chamisa Elementary School.

The budget is $38.8 million, which is a $1.6 million increase over the current budget.

While the budget was approved, there were amendments. The board agreed to remove funding for a contracted public information officer as well as a human resource employee. Taking away these two positions, LAPS Chief Financial Officer Lisa Montoya said removes $150,000 from the budget.

The motion to approve the budget was passed four to one. Board President Jim Hall cast the opposing vote. With funds declining from the state’s two main revenue sources, the federal government and the oil and gas industry, Hall was concerned that the budget included taking $1 million out of the school district’s $7 million lease facility fund and putting it into the operational fund.

He said he was “hesitant to dip into the corpus,” and recommended LAPS administrators draft a budget proposal that did not include extracting money from the lease fund and bring it back to the board at another meeting. Furthermore, he suggested the board be presented specific add-on items to the budget and that whole discussion be put on tape.

Barranca Elementary School Teacher Andrea Determan shared Hall’s concerns about dipping into lease funds as well as the proposal to hire a public information officer and human resource employee, especially since current employees had not received raises in a few years.

Her biggest issue was for the students. “I’m concerned about our kids,” she said. “Let’s take this slow.”

It was pointed out that the budget is due to the state May 1. Board Secretary Andrea Cunningham agreed the board should be active in creating the budget but was doubtful they could do it in a few days. She suggested the board get involved at the start of the budget cycle to determine whether or not expenditures are meeting needs.

She added she was pleased that mental health was listed among the priorities the budget supports. The other priorities are salaries and professional development. Cunningham said mental health “is one of the most important things we can support and fund.”

Board Member Bill Hargraves also voiced his support for funding mental health. In regard to integrating the American School Counselors Association model in the district, he said, “it is important for the board to be involved in the effort.”

Procurement Consultant June Gladney pointed out that the majority of the budget is for staff. If the board did not want to touch personnel then she recommended the budget be passed. Without effecting personnel it would be impossible to pull out $1 million from the budget, Gladney said, adding, “that is a question you need to ask.”

Despite the differing views on the budget, the board commended LAPS administrators for their work in preparing it.