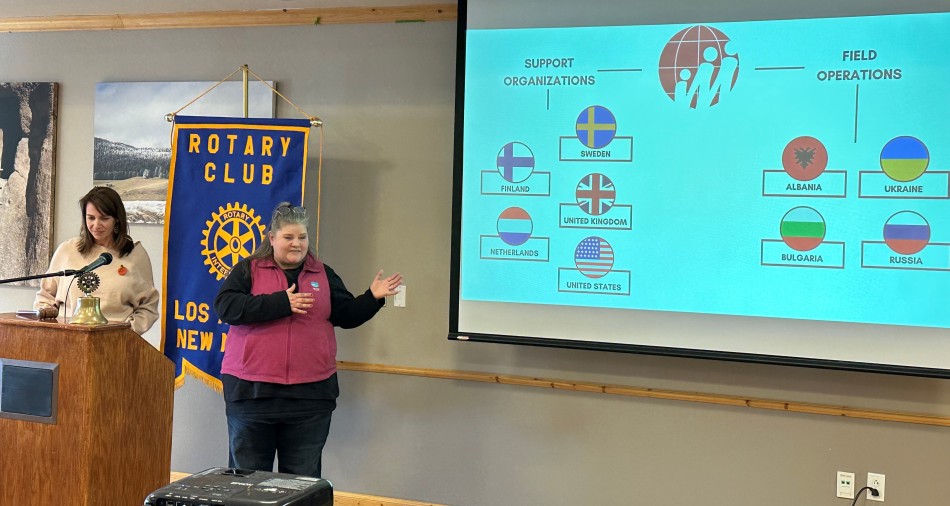 “Our founder was inspired by Brother Andrew, a Dutch missionary, who smuggled Bibles into the Soviet Union, sewn in the linings of coats,” began Addie Murphy and Joy Eklund, referring to the work of Mission Possible when they spoke to the Rotary Club of Los Alamos Nov. 15.

Murphy and Eklund were here to celebrate the 75th anniversary of the United Church whose mission board generously supports Mission Possible’s work.

The non-profit is “a Christian mission and aid organization serving Eastern Europe.” Mission Possible’s goal since its founding in 1974 has been “to equip the local Church in Eastern Europe for works of service and to reach needy and searching people in bringing them the Gospel message, Biblical teaching, and life-changing help.”

Upon the fall of the Soviet Union in 1991 and the relative freedoms of religious faith now allowed in Russia, it is no longer necessary to treat Bibles as contraband; however, spiritual needs, as well as physical and mental health needs, remain for large populations in Eastern Europe.

Mission Possible focuses on working through the local church to meet specific needs:

Murphy described the suffering of street children in Siberia as one of the most heart-wrenching experiences she had while serving in Russia where 4,000,000 children were left homeless after the fall of communism. Over the years Mission Possible has provided shelter to thousands of children and their mothers. The organization currently operates seven homes, and in 2021 was able to provide for 240 children and almost 120 mothers. These residents averaged a stay of one year in these safe surroundings, and the children were “allowed to be regular kids.”

In assisting the Roma people of Bulgaria, Mission Possible has recruited numerous local Roma volunteer teachers to reach out to over 300 children whose families live without electricity and running water.  Without access to online distance education, traditional teaching takes place in the local church. In Ukraine, where distance learning is accessible, Mission Possible instructs students about how to use donated Wi-Fi cards and cell phones to enhance learning.

Eklund explained that Mission Possible is generally “able to meet a community’s exact needs” because staff and volunteers allow the citizens to identify their needs rather than impose Mission Possible suggestions upon them.

Of the four countries served, Murphy and Eklund confirmed that “Ukraine currently has the greatest needs.” The fall harvest season has passed, so food shortages are now eclipsed by fuel shortages as winter’s bitter weather and deadly temperatures grip so many vulnerable communities. Wood briquettes are most commonly provided for warmth and cooking and are in critical demand.

Most supplies are purchased in-country to reduce shipping costs and delays, to assure better chances for successful deliveries, and to support local farmers.

To learn more about Mission Possible and its “strategic projects for historic times for God’s glory” please go to www.mp.org.

To learn more about Brother Andrew (Anne van der Bijl), known as God’s Smuggler and author of a book by that name, and the Bible smuggling he initiated in the 1950s, go to this link.

Murphy, originally from the United Kingdom, immigrated to the U.S. when she was 20 years old.  Passionate about taking the message of the Gospel to the far ends of the earth, she traveled to Russia for the first time in 2000 as a short-term missionary and has returned at every opportunity since. Murphy left her career as a professional singer in 2007 to serve full-time in Eastern Europe with Mission Possible.  Now back in the States, she serves as the U.S. Coordinator for Mission Possible, connecting with supporters and raising awareness of the ministry’s needs.

Murphy lives in Winchester, Virginia in the Shenandoah Valley with her husband and dogs. The Murphys’ daughter is pursuing a nursing career in Richmond, Virginia.

Eklund is from the San Francisco Bay Area and taught in Nicaragua for three years. She spent another three years in Albuquerque at the University of New Mexico earning her MBA degree in non-profit management while working for a local mentoring program. After moving back to California, Eklund took a position with a large environmental services company, but still longed to serve in the non-profit sector. She grew up hearing the stories of the work being done through Mission Possible and was able to travel with them to Bulgaria in 2018. Since that trip, she has continued to be involved in the work of Mission Possible and was very excited to begin working with the organization in a more formal capacity earlier this year. Ecklund is looking forward to seeing how her education and experience can be used to support God’s work in Eastern Europe.

The Rotary Club of Los Alamos, through its Club Foundation, is a 501(c)3 non-profit and one of over 34,000 clubs worldwide. Rotary, which now has 1.5 million members, was founded in 1905; the local Club was chartered in 1966. Rotary areas of focus include promoting peace; fighting disease, particularly polio; providing clean water, sanitation, and hygiene; supporting education; saving and enhancing the lives of mothers and children; growing economies; and protecting the environment.

The Rotary Club of Los Alamos meets in person 12-1 p.m. Tuesdays, in the Community Room at Cottonwood on the Greens at the golf course. A Zoom option is available by contacting Rotary Club Vice President Linda Hull at 505.662.7950. Hull also is happy to provide information about the Club and its humanitarian service. The community is invited to attend meetings and become members.