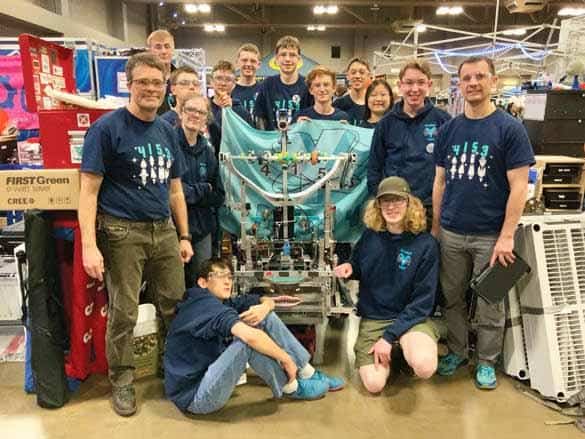 Team 4153, known as Project Y, with their robot at a recent competition. Courtesy photo
Click here to see a video of the robot in action
By BONNIE J. GORDON
Los Alamos Daily Post
bjgordon@ladailypost.com

“Our team has met the challenges and rigors of the competition, head-on,” team member Max Pasulka said. “We were a finalist at the El Paso competition of more than 50 teams, and made it to quarterfinals at the Amarillo meet. Along with being rewarded the Industrial Design award for innovative solutions in mechanical design and the Innovation in Control award for exceptional control systems, our outstanding performance at regional competitions allowed us to participate at the Texas District Championship in Austin.

“Our enthusiasm was recognized, and we were awarded the Team Spirit award. Our excitement, combined with our robot’s strong performance, allowed Project Y to qualify for the FIRST World Championship.”

Designed, built and programmed completely by high schoolers, the robots weigh more than 100 pounds each and tackle various challenges, such as object manipulation and platform traversal.

However, the competitions not only test each individual team’s engineering and technological prowess, it also tests teamwork and communication between randomly determined allies.

“Competing with more than 250 of the best teams in the world will provide our team an incredible opportunity, which teams in New Mexico don’t typically get,” Pasulka said.

The team left Wednesday for Houston.

Pasulka is a sophomore at Los Alamos High School. This is his second year with Project Y. He heard about the team from his robotics teacher, Don Davis.

Pasulka wants to be an electrical engineer and is taking robotics classes at UNM-Los Alamos.

This is the eighth year the Project Y team has competed in the FIRST Robotics Competition. This year, the competition involved building a robot that could handle discs, which are placed on towers first. Then a large ball is placed on top of the tilted disc and it rolls into a hopper.

Lead mentor Andy Erickson has been involved with Project Y for six years. He’s a mechanical engineer at Los Alamos National Laboratory. He attributes this year’s success to the team.

“They’re focused and passionate,” Erickson said. “Mentors help students focus and help them with skills they need. Erickson said. Students get exposed to all types of engineering. We’re building the next generation of STEM leaders for the country.”