Los Alamos Resident Rows In Bathtub For Good Cause 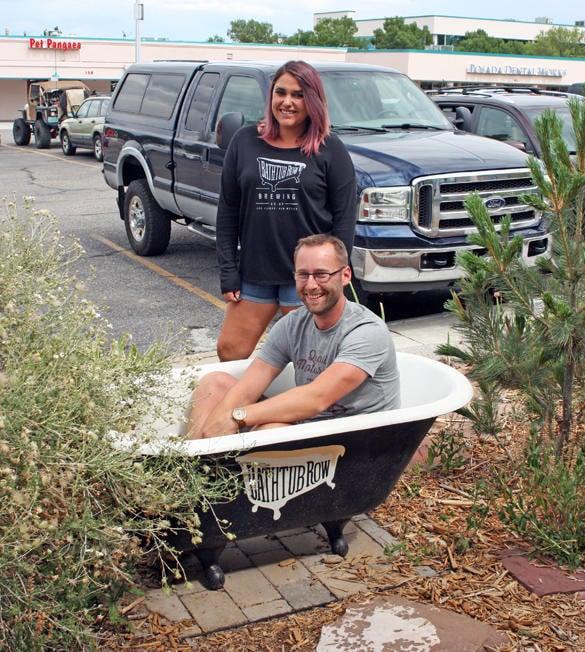 Many people have pedaled, swam, raced and walked for noble causes. Los Alamos resident and Los Alamos National Laboartory physicist Malcolm Burns is joining these legions of great athletes but he is doing it with a unique twist.

It all started with a story his wife Ruth’s grandfather told. “Last August, we were back in the UK and we visited … Ruth’s granddad, whom we call Papa. He knows that I like doing crazy stuff, and in making conversation he said he’d read in the paper about two guys who rowed Loch Ness in a bathtub,” Burns said in a press release. “He wondered if he made this up, and of course he had Alzheimer’s, so who knew what was real and wasn’t.”

Burns told his wife’s grandfather, “Well I’ll get a bathtub and I’ll do it!”

As it turns out, that was the last time Burns and his wife saw him as he died at the end of last year.

Ruth’s grandfather and his wild story, which turned out to be true, pushed Burns into action. Aug. 11, Burns will climb into a bathtub and row the length of Loch Lomond in Scotland to raise money for Alzheimer’s Scotland.

Loch Lomond is the longest lake in Scotland; it is 22.6 miles long and Burns said he figures it will take him at least 18 hours to row the entire lake. He said he plans to begin at 4 a.m.

This will not be a solo journey; Burns said his wife will kayak alongside him and their two young daughters are going to be in one of the two support boats. Burns said his eldest wants him to transfer her from one boat to the other in his bathtub.

“I got a really good support team,” he said. “The kids think I am crazy. The wife knows I am crazy but she’s super keen and really supportive.”

There has been a lot of support from the community as well. The first goal for the fundraiser was 500 pounds, Burns said. When that goal was reached, he raised it to 1,000 pounds.
Now, the goal is 2,000 pounds. One of the contributors is Bathtub Row Brewing Co-op in Los Alamos. Assistant Manager Ashley D’Anna said they wanted to support the cause because “It seemed so fitting.” She told Burns, “I think it’s awesome that you’re doing it.”

Burns said a friend, Maya Sandoval, offered another thought. “Some people drink to forget, some people row to remember,” she said.

The task isn’t as easy as just shoving a tub into the lake and hoping in. Burns outfitted a tub in the U.S. to train in but he will need to start all over again once he arrives in Scotland. He got his training tub through Habitat for Humanity in Santa Fe. His friend, Trevor Burris helped him refurbish it with PVC pipes and floats used on lobster cages.

“He’s been helping me convert the tub to make sure it is seaworthy,” Burns said.

Another friend in Scotland, who renovates houses, procured a bathtub for the actual event in Scotland.

“I just hope it’s not a corner unit or a jacuzzi one or cast iron,” Burns said.
His first training session with the tub was in a hot tub. Burns said he put the tub in a hot tub to see how it would do.

He then started to train at Abiquiu Lake and Cochiti. Rowing in a bathtub attracted a lot of attention, Burns said.

The comment Burns said he received most often was, “Did you buy it like that?” Saying he usually heard from a distance, “Is that a bathtub!?”

The longest he rowed in the lake was 9 kilometers and for 4 and a half hours. Burns said he also has been doing physical therapy for his back.

Although Scottish tubs are long and skinny, Burns, according to the press release, is 6 feet, 3 inches tall, and is worried about sitting in a bathtub for 18 hours straight. This is not the first ambitious physical feat Burns has undertaken.

In 2014, he and some friends swam Loch Lomond. He said the lake actually has several islands in it and they “island hopped” in 18 hours.
He is motivated to do this newest challenge because both he and his wife were close to her grandfather.

As a result of the grandfather’s disease, Burns decided to raise money for Alzheimer’s Scotland. According to the press release, Alzheimer Scotland was instrumental in caring for Ruth’s grandfather. Burns explained the organization mainly provides support for people dealing with dementia. Burns will further honor his wife’s grandfather by spreading some of his ashes on the lake. Originally from the United Kingdom, Burns and his family have lived in Los Alamos for two years.

He said he is very appreciative of all the local support he has gotten.

“It is pretty awesome,” he said.

To support Burns in his quest, visit https://www.justgiving.com/fundraising/papas-bathtub-row