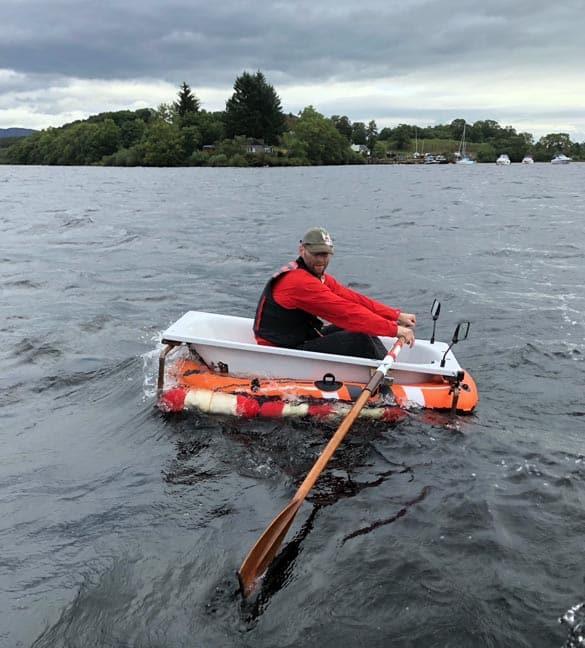 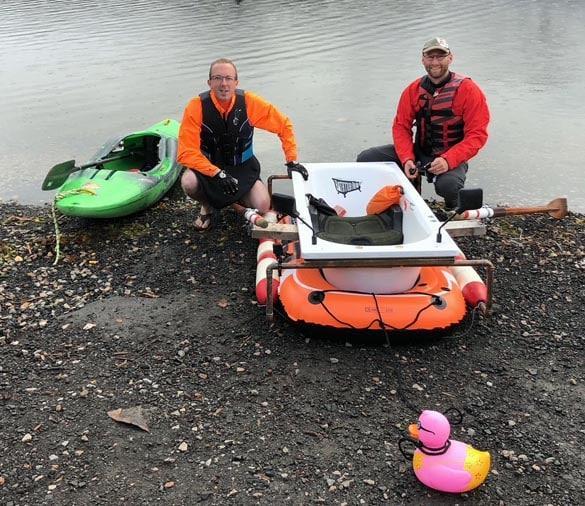 Malcolm Burns, right, and his brother-in-law Colin MacDonald pose next to his bathtub, which featured Bathtub Row Brewing Coop’s logo. Courtesy photo
By KIRSTEN LASKEY
Los Alamos Daily Post
kirsten@ladailypost.com
It took a bit of critical thinking, muscle and determination but Los Alamos resident and Los Alamos National Laboratory physicist Malcolm Burns did it. In August, he rowed the entire length of Loch Lomond in Scotland in a bathtub.
The feat was done over the course of two days. Burns said he rowed for a total of 15.5 hours and traveled just under 24 miles.
While rowing the longest lake in Scotland in a bathtub – the most unconventional of vessels – may seem a little crazy, Burns did it for a significant cause. He raised money for Alzheimer’s Scotland and to honor his wife Ruth’s grandfather.
In a press release issued prior to the event, Burns said, “Last August, we were back in the UK and we visited … Ruth’s granddad, whom we call Papa. He knows that I like doing crazy stuff, and in making conversation he said he’d read in the paper about two guys who rowed Loch Ness in a bathtub. He wondered if he made this up, and of course he had Alzheimer’s, so who knew what was real and wasn’t.”
Burns told his wife’s grandfather, “Well I’ll get a bathtub and I’ll do it!”
Ruth’s grandfather did not get to see Burns accomplish this challenge; sadly he died at the end of last year. However, Burns raised more than $4,000 for Alzheimer’s Scotland and during his journey, spread some of Papa’s ashes along the lake.
Accomplishing all of this wasn’t easy. Burns said he only had a week and two days before the big event and the bathtub a friend procured for it wasn’t exactly seaworthy. He worked with his father-in-law Sam, however as the tub was stainless steel and its walls were thin, he couldn’t use the design he came up with in the U.S. training tub. In the end, Burns’ wife thought of placing the tub in a rubber dinghy.
Even though the tub would now float, when Burns did a test run, he said he ended up bending one of the oars and had to borrow some wooden ones from a friend. There were other obstacles as well. The first day of his adventure, Burns described Loch Lomond as calm and that it looked like a mirror.
“I thought, ‘This is great … this is awesome … it can’t get better than this,’” he said.
But then another oar broke and Burns had to wait for his support boat to arrive to help fix it. Meanwhile his kayak support, brother-in-law Colin, aided him with a tow and some encouraging jokes. Fortunately, his father-in-law had the foresight to bring a bag of extra nuts and bolts and the oar problem was fixed. Then, the weather changed.
Burns said the lake went from calm to rough.
“Miraculously, I didn’t fill up with water. I just kind of grunted through it,” he said, and kept telling himself, “Just a matter of mind over matter. Just keep going and going.”
Before the challenge was over, Burns also had to deal with thick, low mist along the lake as well. Despite the weather, broken oars and a tub that required modifications, Burns said rowing in a bathtub was an excellent experience.
“I actually quite enjoyed myself,” he said.
When he finished on the second day, Burns said he felt great.
“It was awesome. I was obviously tired. It felt amazing to have done it,” he said.
Even the physical impact of rowing a bathtub through choppy water for hours at a time wasn’t as bad as he expected. Burns credited his physical therapist at Rebound for saving his back from potential agony. The people around him also helped lift his spirits. He explained that Loch Lomond is filled with islands and a few people camping on one of the islands poked their heads out of their tents and shouted at him as he rowed by, “Is that a bathtub?!”
His family and friends also helped him. Watching his two young daughters go tubing and hearing his brother-in-law’s jokes were some of the high points for Burns.
At the conclusion of his challenge, Burns said he felt he gained a lot from it.
“Every challenge I do I’ve gained the mentality not to quit,” he said.
But what was the bathtub’s fate? Unfortunately, it had to be tossed. Burns said he offered it to people to use as a planter for their gardens but didn’t get any takers.
So what’s Burns’ next adventure? He said his wife instructed him to not do anything that involves making his own transport. But, Burns said he would like to do a cycling challenge. 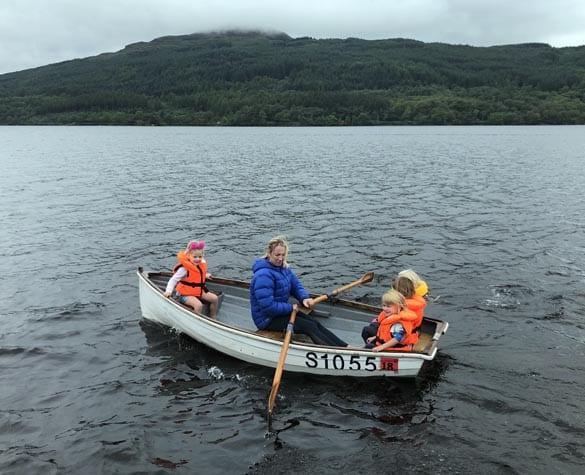 Malcolm Burns had support from friends and family all along his journey. Here, Laurie MacDonald rows the support boat. Courtesy photo