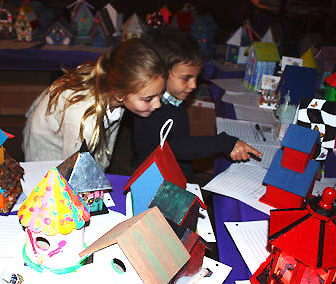 Bidders check out bird houses during this year’s Relay for Life. The entire event raised about $20,000 to fight cancer. Photo by Bonnie J. Gordon/ladailypost.com

After all the booths were dismantled and the final purple T-shirt was folded and packed away, two organizers of the Los Alamos Relay for Life took stock of the event and were proud of what they saw.

The event, held Aug. 23-24 at Ashley Pond, raised some $20,000 for the American Cancer Society and more than 100 people participated in the fundraising effort.

The birdhouse auction was declared a success; it raised $1,922 and despite the construction underway at the pond, there were no troubles with the new route and no complaints. Cindy Eaton and Alan Wadlinger, both longtime Relay for Life organizers, said they were pleased with this year’s Relay for Life.

“I always think it’s a big success. People turn out for it and it means so much,” Eaton said. She added the relay is an opportunity to support individuals in the community who have cancer, survived cancer, or lost someone to cancer.

The way people show support can create magical moments, Wadlinger said. For instance, one couple showed up at the relay, wanting to form a team and purchase T-shirts. The cost for two shirts would have been $20, Wadlinger said, but instead the couple handed over a check for $2,000.

“The magical moments that happen at the relay make it worthwhile,” he said.

Another special moment occurred when Relay for Life participant Hope Jaramillo gave a speech at the Survivor’s Dinner, detailing her own ongoing battle with cancer. Jaramillo’s Relay for Life team also introduced a new feature to the event – a s’mores party. They built a pit fire and sold the treats to raise funds for the event.

In addition, the Los Alamos County Summer Concert series showcased the Claire Lynch Band, the Masons hosted a breakfast, a Zumba class was held and Pet Pangaea offered a pet walk. Luminarias were also lit to honor those who have passed away from cancer.

Waldinger pointed out Relay for Life is much more than a fundraiser. “This is a fundraiser but it is really there for the people. It is supposed to be uplifting to those who have been affected by cancer in any way,” he said. “There’s something there for everybody.”

Cancer can bring out a variety of emotions in people, Waldinger said. Some see it as extremely scary while others become motivated to help. Last weekend, the community jumped to show support. Ridgeview Veterinary Clinic, Wadlinger and his wife, Summer Concert Promoter Russ Gordon and Los Alamos County are among the event’s biggest sponsors, Eaton said.

She added, Village Arts has also been a long-time supporter. “Every year they are supportive of us.”

Young people also got involved. Los Alamos High School cheerleaders and Key Club members were a great help. “Those high-schoolers came out in mass,” she said. “They helped in any way they could.”

Even though this year’s relay is a wrap, the work continues. Help is needed to prepare for next year’s Relay and donations are always accepted for the American Cancer Society. If interested in volunteering in the Relay for Life, contact Eaton at Cindy.Eaton@att.net. To donate, go to www.relayforlife.org.