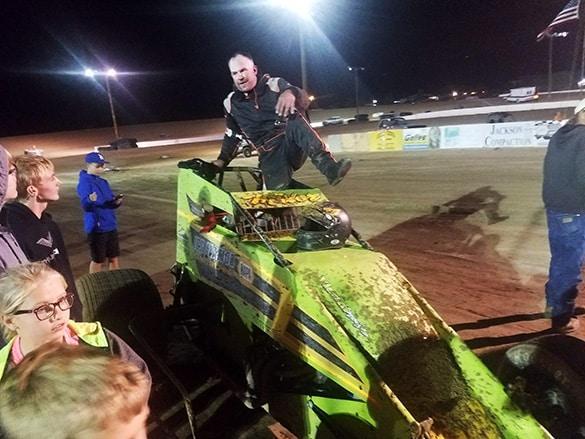 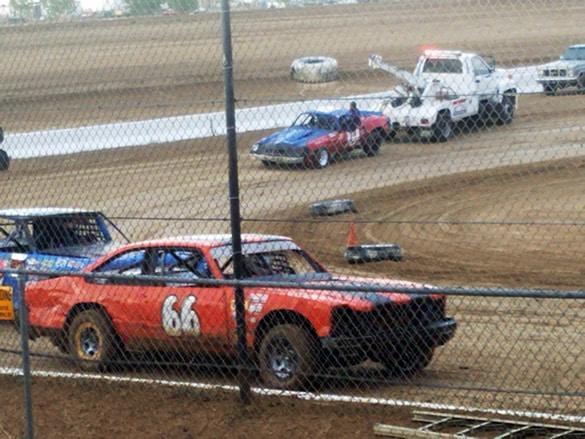 David Hand on the track in his #66 Chevy Nova Street Stock Aug. 11 at Sandia Speedway. Photo by Todd Urbatsch

We had to slip out of the Los Alamos Rodeo early to make the car races at Sandia Speedway west of Albuquerque. Speeding from dirt arena to dirt track wasn’t going to make up for stopping at home for my slow-poke boys to assemble warmer clothes. What did help, as Miss Sierra informed us at the gate, was a rain delay. She also admitted that the number of cars was poor due to a bigger draw in Las Cruces. “Well, is Clint Miller here in his A-Mod?” we asked.

We hadn’t seen Los Alamos’ Miller race since last year, and we always swelled with hometown pride at seeing the Los Alamos Knecht’s Napa Auto Parts advertisement in the track’s infield, “Home of the #56 A-Mod”.

This summer, Sandia Speedway had some “trash in the water well” problems. Or, as Sierra told us after the race, “One water truck sprung a leak, and the other dropped an axle”. Then the water level in the well dropped, and they dug out sand and they dug down to 1,500’ and still nothing worked. Finally. they dug another well to 2,000’. Two-thousand feet?! “Well, we’re up on the mesa here,” Sierra explained.

Nearly three months of closure isn’t good for a racetrack whose margins are probably tight at best.  Sandia Speedway re-opened about a month ago, and they did exactly what my buddy Mike O’Connor recommended in his “Dirt Track” magazine column: do more fan appreciation nights. Sandia dropped the ticket prices from $17 to $10 (ages 10 and under are free) and free parking. It sure brought in people; probably 300 or more.

The first several races after the re-opening had Cruisers (cars off the street with a rollcage and the glass removed) and Hornets (4-cylinder Cruisers), and, in increasing power/speed, Street Stocks, X-Mods, and winged Sprint cars. They also had flat-track motorcycle racing on the shorter track inside the main track.  But no A-Mods, and no Clint Miller.

Sierra checked with the other ticket-takers, “Yeah, we think Clint is here, but there’s only one A-Mod, and we’ve had to lump it in with the X-Mods”. Great! We’re going to see Clint. And the mini-sprints were already running their first heat race. We parked and rushed in past the beer cart (they don’t always have beer, but Palmer Brewery was there selling tonight’s forbidden fruit of lagers and IPAs) and Sally’s Concession Stand (good tasty green chile cheese burgers, nachos, small-ish frito pies; earplugs for $1).  Tonight’s lineup was Mini-Sprint Cars, Cruisers, Street Stocks, combined X-Mod and A-Mod, and unwinged, or Non-Wing, Sprint Cars (unwinged autocorrects to “unhinged”, which may not be far off).

The format of the race is one or more heat races in each class to determine qualifying order in the main events. In the intermission, they draw kids’ ticket numbers for prizes and adult ticket numbers for steak meals from the Texas Roadhouse and concert tickets at UNM. Young or old, the winners are beaming as they run/limp down the stands and up to Sierra to gather their prizes under the flagger’s stand.

Los Alamos also was represented by David Hand in his orange #66 Chevy Nova Street Stock. Hand, of Jona Manufacturing Services, Inc., raced Dwarf cars for a number of years throughout New Mexico and the Mountain West and last year moved up to Street Stocks. His car sounds tamer than the other Street Stocks, and he wasn’t as quick, but he was solid in his heat and main event. He texted later that he’s going to start winning soon!

The main event was a race of attrition. With one driver already out from the heat race – the crowd jokingly cheered on his detached back right wheel as it traveled the back-stretch and into the infield –  there were only four cars left. Hand started in the outside front row. Richard Ainsworth’s fast #13 spun out and was hooked off. Hand had to take his #66 to the pits and was done for the night. The #143 died out, which wasn’t good advertising, given the “For Sale” sign on the car. On the green-light restart, Robert Sanchez’s #5 car ran solo laps to get the green, white and checkered flags in succession.

The Mini-Sprints were anything but Mini! It was Girl-Power Night, and the poor boys were in trouble.  With about one lap left, Jonathon O’Brien’s #99 wiped out another car. On the single file restart, it was successive green, white and checkered flags. Coming out of turn four to take the win, while #1 and #2 slipped outside and the crowd was going nuts, Briana Franchini in the #5f somehow shot inside from third to take the win.

The Cruisers, usually an exciting bunch, only had four cars who finished the order they started, with the only excitement being when #1 and #2 lapped #3 and #4. At least no one got hurt.

The mixed Mods had Farmington’s Julie Keeler’s in the #97 A-Mod and Danny Gross, Jr., in the #143 X-Mod, and it is was a fun two-car race. There were two lead changes in the first lap. Keeler was running low through the turns, but she just couldn’t take the #143 in the 20 laps. After the race, Keeler accompanied Gross in his victory lap, which I thought a little rude, then the flagman threw down his checkered flag, so she could take a victory lap, too. Of course: they had each won their class.

So, the one A-Mod car wasn’t Clint Miller. Where is this Clint Miller guy? We couldn’t believe it when he flew out onto the track in his bright green Napa Auto Parts sprint car. Parker Construction was another sponsor. Miller had moved up to Sprint Cars! And he was starting in pole position. The cars were circling under a yellow pre-start flag. Wait … still yellow … Miller is lined up wrong and has to move to the outside of row 1. More yellow laps; come on, guys! What’s going on? Miller is moved to the outside of row 2. Okay, that’s not great, but finally a green flag start. Miller drops to fourth and is running well.  Despite his car’s steering seemingly “floppier” than the other cars through the turns, his motor and driving kept him in the running.

Then a shocker in lap 6. When you’re young, you watch racing for the crashes. When you’re older, the excitement of lead-changes, car mechanics, and driving skills are quite enough, thank you. So, when Ted Schlote’s #29 flipped end-over-end three or four times going into turn 3, the crowd gasped. Red flag.  Complete stop. The infield crew ran over and the word was that, unbelievably and thankfully, Scholte was just fine. The car, no. To give you some perspective, these powerful, fast Sprint Cars can be hoisted off the ground and carted away by a small tow truck. They cleaned up the parts from the track and restarted with Miller in fifth. He worked his way up and finished third.

The top three finishers parked in front of the stands and we got to go down to the track. Now, I studied soils (sand, silt, clay) in high school vocational agriculture and was on the FFA soil judging team, and when they say, “Clay Oval”, that’s exactly what they mean. The track is as solid as concrete but as slippery as ice. I honestly have no idea how they race on clay. We ran okay, slipped on over to Miller as he got out. Turns out this is only his fourth Sprint Car race. “Scary as hell?” I asked. He smiled, “Yeah”.  And then some seriously astute inquiry: “This isn’t Kelly, or Lime … what color green is this?” Miller: “I don’t know. I just picked the brightest green I had.”

Miss Sierra – ticket taker, score keeper, prize hander-outer, and water well and crypto expert – says to check them out on the web at racesandia.com or on facebook for faster results. I said that I’m not on facebook, and she said, “Oh, if you’re not on it, don’t get an account. They just track you.” See you at the races!