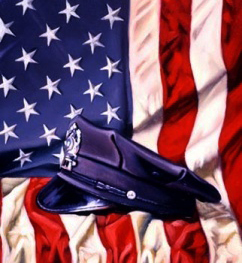 In honor of Police Memorial Day, the Los Alamos Police Department will host a public ceremony 9-9:30 a.m. Thursday, May 15 on the north side of the Justice Center near the flag pole at 2500 Trinity Dr.

The ceremony will honor those officers who have given their lives in service of others.

All citizens are encouraged to attend. In case of inclement weather, the ceremony will be moved indoors to the lobby of the Court complex.

Peace Officers Memorial Day and Police Week is an observance in the United States that pays tribute to the local, state, and Federal peace officers who have died in the line of duty. The Memorial takes place across the nation May 15, and Police Week is the calendar week in which the Memorial falls.

To pay tribute to the law enforcement officers who have made the ultimate sacrifice for our country and to voice our appreciation for all those who currently serve on the front lines of the battle against crime, the Congress, by a joint resolution approved Oct. 1, 1962 (75 Stat.676), has authorized and requested the President to designate May 15 of each year as “Peace Officers Memorial Day,” and the week in which it falls as “Police Week” and by Public Law 103-322 (36 U.S.C. 175) has requested that the flag be flown at half-staff on Peace Officers’ Memorial Day.

Amended in 1994, President Bill Clinton, through Public Law 103-322, directed that the flag of the United States be flown at half-staff May 15. According to a proclamation by George W. Bush in 2002,

“Peace Officers Memorial Day and Police Week pay tribute to the local, State, and Federal law enforcement officers who serve and protect us with courage and dedication. These observances also remind us of the ongoing need to be vigilant against all forms of crime, especially to acts of extreme violence and terrorism.”