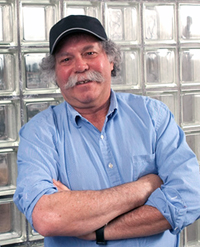 LANL physicist Albert Migliori, having led the development of a powerful tool for important measurements in condensed matter physics including superconductivity, is being given the Joseph F. Keithley Award For Advances in Measurement Science, the top instrumentation prize of the American Physical Society. Courtesy/LANL

Los Alamos National Laboratory physicist Albert Migliori, having led the development of a powerful tool for important measurements in condensed matter physics including superconductivity, is being given the Joseph F. Keithley Award For Advances in Measurement Science, the top instrumentation prize of the American Physical Society.

“Albert’s advances in measurement techniques for which he is being recognized by the APS are remarkable—both for the technology they embody as well as for the inspiring insights into complex materials, including plutonium, that they have enabled,” said Los Alamos Director Charlie McMillan. “Los Alamos’s role of using innovative science and technology to enhance national and global security is beautifully illustrated by this work. Al, his team, and the coordination with the National High Magnetic Field Laboratory here and in Florida, are deserving of recognition.”

“I could not have done the work leading to this without my teammates nor without the fabulous scientific environment and challenges provided by Los Alamos National Laboratory and the National High Magnetic Field Laboratory,” said Migliori. “Thus the prize is really to the Los Alamos National Laboratory and its close collaborator, the National High Magnetic Field Laboratory, for providing the resources and support, scientific and national security challenges, and stimulating environment that affirms the fundamental and outstanding intellectual quality and importance to our nation of both laboratories.”

The body of work that led to the award began with a project to develop Resonant Ultrasound Spectroscopy (RUS) for thermodynamic studies of high-temperature superconductors. The project required development by a team skilled in both theory and electronics and led to important measurements in condensed matter physics including superconductivity, where recent work has provided an accurate measurement of important properties of high temperature superconductors.

“As we built on our successes in basic science,” Migliori said, “it became clear that RUS could also be applied to many compelling problems in support of the Los Alamos national security mission.”

One example he notes is the first accurate measurement of the compressibility and shear stiffness of alpha, beta, and gamma plutonium throughout their entire range of existence, and for gallium-stabilized delta plutonium at high temperatures. RUS is also the only measurement that can track and measure the aging of plutonium in real time, which Los Alamos is doing now in support of the science campaigns and plutonium sustainment.

Migliori received his B. S. in physics in 1968 from Carnegie Mellon University, his M. S. and Ph.D. in physics from the University of Illinois in 1970 and 1973. He is co-discoverer of acoustic heat engines, a member of the Science Advisory Council for the National High Magnetic Field Laboratory (UF, FSU, LANL), associate director of the Seaborg Institute for Actinide Science at Los Alamos National Laboratory.

He is a leading expert in the use of resonant ultrasound spectroscopy as a solid-state physics tool for which he has won R&D100 awards in 1991 and 1994, a Federal Laboratory Consortium Award for Excellence in Technology Transfer in 1993, and a Los Alamos National Laboratory Distinguished Performance Award in 1994. He is a fellow of the Los Alamos National Laboratory, the American Physical Society, the American Association for the Advancement of Science, and the Acoustical Society of America. He is secretary and treasurer of the American Physical Society topical group on energy research and application.

He holds 25 patents, is the author of about 160 publications, six book chapters, and one book. Recent interests include elasticity of Pu, and state-of-the-art research and development of new measurement techniques.

The APS award is endowed by Keithley Instruments, Inc. and the Instrument and Measurement Science Topical Group (IMSTG). The award honors Joseph F. Keithley for his outstanding contributions and numerous accomplishments in area of sensitive and precision instrument development and measurement techniques. The award is made annually to one or a few individuals working in the same area for outstanding advances in measurement science or products that impact the physics community by providing better measurements. http://www.aps.org/programs/honors/awards/keithley.cfm