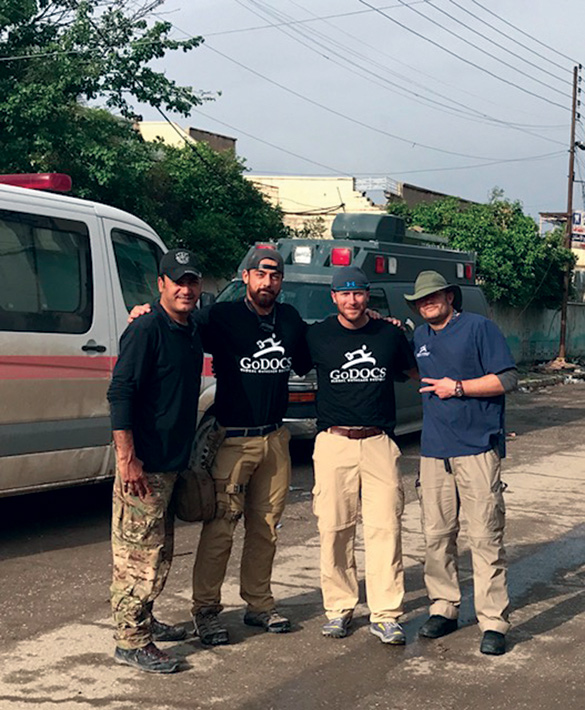 Los Alamos Medical Center Physician Christopher Hammond works with bullets slicing through the air and bombs exploding all around him. As a member of Global Outreach Doctors, Hammond is serving a three-week deployment in Iraq that includes two weeks in Mosul, a city engulfed in the war between ISIS and Iraqi forces.

He is joined by Tylerr Jones, a RN/EMT from White Rock. The two locals work with another Global Outreach Doctors member Derrik Ross, a paramedic from Melbourne, Australia.

“Our main purpose is to provide rapid trauma treatment to the soldiers fighting the frontline of the attack in Mosul,” Hammond said in an email to the Los Alamos Daily Post. “We can and have taken care of civilians but with increased security risks and suicide bombers we are mostly sending civilian injuries to other units staffed by local providers. We are embedded with an Iraqi military unit called the ERD, Emergency Response Division. These are front line fighters and many are severely injured or killed in battle.”

He added, “About 90 percent of combat injuries will die in the first one hour and our main job is treating the preventable deaths within 15 minutes of extraction. We mainly control hemorrhaging to extremity injuries and start resuscitations on chest and abdominal traumas. Meaning IV fluids and meds, chest tubes and airways to those needing it. We have also taken care of local civilians living in the area with kidney stones, scabies and mumps.”

Hammond, in his email, described his experience thus far in Mosul as “insane.” In the Facebook posts he shared with the Los Alamos Daily Post, he describes stretches of boredom that abruptly end when casualties come in with horrendous wounds. There are other moments as well when he shares laughs and conversations with members of the ERD.

In a post made April 13, Hammond wrote: “Today is slow and filled with boredom. We are passing the time fabricating ways to kill the damn flies. I am learning many short Arabic phrases and Google translate has made conversations far more possible. Many of the frontline and artillery soldiers come for basic medical care. Just as much as we love pictures with them sharing their culture, they love ours. I was wearing a beanie and they asked me to take it off and underneath exposed my bald head. They then proceeded to give me (a hard time) about how pretty their hair is compared to my bald head.”

Just three days later, on April 16, he wrote: “Last night began the heaviest assault we have seen yet. Under the cover of night our division, called ERD (Emergency Response Division) rallied to prepare for battle. There are 15 vehicles with soldiers piled on top with their arsenal of weapons. Cheering, chanting and praying loudly. I can feel and nearly touch the sense of excitement and pride in the air. But it is the fear and uncertainty that I can taste. It is almost sweet and sour with a bitter aftertaste that makes me ill.”

He continued, “Throughout the night gunfire and mortar attacks rain down lethal fire. This morning we are woken early to many casualties of the fighting. Men with mutilated amputations and high velocity sniper blasts flood our trauma unit. And these are the men I am here to help. To save the lives of those wandering toward death.”

Hammond said he has worked with Global Outreach Doctors for two months and this is his first deployment.

“I joined this organization specifically because their focus is on rapid disaster relief, which is mostly emergency and acute care, which is my speciality,” he said. “I decided to come to Mosul because, first of all, the opportunity presented itself shortly after joining and I have always had a desire serve internationally populations that have very limited access to care. I have also always had a desire to serve in combat and this is really the only way for me to do so at this time.”

“International humanitarian aid support is important to me. These people have very little access to healthcare and donations to organizations like GoDoc helps to pay for supplies and meds and to get medical personnel to the places they are needed most,” Hammond said.

Hammond has been an attending physician for six years. His speciality is Emergency Medicine and he trained at a level 1 Trauma center in York, Penn., just north of Baltimore. Hammond has worked at Los Alamos Medical Center for five years as well as at Presbyterian Hospital in Espanola. Additionally, Hammond worked at St. Vincent hospital in Santa Fe for three years.

Global Outreach Doctors, according to its website, is a team of dedicated volunteer medical professionals including doctors, nurses, paramedics, naturopaths, homeopaths, acupuncturists and psychologists. The organization works in almost every corner of the globe.