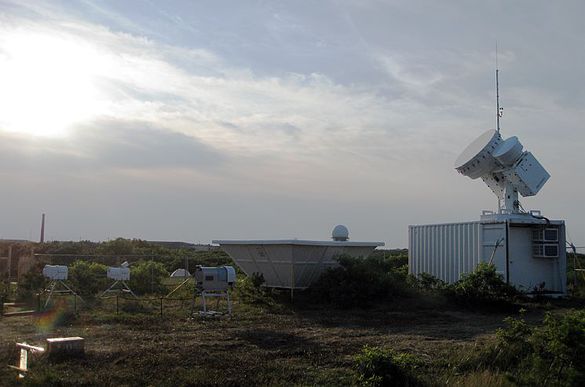 This observatory is part of an air particles research initiative at Cape Cod National Seashore in Massachusetts, and includes dozens of sophisticated instruments that take continuous ground-based measurements of clouds, aerosols, and other atmospheric properties. | Photo courtesy of the ARM Climate Research Facility. Courtesy/DOE

Specifically, experiments will use dozens of instruments on the ground and in the air to measure cloud properties and tiny particles in the air, such as dust, soot and sea salt—referred to as aerosols.

Addressing the question of how aerosols interact with clouds and change over time will significantly improve the accuracy of computer models that simulate Earth’s climate system.

“This research is critically important to better understand the Earth’s climate, including the intricacies of how aerosols and clouds evolve and affect the climate system,” said Dr. Bill Brinkman, Director of the Office of Science. “The experiment at Cape Cod will provide the data needed to increase confidence in the models that predict the future climate.”

This makes it in ideal location for studying aerosols in an environment with varying degrees of cloudiness, as well as clean and polluted conditions.

The full-year deployment allows researchers to obtain data spanning all four seasons, showing details of how aerosols change as they move from North America out over the Atlantic Ocean.

Sponsored by the Atmospheric Radiation Measurement (ARM) Climate Research Facility within the Department’s Office of Science, the yearlong experiment features a mobile observatory operating from a coastal bluff near the Seashore’s Highlands Center.

The ARM Climate Research Facility is one of the Department’s Office of Science user facilities, with heavily instrumented fixed research sites in Oklahoma, Alaska, and the tropical Western Pacific.

It also provides two mobile facilities and an aerial facility to support research around the world.

In addition, two research aircraft based out of Barnstable, Mass., are flying over the site and over the ocean to obtain similar measurements from the air in two “atmospheric columns.”

Research flights, coordinated by the ARM Aerial Facility, conclude at the end of July and resume in February 2013 for several more weeks.