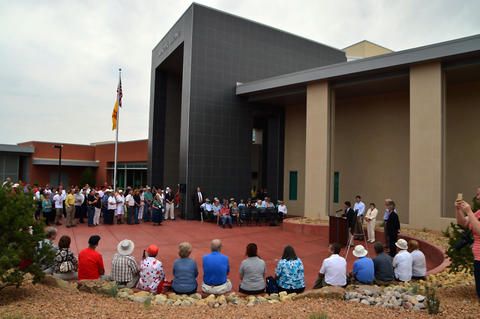 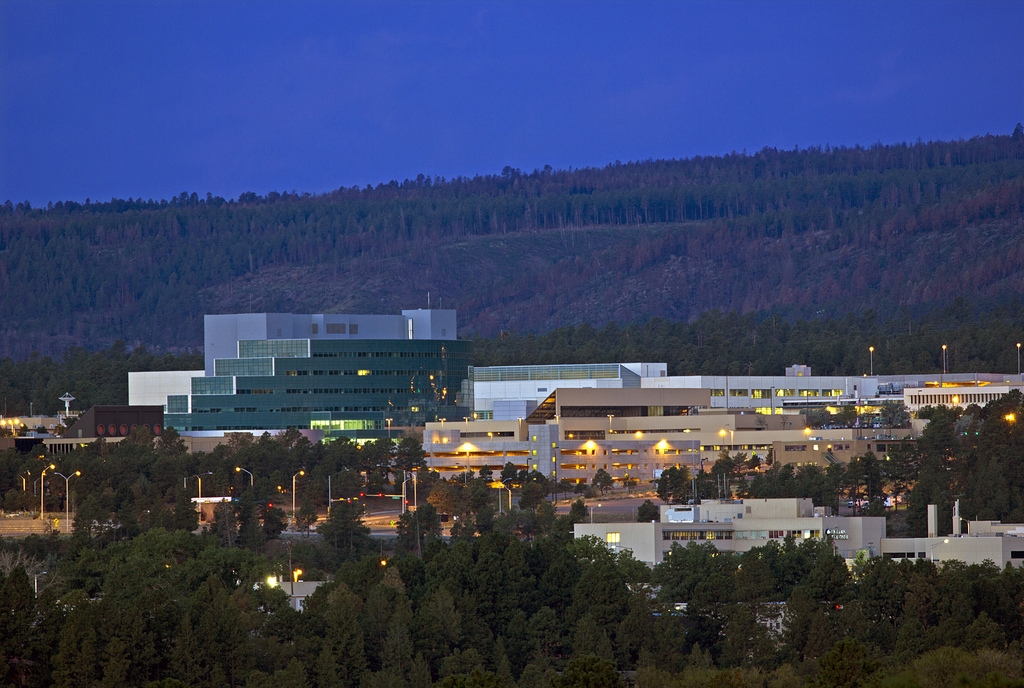 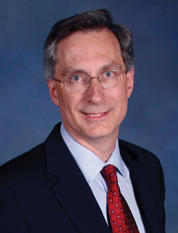 LANL Shutdown Averted: In an email to employees at Los Alamos National Laboratory Oct. 9, Director Charlie McMillan explained that because of the ongoing lapse in federal appropriations, the NNSA had directed all labs and sites to start preparing for the orderly closure of all operations except for those required to maintain minimum safety. Without a resolution to the budget impasse, Los Alamos would complete the transition to closure as of the end of business Friday, Oct. 18, however the shutdown was averted in the nick of time. http://www.ladailypost.com/content/nnsa-directs-labs-begin-preparing-possible-closure http://www.ladailypost.com/content/its-back-business-lanl-monday 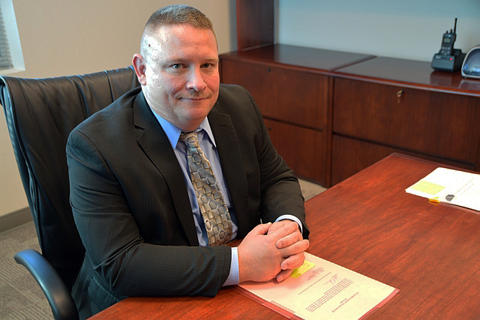 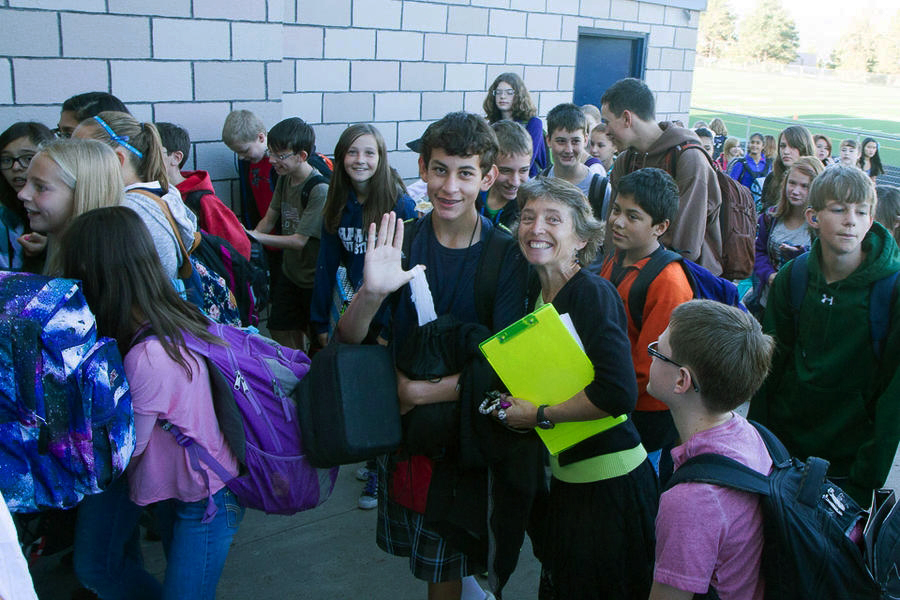 Middle School staff and students make their way into the gym. Photo by Salvador Zapien/ladailypost.com 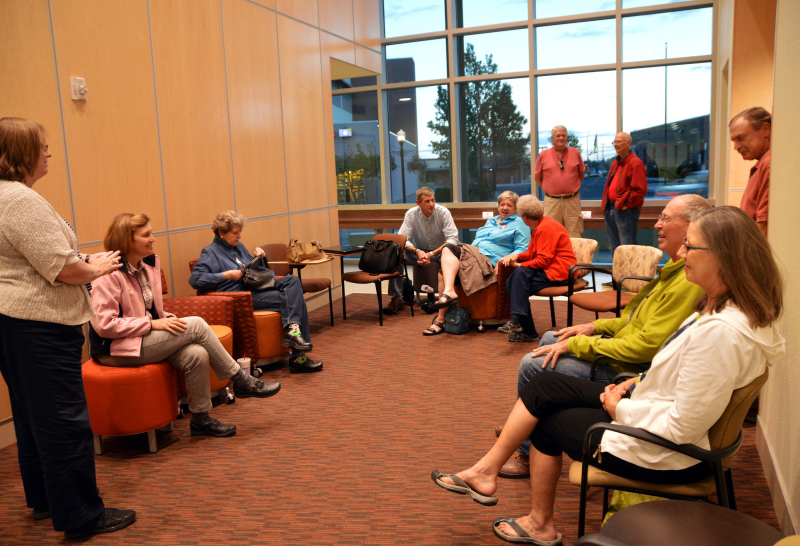 The crowd assembled in the lobby of the Municipal Building to hear the Mil Levy election results. Photo by Carol A. Clark/ladailypost.com

UNM-LA Mil Levy Fails: In a close vote, Los Alamos residents failed to pass the UNM-LA 2 Mil Levy by a 52.21 to 47.79 percent margin. Results from the Los Alamos County Clerk’s Office showed 2,662 ballots in favor of the Mil Levy and 2,908 against it on Sept. 17. http://ladailypost.drupalgardens.com/content/unm-la-mil-levy-fails 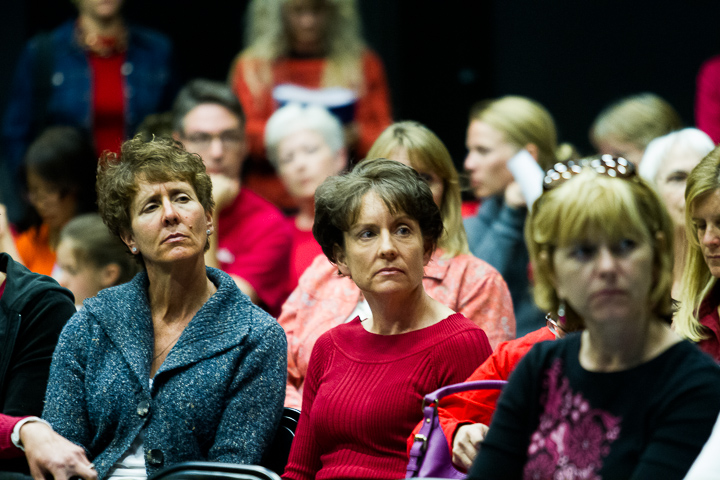 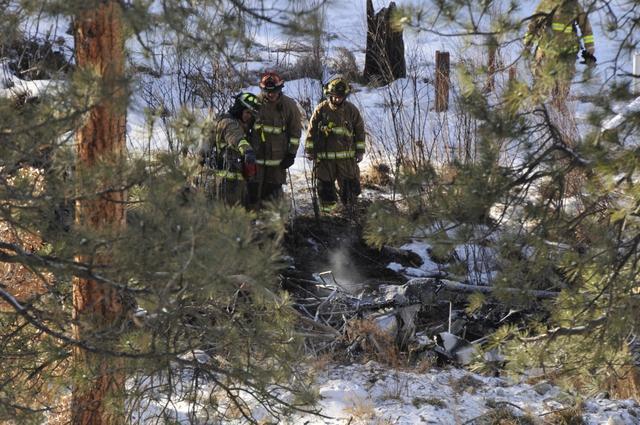 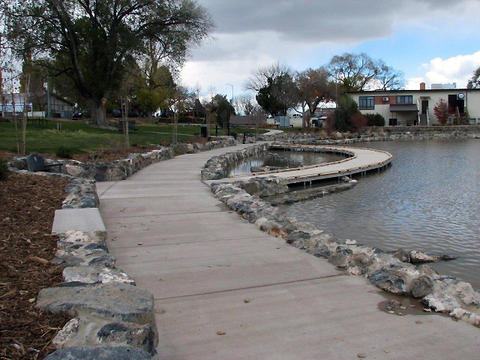 Improvements to Ashley Pond Park were completed in November. Photo by Leland Lehman/ladailypost.com

Ashley Pond Park Improvements: The Ashley Pond Park Improvements Project was completed in November and the Duck Buddies returned the ducks to the pond. The County will host a grand opening event around mid-May, when the wetland plantings will be completed. http://www.ladailypost.com/content/ashley-pond-improvements-project-nearly-complete http://www.ladailypost.com/content/ducks-return-ashley-pond 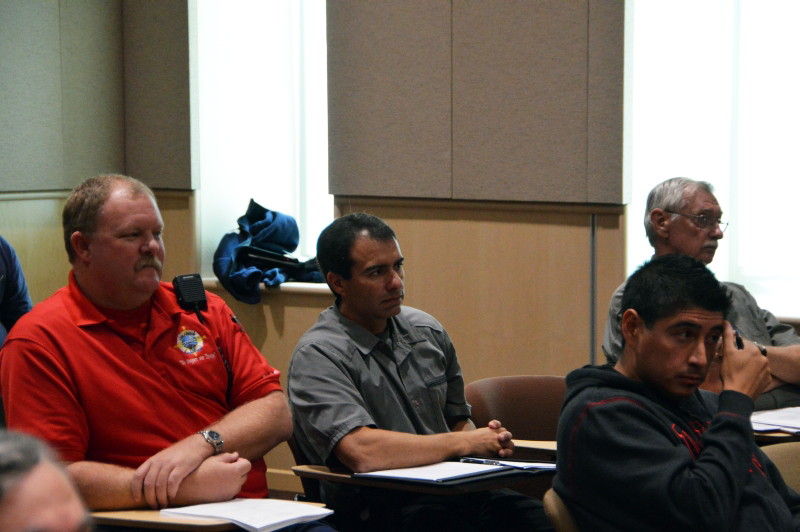 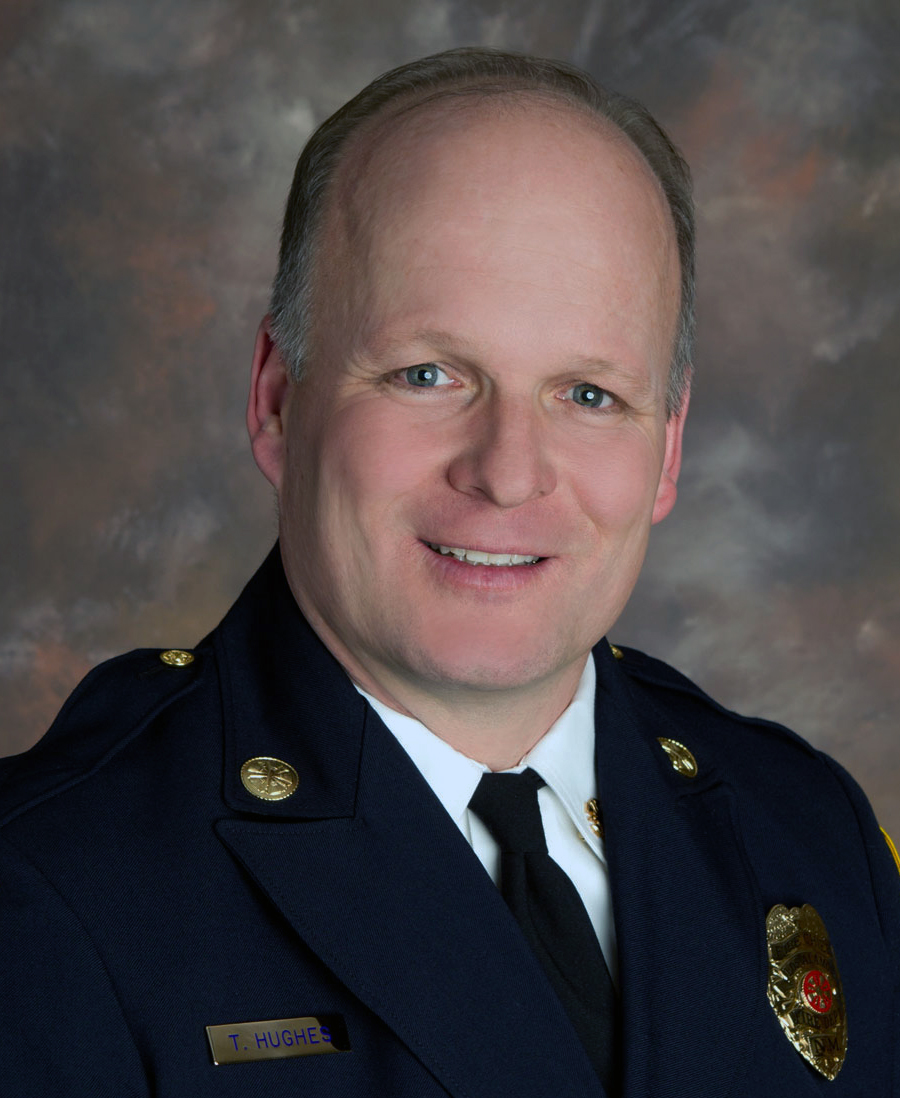 The range of Los Alamos research on HIV, the virus that causes AIDS, is significant, from groundbreaking vaccine concepts that are about to move into human trials, to computer modeling approaches to better understand how the virus moves through different populations. The Laboratory has long maintained the national HIV research database, in addition to the original research, and this year millions of readers worldwide had the chance to learn more.

Understanding how trees eventually fail in periods of drought and warming climate has been the focus of teams in the Earth and Environmental Sciences division. Computer modeling, as well as spectroscopic analysis of wildfire smoke plumes is providing additional insight into the broader effects of fires as they sweep across drought-stressed forests. Understanding the chemical components of wildfires, such as carbon-rich tar balls carried in the smoke, is among the advances made by Los Alamos researchers this year.

Wildfires may contribute more to global warming than previously predicted

ChemCam, the laser-wielding rock-sampler aboard the Curiosity rover, continues to prove its worth in NASA’s ongoing mission to determine the habitability of Mars. Already delivering more than 100,000 laser blasts since landing on Mars a year and a half ago, ChemCam has shown scientists that the Martian surface was once home to lakes and running streams, and that the planet’s rusty dust still contains enough water to possibly sustain future astronauts. With at least another year ahead in the mission, who knows what other secrets ChemCam and the other nine instruments aboard Curiosity will reveal as the SUV-sized science laboratory lumbers toward the towering Mount Sharp?

Los Alamos science sleuth on the trail of a martian mystery

Roadrunner, the first supercomputer to break the once-elusive petaflop barrier—one million billion calculations per second—was decommissioned on Sunday, March 31. During its five operational years, Roadrunner, part of the National Nuclear Security Administration’s Advanced Simulation and Computing (ASC) program to provide key computer simulations for the Stockpile Stewardship Program, was a workhorse system providing computing power for stewardship of the U.S. nuclear deterrent, and in its early shakedown phase, a wide variety of unclassified science. The IBM system achieved petaflop speed in 2008, shortly after installation. LANL will continue to push the frontiers of computer performance with its next machine, Trinity, slated to arrive at LANL in 2015. Trinity will be approximately 50 times more capable than Roadrunner.

End of the road for Roadrunner

October 2013 marked the 50th anniversary of the launch of the first Vela satellite to monitor a ban on nuclear weapons testing by the former Soviet Union, the United Kingdom and the United States. The event paved the way for improved science-based treaty-monitoring capabilities and helped keep the peace throughout the Cold War and into the modern age.

Space-based treaty monitoring technology also helped scientists discover insights into space, such as gamma-ray bursts, lightning and other phenomena. Last year, a Los Alamos instrument aboard the Van Allen Probes—a pair of twin satellites cruising in the hostile space environment within Earth’s radiation belts—detected an anomaly within the belts that gave researchers clues into how the belts form and change over time. These observations may help scientist develop effective ways of protecting sensitive satellites used for communications and other tasks from the ravages of high-energy particles that can destroy spacecraft without warning.

Researchers successfully demonstrated for the first time that laser-generated neutrons can be enlisted as a useful tool in the War on Terror. An international research team led by Los Alamos scientists used the short-pulse laser at Los Alamos’s TRIDENT facility to generate a neutron beam with novel characteristics that interrogated a closed container and confirmed the presence and quantity of nuclear material inside. The successful experiment paves the way for creation of a table-top-sized or truck-mounted neutron generator that could be installed at strategic locations worldwide to thwart smugglers trafficking in nuclear materials.

Los Alamos has successfully developed a system of smart telescopes that scan the skies for anomalous events—which could provide clues to clandestine nuclear weapons tests or breathtaking cosmic events such as supernovae. This year, the RAPTOR system captured and recorded the extremely rare occurrence of a star transforming into a supersized black hole that resides relatively close to our galactic home.

Tired of segregating all those little bottles of liquid in plastic bags for airline travel? Los Alamos scientists have developed a revolutionary scanner that combines X-ray technology with Magnetic Resonance Imagining (MRI) to screen liquids during airport security procedures. The machine can quickly and accurately distinguish between identical looking liquids that could be very different and potentially deadly. If implemented, the MagRay bottle scanner could eliminate the need to limit travelers to carrying miniature portions of their favorite liquids and personal hygiene items.

Los Alamos is a leader in alternative energy development

For years, scientists have been seeking efficient means to convert non-food-based biomass into fuels and chemical feedstocks, reducing fossil-fuel dependence and reducing greenhouse gas emissions. One of the stumbling blocks is finding ways to efficiently unravel the extremely tough fibrous materials within biomass and extract useful chemicals that can be converted into biofuels.

Numerous developments are underway at Los Alamos to fine-tune chemical processes that will yield sugars that can be distilled into fuel-ready alcohols, or to open chemical rings so that may be easily converted into biofuel precursors. Simplifying these processes makes biofuel conversion more energy efficient and environmentally friendly.