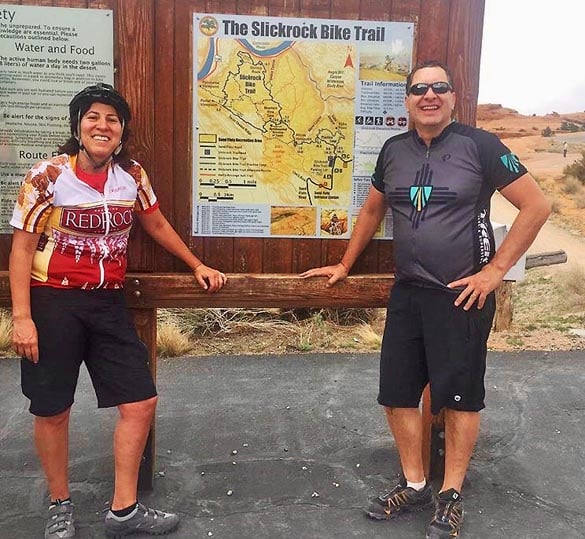 Los Alamos natives Roy and Yvonne Sanchez take a photo after biking in Utah this summer. The siblings will lead the Eldorado Eagles against the ‘Toppers this Friday. Courtesy photo/Facebook

Roy, a Los Alamos High School graduate, has been the boys’ head coach at Eldorado High School since 1994 and has compiled a 373-254 record and three state titles in those 24 years.

The Sanchez family moved to Albuquerque in 1981 and Yvonne found herself playing for legendary coach Don Flanagan at Eldorado High School. After high school, she played for the New Mexico State Aggies before getting into coaching. Yvonne was an assistant at New Mexico State, San Diego State and New Mexico before taking over the Lobo women’s program after Flanagan left UNM.

Sanchez coached the Lobos for five seasons compiling a 77-81 record, finishing in second place in the Mountain West Conference during the 2014-2015 season before being fired by then-athletic director Paul Krebs.

Coaching at a Division I level comes with plenty of pressures.

“The biggest pressure is to win at the expectations of others. I was fortunate to lead a program that I love in the University of New Mexico,” Yvonne said in a recent interview with the Los Alamos Daily Post. “We had some terrific accomplishments in our academics, we went to the MWC Championship game two out of five years and I averaged 19 wins my last two years before I was let go, and had the #1 recruiting class my last two years. Players graduated that completed their eligibility and were able to get jobs out of college or go on to play professionally and I still hear from those players to this day.”

“Also, a big pressure is to fundraise.  The budget was good but to compete we had to fundraise to compensate for going over budget.  I am proud to say I covered every expense and was always in the black,” added Yvonne about her time at UNM.

The past two seasons, Yvonne has been a volunteer assistant coach on her brother Roy’s Eagles varsity basketball team.

“It [has been] a terrific experience.  The players made it fun and they worked extremely hard, and Roy and I get along very well so there was never any conflict,” Yvonne said about coaching with Roy. “The bottom line is we want to win and help the players develop into good people as well. I know Roy does things the right way, so I would never have to compromise any moral values or lower standards just to get wins.”

When asked about her time in Los Alamos, Yvonne’s favorite memories include just hanging out in her neighborhood.

“There were a lot of kids and we did everything from riding bikes, playing hiding go seek, and all the in-season sports in the front yard or at the elementary school, which was called Mesa and is now the UNM branch across the street from the LAHS,” she said. “Also, all the sports that I played with everyone, from basketball, to Little League – I had some great coaches and it’s terrific that I still keep up with the guys I played with or against in Los Alamos.”

Other fond memories for Yvonne were going to the bowling alley and Tasty Freeze to play video games, or watching baseball on summer evenings with her friends, she said.

When asked about her future plans, Yvonne doesn’t rule out coaching at a collegiate level again, but said she is enjoying her time working with her brother right now.

“I have one more year to retire under the Educational Retirement Board. My plan is to finish up at Eldorado High School … I’m an educational assistant working with the Autism and Special Ed program.  After I retire I will see what is the best situation for me,” Yvonne said.

Roy and Yvonne will lead the Eldorado Eagles against the Los Alamos Hilltoppers at 7 p.m., Friday in Albuquerque.