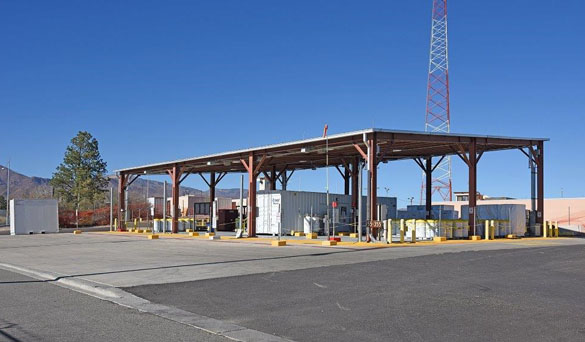 A hazardous waste permit modification for LANL requests three storage units at Technical Area 55, including the High Efficiency Neutron Counter Pad, shown here, which would be used as an outdoor storage pad. Courtesy/LANL

Among the many consequences of the Valentine’s Dayradiation incident at the Waste Isolation Pilot Plant in southern New Mexico in 2014, one necessity was a significant reworking of hazardous waste storage arrangements at Los Alamos National Laboratory’s Plutonium Facility. The lab’s signature plutonium processing facility, which has been mostly sidelined by safety issues since nearly a year before the incident, was the subject of a Jan. 31, 2017 permit modification application that has set in motion a formal review and approval process.

A required public meeting with a public comment component took place Wednesday evening at Fuller Lodge. An unknown portion of the modification package was classified as confidential and thus not included in the request, nor discussed in the tightly organized and informative meeting.

The changes included in the modification were driven in part by the need for additional space to handle current and future nuclear waste generated by past and future activities at the plutonium facility. Three additional storage units have been designated as storage areas for hazardous and mixed waste, but Keith Lacey of the facility’s hazardous materials managementgroup, said the primary purpose had to do with safety.

“First and foremost, it enhances safety, by reducing the number of container transfers,” he said. “A good example of that is at the High Efficiency Neutron Counter Pad also known as HENC.”

HENC is described as a concrete pad, 4 to 6 inches thick, containing a structure with a steel roof and roll up doors for wind protection. Formerly known as the Safe Secure Transit Pad and dates to 2005, it is the largest of the new storage units with about 13,000 sq. ft. of area. Two other areas also make use of existing spaces located in the basement of the Plutonium Facility’s primary room, PF-4.

Because WIPP is still not accepting waste from any off-site locations, and in view of limited options for temporary hazardous waste storage elsewhere at LANL, the three new spaces would hold waste containers awaiting WIPP characterization activities. Regular waste shipments from Los Alamos, containing mostly contaminated equipment and tainted supplies and debris, are not expected to resume until September this year and even then, according to the permit request, with sharply reduced shipment rates.

The projected rate of one shipment per week, according to the permit document, is well below historic levels and will not make much headway against the current inventory and projected waste generation. It may take “years to deplete LANL’s Tru and mixed transuranic waste inventory,” the permit-holders point out.

One subset of containers, amounting to about 300 canisterswill require further management at the Waste Characterization, Reduction and Repacking Facility (WCRRF) before shipment because of the revised requirements. Under new definitions, certain contents are considered potentially explosive until proven to meet theacceptance criteria.

Scott Kovac of Nuclear Watch raised a question about a seemingly steep increase in hazardous waste storage at the Plutonium Facility, which adds about 100,000 gallons of waste capacity. The change was described by Tammy Diaz of the LANL Environmental Protection Office, as increasing the capacity of LANL as a whole by 2 percent, within the requirements for the permit. Considering hazardous waste at LANL as a whole measures about 5 million gallons, the percentage is correct. But, Kovac noted the capacity of the three new spaces at PF-4 increased hazardous waste storage capacity at the Plutonium Facility alone by 50 percent.