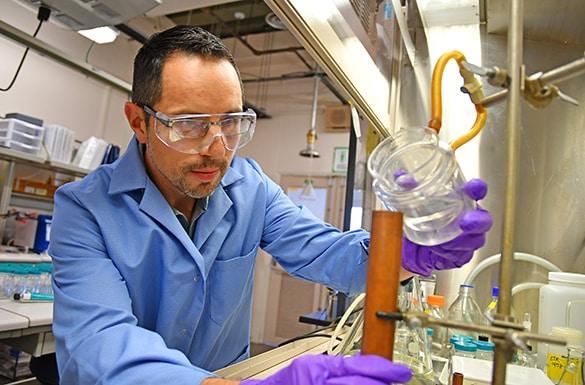 Scientists at Los Alamos National Laboratory and the U.S. Army Research Laboratory in Aberdeen, Md., have developed a novel “melt-cast” explosive material that could be a suitable replacement for Trinitrotoluene, more commonly known as TNT.

“The Army and the Laboratory, through the Joint Munitions Program, have been looking for a TNT replacement,” said David Chavez, an explosives chemist at Los Alamos. “Something with non- or low-toxicity that has the right melting point so it can be liquified and cast, for use in a variety of munitions.”

The new molecule is a nitrogen-containing compound called bis-oxadiazole. Chavez has been developing high-nitrogen explosive compounds for decades at Los Alamos, with particular emphasis on low explosive sensitivity and good environmental properties.

“One major challenge was coming up with a formula that would significantly surpass the explosive energy of TNT, but still have melt-casting capability” Chavez said. “When designing a molecule to be melt-castable, yet high performing, you typically encounter many challenges due to numerous obstacles.”

One of the biggest challenges was getting a high enough yield of the material out of the synthesis process. An early procedure produced only a 4 percent yield, far too low to be practical and affordable. After several iterations of the process the scientists boosted the yield to 44 percent.

Working with Jesse Sabatini and colleagues at Aberdeen, they developed a 24-atom molecule that’s packed with nitrogen, and has increased performance 1.5 times greater than TNT. The full chemical name is bis(1,2,4-oxadiazole)bis(methylene)dinitrate.

Research will continue with production of the material on a kilogram scale, a battery of explosive testing as well as future toxicity studies.

The Environmental Protection Agency has listed TNT as a possible carcinogen, and exposure to the material has been linked to disorders of the blood, such as anemia, and abnormal liver function, according to the Centers for Disease Control. TNT was first prepared in 1863 by German chemist Julius Wilbrand but its full potential as an explosive wasn’t discovered until 1891. TNT has been in use as a munitions explosive since 1902.

The research was published May 25, 2018 in the American Chemical Society’s journal, Organic Process Research & Development https://pubs.acs.org/doi/10.1021/acs.oprd.8b00076 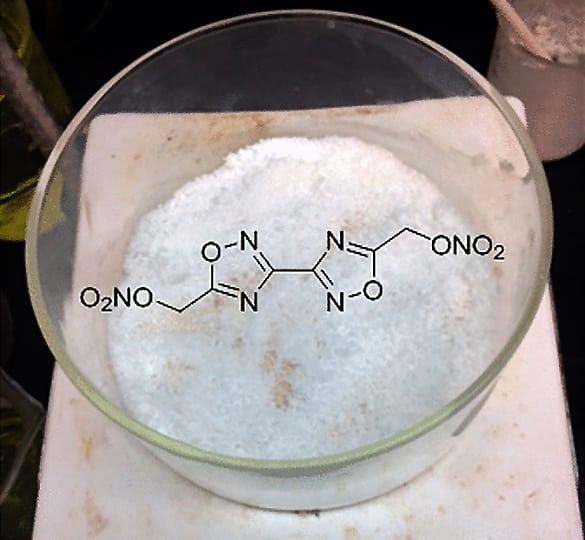 Oxadiazole has a calculated detonation pressure 50 percent higher than that of TNT. Courtesy/LANL 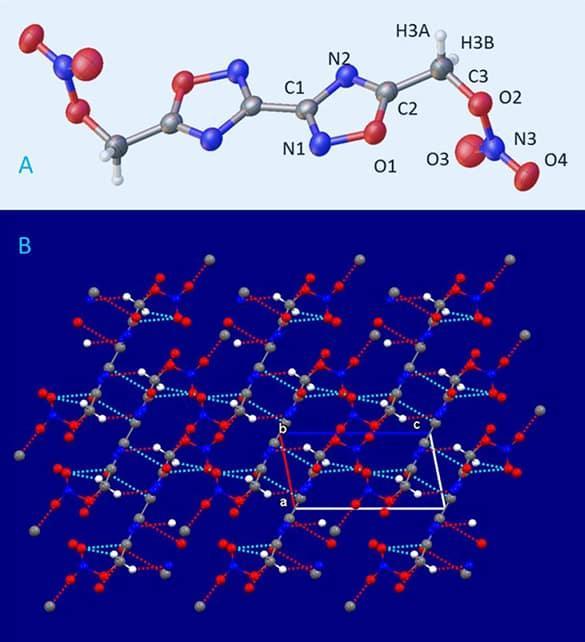