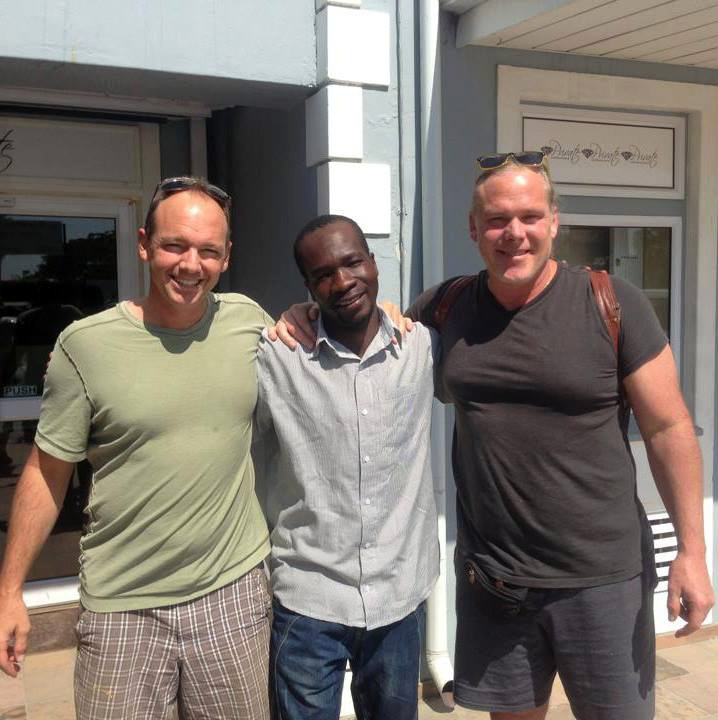 Editor’s note: Two brothers, Tom Gattis of Los Alamos and Bill Gattis of Gunnison, Colo., had an eye-opening experience in the third world when their mother, who lived in Botswana, became terminally ill. This is their story.

Our mother, Mary Lindsey (Gattis) had been spending her retirement in Africa, specifically Zambia, and later in the small, dusty town of Maun, Botswana. Mary was a math teacher at Santa Fe High School and Santa Fe Prep, and up until 2002, lived in a self-constructed plywood casita in Pojoaque and cared for the health of her mother until her mother’s death in 2001.

Mary wanted to spend her end game in the third world, living what you would call “the simple life.” She lived as an African, not as an American. She had a small room, with a communal outhouse and an outdoor water well in Maun.

Being a 6’-1”, 260 pound white woman with a booming school teacher voice, she became renown throughout the city for her inquisitive nature and her absolutely overwhelming spirit. Everyone knew who she was. They both feared her, and loved her dearly for her attempts to place everyone she came in contact with in this third world dust bowl on the right track, as any good school teacher would.

On Monday, Aug. 19, I got a call that Mary (our mom) was critically ill. I called my brother Tom in Los Alamos, and we booked flights for that night out of Albuquerque to JFK-Johannesburg-Maun Botswana, I drove six hours from Gunnison to Albuquerque, picking up Tom on the way. We took a red eye to JFK, had a three hour layover, took a 15 hour flight to Johannesburg and then a second flight to Maun, Botswana.

We were picked up by an Internet cafe owner and Adrian Chishimba , my mother’s caretaker and adopted son, at the airport. We got to the public hospital and found Mary in indescribable condition ─ spiders, roaches, no running water, no soap, dried blood stains and feces piled in the toilets. Her saline drip had expired, who knew how long ago? Mary was badly dehydrated. No nursing was available.

We talked to the doctor, who didn’t know her, even though he was taking care of her. He was covering the entire hospital.

We immediately arranged for transport to a private (but extremely small) hospital. We had to move her ourselves, including pushing the stretcher through the hospital and down a 200 foot ramp, because the elevator was not working. Then we had to hoist her unconscious 260 pounds into the back of a small cab.

She was in pain and could not speak except for an occasional moan. At the private hospital, we had to pay up front. Two nurses helped get her into a tiny, but clean room.

The doctor helped us find a hotel, as it was late and we had no idea of where we would stay. Tom joked that he was going to sleep with the goats on the main road. We got to bed after a 49 hour day, not haven eaten the whole time.

I suspected Mary had a stroke, but no doctor had made this diagnosis. We decided to take Mary home for comfort care the next day. We started by cab, but when nurses and bystanders saw the absurdity of the five of us being hardly able to fit her into the back of a standard sedan, they got an ambulance for us. Having a comatose woman in a hospital bed directly on the corner of the busiest intersection in Maun was probably bad publicity for the hospital. 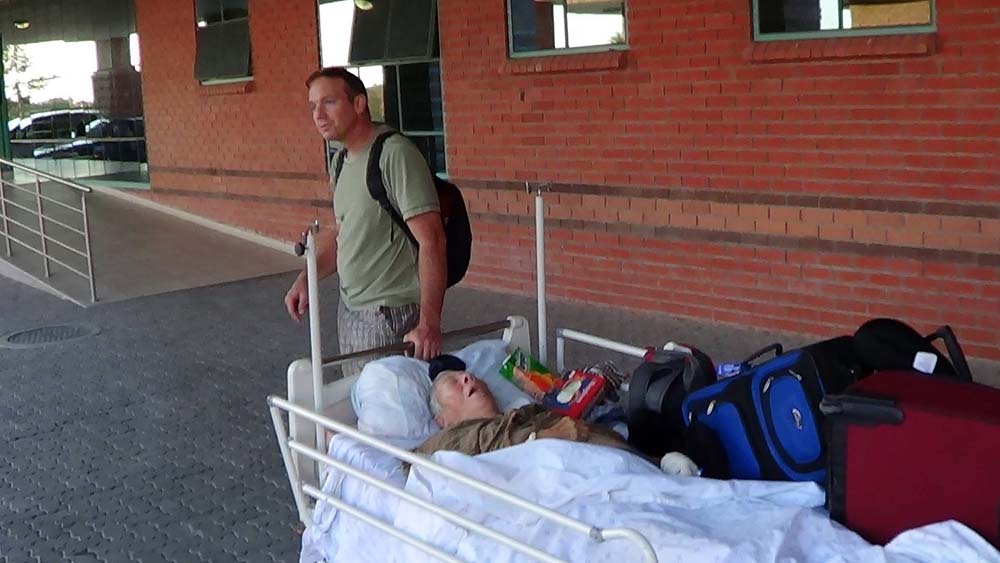 The ambulance had no equipment, not even oxygen. Pieces of random parts and metal were strewn in the back of the ambulance. We arrived at a sandy compound with a primitive room. Mary had some lucid moments and we were able to say goodbye before she passed away. 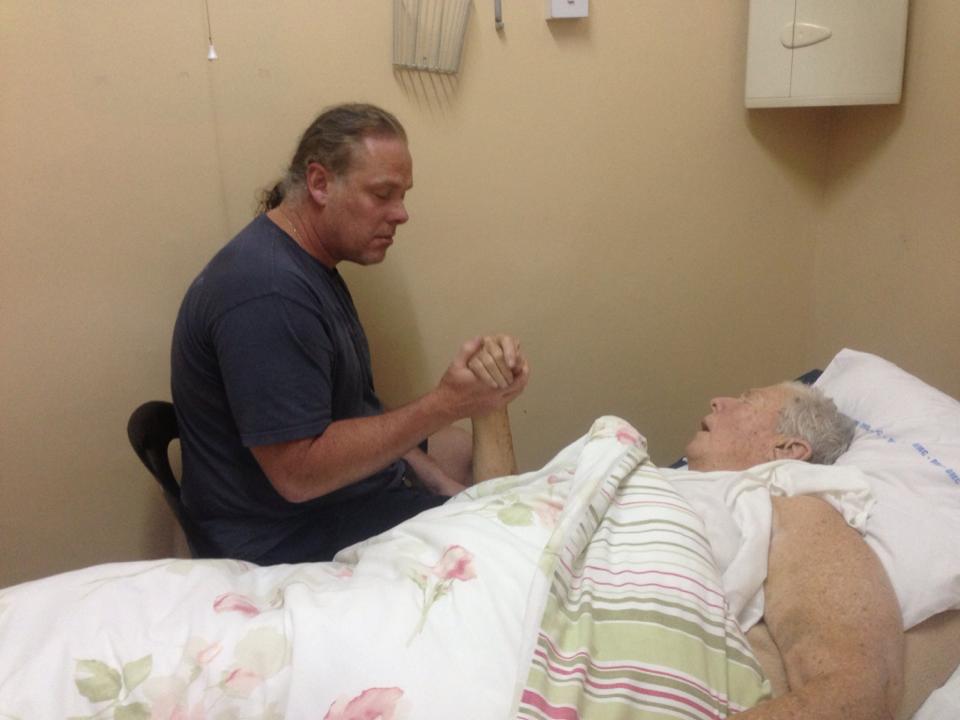 Then followed the epic process of getting the body, first to the awful public hospital for certification of death in a cab (with me under the body, maintaining some kind of dignified position for it), carrying it into the ER and waiting for the doctor to give us a little slip of paper certifying death.

There was no ambulance or hearse to take the body to the funeral parlor. We finally got hold of a driver for the funeral home. At the funeral home, only two people were there. Tom, Adrian and I, with the help of those two employees, lifted Mary to a metal tray and put the tray in the refrigerator. Mary couldn’t be cremated until we had the official death certificate, which wouldn’t be available until Monday.

On Sunday Aug. 25, we went out to Mary and Adrian’s place and began going through her things. At 6 p.m. we held an informal wake with catering for 20. Twice as many people as we invited showed up, some filling their plates and even bags with catered food. Tom, Adrian and the matriarch of the compound didn’t get to eat. I tried to think of what Mary might have said, and say nothing.

On Monday, Aug. 26 we were frantically trying to get Mary cremated and the ashes back to the U.S. We went to get the death certificate and got completely different instructions, which required running around town to more bureaus all morning. Then we got email from the consulate that we actually needed three more documents, from the doctor at the private hospital, the funeral home, and a letter of conveyance from the office of the supreme leader of South African Botswana! We notified the U.S. Embassy and the ambassador was willing to help.

We were also taking care of a devastated Adrian, trying to make sure he and his belongings got onto a bus to Lusaka, Zambia, so that he wouldn’t be alone in this foreign country, grieving for Mary.

On Tuesday, Aug. 27, we began getting texts from Mary’s landlord and her daughter. They wanted more money than they had originally agreed to and wanted Adrian to stay and make repairs. They threatened to have Adrian arrested.

Tom came up with a great plan. Adrian would fly with us to Johannesburg and from there to Lusaka. We would keep it secret that night and the next day. It was Adrian’s first airplane ticket. I hid Adrian’s belongings outside the hotel room in a safe spot, and we made plans for how we would get him to the airport the next day without being seen. We knew that Mary would never have let Adrian be arrested. She would have stood between the police officer and Adrian and protected him. Tom and I would do the same.

On Wednesday, Aug. 28, we got the final document to have Mary’s ashes transported with one hour to spare before we had to leave for the airport. We got to spend 10 more hours with Adrian. On the plane, he said that he felt like Obama. He saw a cloud in the distance and said, “there is God.” Tom and I were able to escort him to the gate for his final flight back home and say goodbye.

Adrian continued to text us for the next 24 hours. He was lonely without “professor,” as he called Mary. But he made it home safely, and immediately started making cement blocks de novo with river sand and concrete.

We finally got back to Los Alamos very late Thursday night, Aug. 29, and slept for 14 hours straight.

We miss Mary, I find it hard to believe that she is not still on the other side of the world, writing letters, emails and books inside the primitive house. I can only imagine how much Adrian is missing her. He took such amazingly loving care of her.

My brother and I are continuing to help Adrian build his dream ─ owning rental property in Africa. We hope that one day, we can bring him here to visit, and to take back to Africa with him a new hope of a brighter and more prosperous future. Certainly, our trip has made us appreciate what we have and it has given us the opportunity of helping some of the most poverty stricken people on earth. 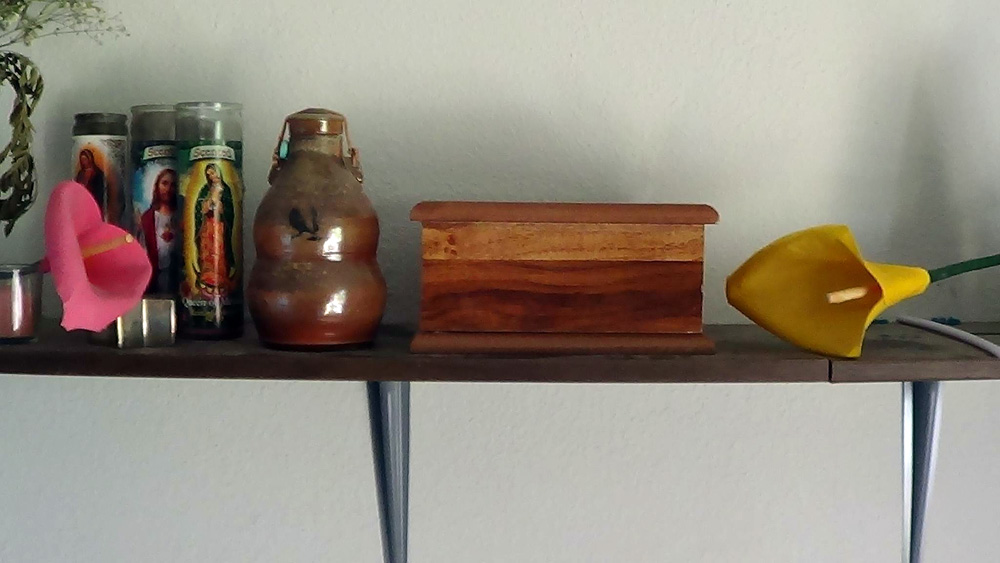