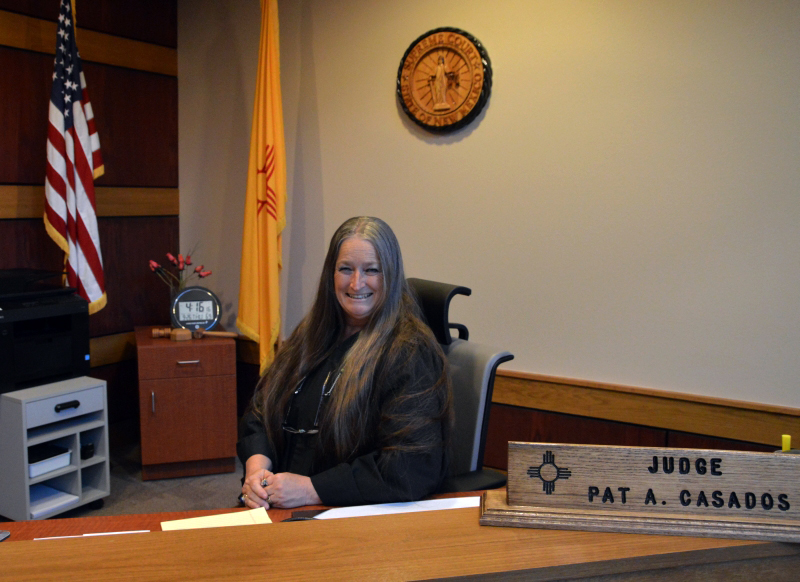 Los Alamos Magistrate Judge Pat Casados in her courtroom at the Justice Center. Photo by Carol A. Clark/ladailypost.com

The election for Los Alamos Magistrate Judge is November 2014 but candidates must file in March.

“After attending the recent judges conference, I came back with renewed enthusiasm … I’ve made a lot of progress and I want to see the projects I’ve started be completed,” Casados said. “Also, I’ve been assigned to mentor new Judge Keith Rogers from Chavez County in Roswell and I feel that I still have things to contribute to my community and I still love my job … all of that makes me want to serve four more years.”

First elected in 2002, voters returned Casados to the bench for another eight years in back to back elections. During that time she has married 320 couples and heard thousands of cases including traffic, misdemeanors, DWI, domestic violence and civil. The excuses she’s been given by defendants run the gamut, she said, including the time a man explained his reason for speeding was that he was “stretching his foot.”

“One of the hardest parts of being a judge is keeping a straight face,” Casados said. “Sometimes you want to laugh or cry or get angry, depending on the case, but you cannot.”

Casados just completed a four-year term with the New Mexico Magistrate Judges Association and has been re-elected secretary/treasurer for another term. She hosted the association state meeting in Los Alamos July 12 in which 16 fellow judges along with members of the Administrative Office of the Courts spent time in town and enjoyed their stay, she said. The association has a new president this year, Judge Duane Castleberry from Clovis.

Casados spoke of her sister who served as a judge for several years and is now retired and also of her father.

“My father’s word is his bond … I watched him make cattle deals at our kitchen table when I was growing up,” she said. “I’ve always tried to honor that as well.”

Casados has strong support for her re-election from her family including husband Jeff. He retired in May 2012 from Los Alamos National Laboratory after 40 years of service.

“Jeff told me that he knows how much I love the job and he wants me to be happy,” Casados said.