Los Alamos Little Theatre Opens Season With ‘Not Quite Right’ 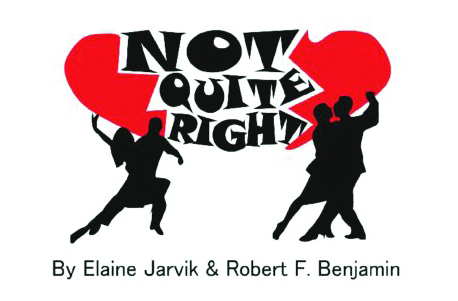 The risk in watching Los Alamos Little Theater’s “Not Quite Right” is that you might see a glimpse of your own family in the spotlight.

Luckily, “whatever your generation or family relationship,” said actor Eric Bjorklund, who plays Marty in the September production, “someone onstage is arguing from your point of view.”

When the play opens, Marty, a man “too old to be quick and too young to retire,” sits in his garage in the middle of the night, playing with a couple oven mitts. At 58, Marty’s still not quite sure what he wants to do when he grows up. He’s learning pottery and sky-diving, much to his wife’s dismay, and considering a career in comedy.

The play’s title refers to a piece of pottery Marty had just made that his wife Carol describes as looking like “an old shoe of someone who pronates.” “The pot becomes a metaphor for the characters themselves and their relationships — functional, but far from perfect,” Bjorklund said.

In addition to Bjorklund, the ensemble cast includes Dana Kline as Carol; Holly Robinson as Jessica, Carol and Marty’s adult daughter and a mother of two young children; and Brian Trujillo as Andrew, Jessica’s husband, who would like to expand their family, despite his wife’s grave concerns about overpopulation.

The show also stars Gwen Lewis as Sally, Andrew’s mother and the family peacemaker, and Thomas Farish as her husband Tom, recently and awarded “Administrator of the Year,” much to his complete lack of excitement.

“I think people will relate to the issues brought up and the humor of the play,” Lewis said. “Who should be the main money-maker? Should people conform to please society?”

“There is no one way to be a parent or a spouse,” Robinson said. “The point is to live life as authentically as one can.”

Robinson described her character as a “Modern Woman” who “doesn’t bow to antiquated ideas of what society think a woman and a mom should be … I hope that we will be able to help younger couples see that they do not have to follow a specific formula when it comes to family — that they can make their family any way they want.”

Farish said the play will appeal equally to older audiences.

“How many of us had great dreams when we were younger? How many of us realize that only one percent can be in ‘the one percent’?” he said. “How many of us try so hard to impart our wisdom and hard-earned experience to our kids, only to have them go off and make the same stupid mistakes we did?”

Whether old or young, “anyone who’s been in a relationship for many years will recognize the push and pull of love, commitment, independence and compromise,” Kline said , as well as “the struggle for who we are together, who we want our partner to be, and who we want to be ourselves.”

Director Dennis Powell said audiences will love the play because of “deep humor that accrues to situations familiar to everyone … It is the playwrights’ connections in our community that breathe life into this play. If there is any small town that has stressed and fragile relationships, it’s ours.”

“Among my life’s biggest concerns is the simple question, ‘What is enough?’” said Robert Benjamin, one of the co-writers of “Not Quite Right.” “All six characters try to answer this question from different perspectives. I hear echoes of my own answers from different stages of my life.”

“The theme of wondering if what you have is enough is a universal one. And the older we get, the more time we’ve had to get bogged down in those feelings — and hopefully to move past them,” co-writer Elaine Jarvik added.

Looking beyond the scope of the current show, both Benjamin and Jarvik lauded theater as an important and pleasurable part of community.

“What I enjoy about theater is the chance to sit with strangers in the dark and watch a story unfold, alive and in the present — with all the enchantment, energy, enlightenment and danger that entails,” Jarvik said .

Benjamin called theater a “magical medium from which a community gains important insights about itself. During a two-hour performance, audience and cast meld into a community within their larger community, while they watch, listen and sense each other’s responses to a shared story. A good play is the beginning of a conversation — often of a conversation that a community finds difficult to have about its own values and habits. Theater is catharsis.”

Audiences will remember Benjamin, who resides in White Rock, from “Time Enough” (2008) and short plays “Yogurt Security,” “Mesa by Moonlight,” “Gorilla Tactics,” “Sunrise at Otowi Bridge” (performed at Science Fest 2015), and many others. Jarvik’s “Dead Right” and “Music. Poem. Music” have been produced at LALT, as well as “Stuck” and “Working Out,” which are collaborations with Benjamin.

LALT will present “Not Quite Right,” produced by Jeanne Adkins, for three weekends at 1670 Nectar St. Catch this comedic, inter-generational drama at 7:30 p.m. Fridays and Saturdays Sept. 9-10, 16-17, and 23-24, and at the 2 p.m. matinee Sunday, Sept. 18. Tickets are $14 for adults and $12 for students and seniors and may be purchased at the door or in advance at CB FOX or from Brown Paper Tickets. A special preview matinee show is 2 p.m. today at the Toolshed Theatre, Dixon. Tickets are $10. Visit lalt.org for more information.